Asian Cup: 'The Game Is Played On The Field, Not On Paper', Constantine On UAE Match

A win against the hosts, and India will be in a prime position to qualify for the knock stage with two wins from two outings. 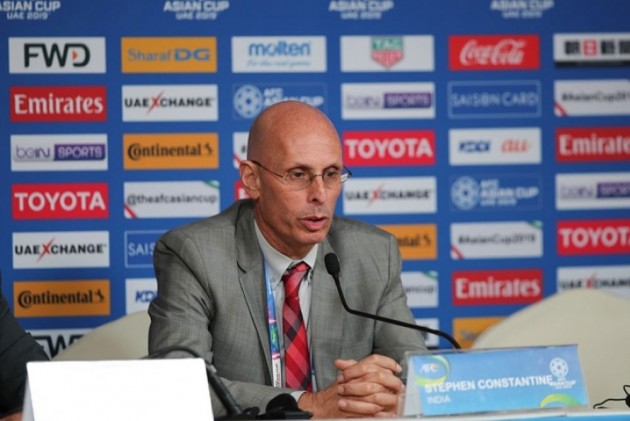 India won their opening group match, thrashing Thailand 4-1. But the UAE will be a different opponent altogether, considering not only their quality but also the physical presence.

But Constantine is confident that India will give the hosts a tough match, and stressed that the "game is played on the pitch, not on paper." A win against the hosts, and India will be in a prime position to qualify for the knock stage with two wins from two outings.

Not Getting Carried Away With Win: Constantine

AFC Asian Cup 2019: When And Where To Watch India Matches

Blue Tigers Light Up Blind Football With THIS Heartwarming Gesture

All Indian Goals Against Thailand Were Brilliant: Shyam Thapa

"We know all the three games are going to be very tough. There'll be no easy game at this level. But we'll go toe-to-toe with them. A game is not played on paper, but on the pitch. The UAE are the hosts and will be under pressure. It’s understandable they will go for all three points."

"They are a physical, as well as a skilful side. I am not worried about our fitness. We have to play our best game to get the result,” Constantine told AIFF.

Yes, on paper UAE are far more superior side. They are currently ranked 79 in the FIFA rankings, and have been on the winning side on eight occasions against India out of 13 matches played between the two sides.

The last encounter between these two sides which took place at the Ambedkar Stadium in New Delhi in 2011 had ended in a 2-2 draw, with the last goal being scored by Jeje Lalpekhlua.

And Jeje, who scored a delightful goal against Thailand, will once again be crucial to India's fortunes.

"Jeje is a very good player. But unfortunately, he did not have much game time recently. You put Jeje in the position and he will score for you. I was so happy that he scored the goal against Thailand. He deserves to get the goal, especially at this level," Constantine added.

Talking about skipper Sunil Chhetri, the Briton said that Sunil Chhetri, "he has always given everything whenever he has played for the National Team. I can't complain about this. He is there to do his job and his job is to score goals. He has a phenomenal scoring record and we're better with him in the team."

Chhetri opened the floodgates against the Thais, first scoring the opening goal from the penalty spot, then adding a second just after the restart restore the lead again.

"Against Thailand, we gave the ball away too many times which put the opposition in an advantageous position. We have to look after the ball better. I feel we started a bit nervous. Some young boys were too eager to press. We can't repeat it against UAE," the 55-year-old said.

By the way, India have defeated the UAE three times, and both the sides have been runners-up once in the tournament.

The match will be played at Sheikh Zayed Sports City Stadium, Abu Dhabi. The kick-off time is 9:30 PM IST.

It will be available live on Star Sports 2 and 3, and Doordarshan. It will also be streamed live on Hotstar.