After six days of competition, India grabbed 7 gold, 10 silver and two bronze. The gold count was same as in 1978 and 2002 Asian Games but India had won a total of 17 medals in these two earlier editions as against 19 this time. 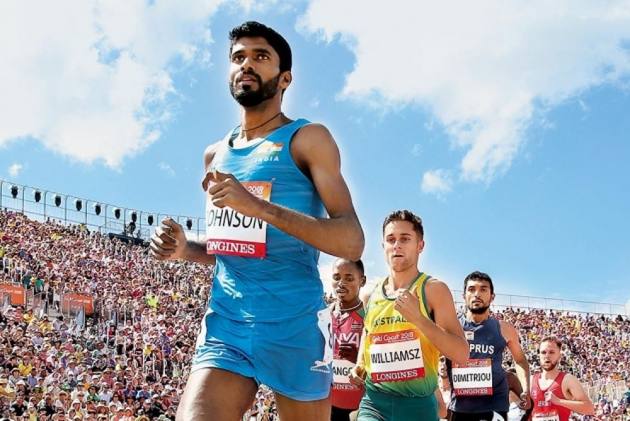 The Indian 4x400m women's relay team on Thursday clinched its fifth consecutive Asian Games gold medal to maintain a remarkable domination in this event while Jinson Johnson won the men's 1500m final race as the country produced its best ever show in athletics since the inaugural 1951 edition.

After six days of competition, India grabbed 7 gold, 10 silver and two bronze. The gold count was same as in 1978 and 2002 Asian Games but India had won a total of 17 medals in these two earlier editions as against 19 this time.

In the inaugural edition in 1951 held in New Delhi, India had won a total of 31 medals from athletics, including 10 gold. In 1982, India had won 20 medals in athletics but there were only four gold, the rest being eight silver and eight bronze.

India won five medals on the final day with Jinson winning the gold in the men's 1500m to make amends for the silver in the 800m before the women's team narrowly missed the Games record in their comfortable victory in 4x400m relay.

Jinson was pipped for gold by compatriot Manjit Singh in the 800m race but today he did not give any chance to his rivals to win the race in 3 minute 44.72 seconds. He crossed the finishing line after creating a huge opening in the last 80m stretch, leaving behind Amir Moradi (3:45.62) and Mohammed Tiouali (3:45.88).

Manjit Singh, who emerged a surprise winner in the 800m run, finished fourth with a timing of 3:46.57.

Young sprinter Hima Das won her second Asian Games medal, and this time a gold, as the Indian women's quartet of Hima, M R Poovamma, Sarita Gayakwad and V K Bismaya faced no competition as they easily took the gold.

It was the fifth gold medal on the trot for India in 4x400m women's relay, continuing with their domination since the 2002 Asian Games.

The individual 400m silver winner Hima, who began first, provided a handsome lead to Poovamma, who maintained it and passed on the baton to Sarita. The Gujarati girl too remained strong in her lap and Vismaya comfortably finished the race.

Meanwhile, discus thrower Seema Punia and middle-distance runner P U Chitra had to be content with bronze medals.

Seema could not defend the gold she won in 2014 as China's Asian champion Chen Yang hurled the disc to gold winning distance of 65.12 in her last attempt, which was a huge 2.86m more than the Indian.

Diminutive Chitra, who won gold in the Asian Championship last year in Bhubaneswar, clocked 4:12.56 to win a bronze, her first Asiad medal.

The men's 4X400 relay team though had to be content with a silver behind a dominating Qatar.

Kunhu Muhammed ran the first lap, followed by Dharun Ayyasamy but by the time the baton reached Anas, Qatar was pulling away. The Indian team was placed fourth at that time but Anas pulled off a great run to pass two runners and Arokia Rajiv managed to maintain the second position