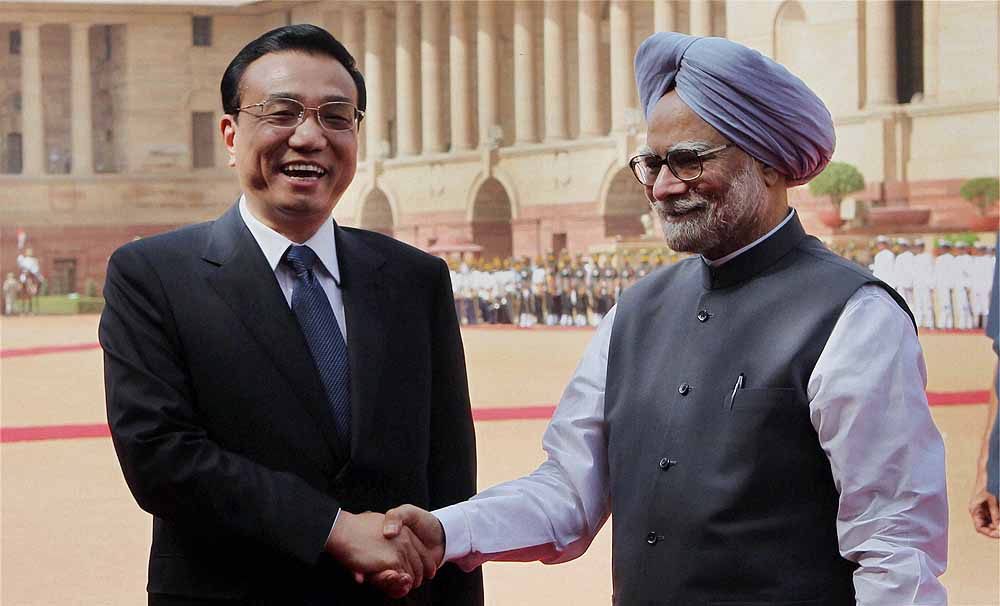 With China’s aggressive assertion of its territorial claims causing general concern, it has taken to wooing one of its major rivals— India. While not spurning China’s move, India is striving to broaden its diplomatic and military support.

After ignoring India and its security concerns, Beijing’s new political leaders decided to make India a foreign-policy priority with the Chinese premier selecting India for his first foreign visit. Days after the Chinese incursion into Indian territory, the Indian prime minister, though, travelled to another rival of China’s— Japan— and even extended his planned visit by a day. And as the Indian prime minister landed in Tokyo, the Chinese media attacked Japan for vitiating Indian minds against China. All this, in a matter of weeks!

The 20-day standoff between Chinese and Indian soldiers in the western sector of their disputed boundary in Ladakh has exacerbated distrust between the two nations. Chinese Premier Li Keqiang’s visit to India in May was supposed to assuage Indian anxieties. But Beijing has failed to explain why the Chinese soldiers took the provocative action. During Li’s visit, India did not receive a satisfactory explanation, only a reassurance that the two sides should continue to talk about the border problem.

The Chinese premier did offer India a “handshake across the Himalayas,” underlining the need for the world’s two most populous nations to become a new engine for the global economy. But there was no breakthrough on key issues bedevilling Sino-Indian ties. Given the serious nature of bilateral problems, the three pacts signed during Li’s visit were rather lame, aimed at boosting the export of buffalo meat and fishery products from India, and other trade in health products. Border disputes threaten the Sino-Indian bilateral relationship. But the Indian prime minister and Chinese premier could only ask their special representatives to examine the existing mechanisms and devise more measures to maintain peace along the border— hoping to reinvigorate boundary negotiations that are at a virtual standstill despite 15 rounds of talks.

Bilateral trade is touching $70 billion mark with the two states aiming for $100 billion by 2015. But Indian companies want better access to the Chinese market, and New Delhi remains concerned about the ballooning trade deficit in China’s favour. India also has concerns about the effects on lower riparian states of activities in the upper reaches of shared rivers and wants greater Chinese transparency on Beijing’s plans to develop water resources of the Brahmaputra River. Li’s visit did not result in a full river treaty, as many in India had hoped, but Beijing agreed to share data on river flows. China remains noncommittal on providing advance information on the construction of dams on rivers leading to India.

Longer-term implications of the border crisis remain unclear, but new robustness in India’s dealings with China was evident during Li’s visit. India was vocal in demanding reciprocity and made it clear that peace on the border remains the foundation of the relationship— and that other aspects of relations will suffer if incidents like the Chinese incursion into Despang Valley continue.

Beijing was keen that the joint statement endorse its position on the South China Sea issue, but New Delhi insisted on just mentioning the Asia-Pacific. The two sides merely underlined the need for the region “to maintain peace and stability of the region, promote regional common development, as well as to establish an open, transparent, equal and inclusive framework of security and cooperation based on the observance of the basic principles of international law.” India also refused to reaffirm support for the “One China” policy and Tibet’s status. Since 2010, India has avoided reaffirming this commitment and argued that Kashmir is as much a core concern for India as Tibet is for China. As such, New Delhi has decided not to make any unilateral commitment on Tibet; this was reflected in the omission of Tibet from the joint statement issued during Li’s visit. Meanwhile, spurred by the Ladakh incursion, New Delhi lost no time in ramping up infrastructure and military deployment along the border. 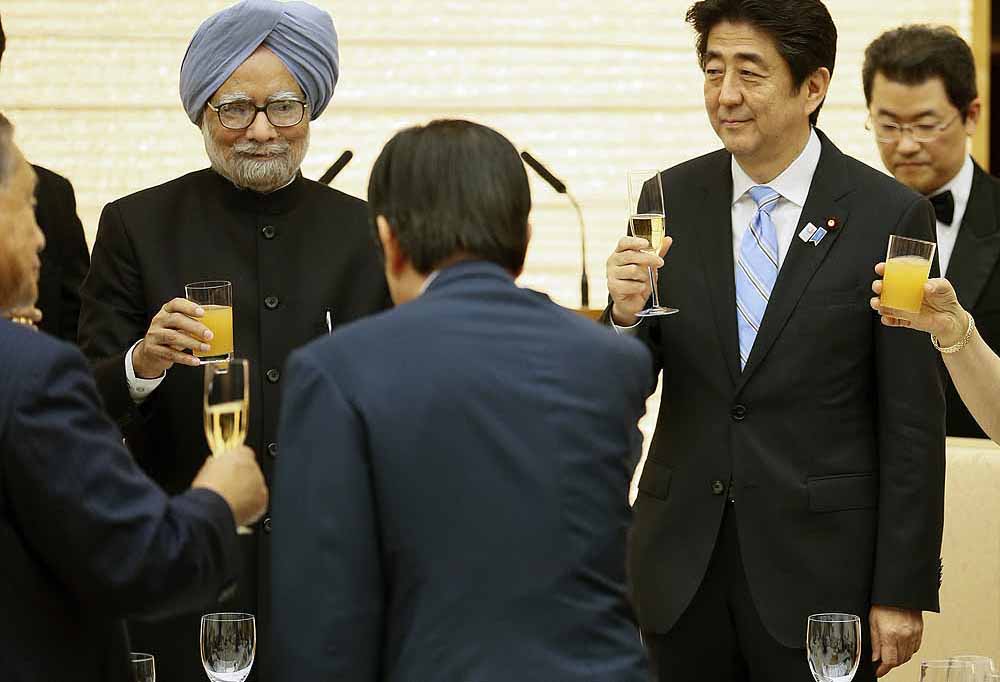 Most significantly, there is new seriousness in Indian foreign policy towards the larger Asian region— on full display during the Indian prime minister’s visit to Japan in late May. For far too long, India has been hesitant in engaging Japan for fear of upsetting China. New Delhi is slowly shedding this ambivalence, and Japanese Prime Minister Shinzo Abe has been one of the strongest votaries of a tighter Delhi-Tokyo embrace. Tokyo under Abe is making overtures to other likeminded countries such as the United States and Australia in pursuit of what he calls an “Asian Democratic Security Diamond.”

During his visit, Manmohan Singh announced that Japan is a “natural and indispensable partner” for cooperation in the Indo-Pacific and emphasized India and Japan’s “shared commitment to the ideals of democracy, peace and freedom,” underlining strong synergies between the two states “which need an open, rule-based international trading system to prosper.” Singh and Abe underscored their commitment to freedom of navigation and unimpeded commerce as well as agreeing to promote cooperation on maritime issues.

New Delhi and Tokyo not only agreed to institutionalize and increase frequency of joint naval exercises, but Japan also offered its advanced seaplane US-2 to India. A joint working group has been set up to decide terms of cooperation. This is the first instance of Tokyo's readiness to offer a dual-use technology to New Delhi, setting a new benchmark in the rapidly evolving bilateral ties. The Singh-Abe joint statement also directed officials of their countries to “accelerate” negotiations of an Agreement for Cooperation in the Peaceful Uses of Nuclear Energy. These talks underway since 2010 had been in the deep freeze since the Fukushima incident, but the new Japanese government is keen on nuclear power. Japan is no longer demanding that India sign the Nonproliferation Treaty as precondition for conclusion of this civil-nuclear energy pact.

India and Japan attach new importance to their bilateral ties as evident in the statements from the two prime ministers. “It is not only our spiritual and cultural affinities that bring us together, but also our shared commitment to democracy and international peace,” Singh suggested. “The success of our partnership is vital for the prosperity of our people and indispensable for a future of peace and stability in Asia and Pacific region.” Shinzo Abe reciprocated: “India from the west, Japan from the east, the confluence of the two most deep-rooted democracies is already one important part of international common good for the 21st century. I am of a belief that it is important that Japan and India should ensure that Asia remains in peace and prosperity.”

As Asian balance of power changes, new major power configurations are likely to emerge. China, Japan and India are the three most formidable regional players and how they manage their bilateral relations will have great bearing on the configuration of the Asian power balance. China’s aggressive behaviour is bringing India and Japan much closer than could have been envisioned just a few years back. Though Beijing is likely to view this as an attempt at containment, Delhi and Tokyo will argue that it’s merely a response to China’s provocations. Whatever happens, global politics will be shaped, to a considerable degree, by the push and pull of Asian geopolitics.