According to information, more security personnel were being brought in to bolster security and prevent any escalation of trouble in the state in the wake of Thursday's incident at Gorukhuti village under Sipajhar revenue circle of the district. 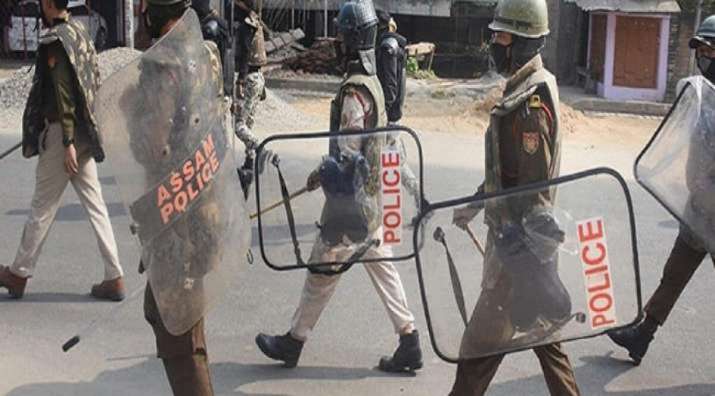 The death toll in Thursday's police firing in Darrang district of Assam during an eviction drive has climbed to three while stray incidents of stone pelting at vehicles and burning of tyres on roads to enforce a bandh in the district since Friday morning were reported.
On the other hand, 11 persons, including three policemen, are undergoing treatment for injuries suffered during the clashes, at the Guwahati Medical College Hospital.
Police on Friday also produced Bijoy Bania, an official photographer who was filmed assaulting a dead man, in a Guwahati court.
According to information, more security personnel were being brought in to bolster security and prevent any escalation of trouble in the state in the wake of Thursday's incident at Gorukhuti village under Sipajhar revenue circle of the district.
Several organisations led by the All Assam Minority Students' Union called a 12-hour district bandh from 5 am to protest against the police action. Leaders of the AAMSU warned that atrocities on the minorities will not be tolerated anymore.
On the other hand, a host of state Congress leaders led by president Bhupen Kumar Borah were prevented from visiting the place of occurrence. They later took out a march at Mangaldoi, the district headquarter town, condemning the BJP-led government.They sat in protest in front of the deputy commissioner's office asking that the ongoing eviction drive be stopped and a proper inquiry instituted into the incident.They also demanded action against the deputy commissioner and superintendent of police, who happens to a brother of chief minister Himanta Biswa Sarma.
Trouble broke out on Thursday after residents of the village, belonging to Bengali-speaking Muslim community and who are seen as "illegal immigrants" from Bangladesh, resisted an eviction drive by the district administration after initially agreeing to vacate the government land they were illegally occupying. Police fired tear gas shells, rubber bullets and also blanks to disperse the mob, but to no avail and soon came under attack. In the firing that followed two persons died while several others were injured.
What stood out amidst all this was the macabre sight of Bania pouncing on a man -- kicking, kneeing and boxing -- lying motionless on the ground and presumably dead after being shot at and rained with blows from the baton by policemen. He was accompanying the eviction team to record the proceedings. A couple of security personnel were also seen hitting the man with the baton and rifle butt. As the video went viral, police arrested him late in the evening.
According to local residents, the man had charged at the policemen after his daughter was allegedly hit by them leaving her with a fractured arm. He was then shot and assaulted.
The government had carried out an eviction drive in the same revenue circle on Monday rendering 800 families comprising about 5000 people homeless. After retaining power for the second consecutive term in the state in May, the BJP government declared it would free man£ of encroachers and hand it over to indigenous people. The government also plans to use the area in Sipajhar for community farming.