Taking the ruling BJP on, Gandhi said the party sought to divert people's attention from issues such as unemployment and farm distress with "fancy events". 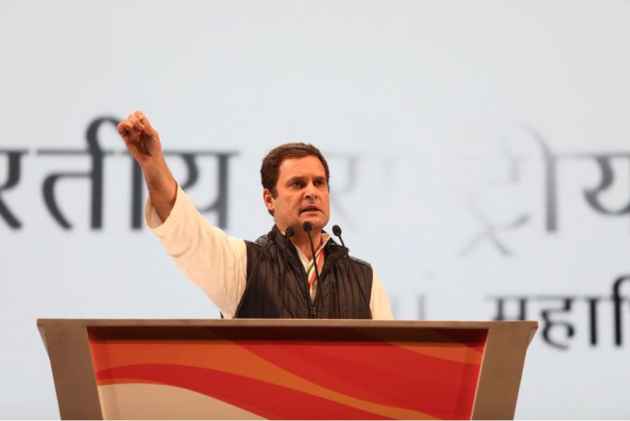 Recalling the two warring sides of the epic Mahabharat, Congress president Rahul Gandhi today said the BJP, like the Kauravas, fought for power, while his party, on the lines of the Pandavas, battled for truth.

Taking the ruling BJP on, Gandhi said the party sought to divert people's attention from issues such as unemployment and farm distress with "fancy events".

Congress will take the country forward, but we are humans, we make mistakes. Modi ji thinks he is not human but an incarnation of God: Rahul Gandhi #CongressPlenarySession pic.twitter.com/nvArFl9Gpt

"Instead of acknowledging the challenges facing the nation, Prime Minister Narendra Modi diverts our attention from our problems. We are being told that our problems only exist in our imagination," he said.

The BJP-RSS's goal was power, Gandhi stressed at the Congress party's plenary session in New Delhi.

"Like the Kauravas, the BJP and RSS fight for power. Like the Pandavas, the Congress fights for truth," he said.

Gandhi held that his party spoke on behalf of the country.

The Congress leader added that the corrupt and powerful today "control conversation" in the country and the "name Modi symbolises the collusion between crony capitalists and the prime minister".

Gandhi voiced the hope that India would in the next decade play an all-important role on the global stage.

"There are two visions in the world -- of US and China. In 10 years, I want to see India's vision there," he said.

In his address, he assured party workers that he would break walls between them and leaders and vowed to fill the Congress stage with "talented youngsters".

He stressed the need for discipline, and said, "Let us put all differences aside and work together to ensure victory for the party".