Sharing a table with former presidents Pranab Mukherjee and Pratibha Patil, Gandhi then turned to Yechury asking him to put out his fitness video as a challenge to Modi's. 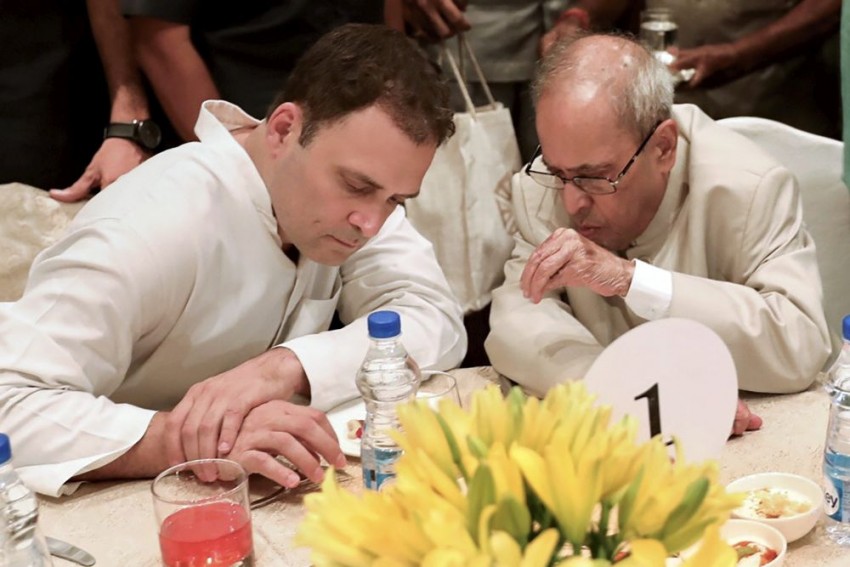 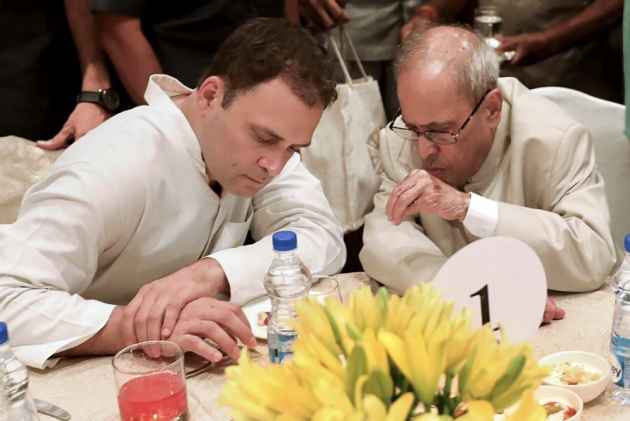 "Did you see the PM's fitness video? It is ridiculous... I mean... It is bizarre... This is bankruptcy," he said as he poked fun at the video put out by the prime minister.

Sharing a table with former presidents Pranab Mukherjee and Pratibha Patil, Gandhi then turned to Yechury asking him to put out his fitness video as a challenge to Modi's.

Days after a row erupted over his address at the RSS headquarters, former president Pranab Mukherjee on Wednesday broke bread with Rahul Gandhi at an Iftar party hosted by the Congress chief here.

While top opposition leaders were conspicuous by their absence, middle-rung leaders of many parties were at the Iftar hosted at a local luxury hotel. No senior leader of Samajwadi Party attended it.

This is the first Iftar hosted by Gandhi as Congress president.

"Good food, friendly faces and great conversation make for a memorable Iftar! We were honoured to have two former Presidents, Pranab Da and Smt Pratibha Patil ji join us, along with leaders from different political parties, the media, diplomats and many old and new friends," Gandhi said on Twitter after the Iftar.

Mukherjee was seen conversing with Gandhi and exchanging pleasantries with him and several other senior Congress leaders.

There was considerable disquiet in the Congress after Mukherjee accepted the invitation of the RSS to address its workers at its headquarters in Nagpur.

After much consternation, the party however, later complimented him for his speech for showing the mirror of truth that carried lessons on pluralism and secularism to the Sangh.

Gandhi came along with Mukherjee and while the former president left after sometime, the Congress chief offered to drop him back but Mukherjee politely refused.

Earlier, leaders of some opposition parties met at a different location to discuss possibilities of a larger alliance.

Kanimozhi later said, "Everyone wants alliances but today's meeting was a courtesy meeting."

Also present at the Iftar were a large gathering of diplomats, including the Ambassador of Russia to India.

UPA chairperson Sonia Gandhi was not present as she is currently abroad on a medical check up.

AAP Rally Against L-G A Throwback To 2011 And IAC