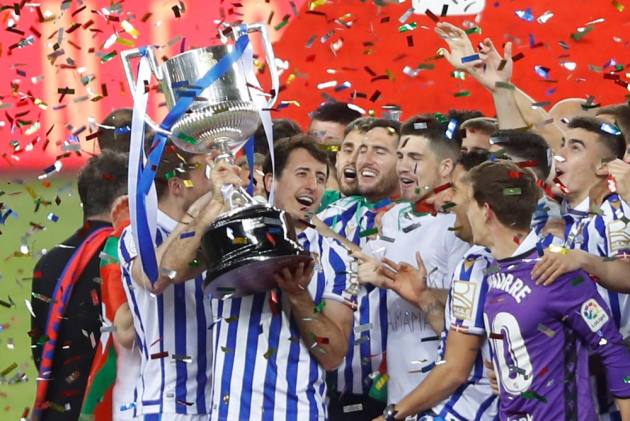 Real Sociedad have won their first Copa del Rey since 1987 after Mikel Oyarzabal's second-half penalty secured a 1-0 victory over Athletic Bilbao in what was the first ever final between the two great rivals in their current guises. (More Football News)

Played 350 days later than initially scheduled due to the coronavirus pandemic, La Cartuja in Seville played host to one of the most significant finals in the competition's history and La Real came out on top in the long-awaited encounter.

In what was the first all-Basque Copa del Rey showpiece since 1927, it was perhaps fitting that someone who has played for both teams was central to the match's major moment of contention, as Inigo Martinez was sent off for the concession of a penalty, only to be hauled back on following a VAR check.

While Athletic desperately sought a late equaliser, Marcelino Garcia Toral's men lacked the invention to force extra-time, but they will have another bite at the cherry on April 16 when they face Barcelona in the 2020-21 final.

Establishing any form of control proved difficult for either side in a frenetic opening half that was exacerbated by the downpour in Seville.

It was not until the 33rd minute that either goalkeeper was forced into necessary action, as Athletic centre-back Martinez let fly from distance and saw Alex Remiro tip over in spectacular fashion – both players featuring against the teams whose academies they graduated from.

Athletic survived a scare at the other end soon after, with Yeray Alvarez managing to cut out Andoni Gorosabel's right-wing cross as Alexander Isak waited for a simple finish.

6 - Athletic Club (three) & Real Sociedad (three) have made six total shots combined at the half time, the lowest tally in a #Copa final’s first half since at least 2010/11 season. Containment#Athletic #RealSociedad pic.twitter.com/uaaovK2iu7

Martinez avoided conceding a penalty soon after the restart, with his handball deemed to be just outside the 18-yard box.

He did not get so lucky just past the hour, though, when Martinez clumsily tripped Portu as he looked to latch on to a throughball.

The red card flashed in his direction was soon overturned on review, but Oyarzabal was not as forgiving, lashing an emphatic penalty past the helpless Unai Simon.

There proved to be no way back for an Athletic side, who were generally toothless throughout.

What does it mean? The long wait ends

Thirty-four years. Since they last won the Copa in 1987, there have been some bleak times for La Real – their sole trophy in that period was the 2009-10 Segunda title. That is hardly the sort of silverware a club can laud over others.

But this is something entirely different: a major trophy that has been won by denying their great local rivals, who themselves have not won the Copa since 1984 – though they have won the Supercoppa twice.

The reactions of the Athletic players at full-time were those of individuals coming to terms with what an opportunity they had passed up here, and on the evidence of their performance, going one better and beating Barcelona in a couple of weeks is not likely.

While he may not have the elegance of David Silva, the delicate feet of Isak or the all-round excellence of Oyarzabal, Portu is vital to this La Real side. His tirelessness on the right helped keep the usually forward-thinking Yuri Berchiche in check, and it was he who won the penalty from Martinez.

La Real's captain will get the glory, but this win would not have happened without Portu.

A day of misery for Martinez

A Copa final against the club he used to play for – his first Copa final since crossing the divide in 2018, Martinez will have been desperate for success here. Let us not forget, La Real did their best to write him out of their history when encouraging fans to exchange jerseys donning his name after making the switch to San Mames.

But unfortunately for him, it was not to be. After being arguably fortunate to not concede one penalty, he could not help himself soon after when tripping Portu. There was never the opportunity to make amends, either.

- Real Sociedad have won their sixth title ever: two LaLiga (1981 and 1982), the Supercopa a Espana in 1982 and three Copas: 1909 called as Club Ciclista San Sebastian vs Espanyol (not recognized by RFEF), in 1987 versus Barcelona and in 2021 vs Athletic Club.
- La Real have become the first Spanish team to have won a Copa final in a 1-0 with the goal coming from a penalty. Indeed, it was their only shot on target of the game.
- Athletic have equalled Real Madrid (from 1918 to 1933) as the team to lose more consecutive Copa del Rey finals in competition history (five, from 1985 to 2021).
- Mikel Oyarzabal has scored 89.5 per cent of his penalties taken for Real Sociedad in all comps (17 out of 19, after missing the previous two before this). Only Sergio Ramos (18) among LaLiga players has scored more penalty goals than him since the beginning of the 2018-19 season in all comps (17, same as Lionel Messi).

These two do it all again on Wednesday as Athletic make the short trip to San Sebastian for a league encounter, with revenge firmly on the agenda. Marcelino's men then face Deportivo Alaves next weekend before their second Copa del Rey final in two weeks on April 16, when they will meet Barcelona in the showpiece of the 2020-21 edition.