‘Atrangi Re’ Movie Review: Dhanush Steals The Show In This Twisted Love Triangle

Director Aanand L Rai concocts a very unique love triangle. The twist is the love story is what makes it worth a watch. Otherwise is it worth you time? Read on the full review to find out. 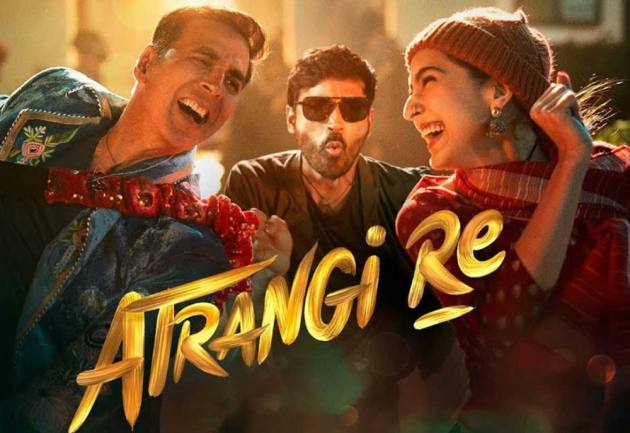 What’s It About:
Rinku (Sara Ali Khan), Vishu (Dhanush), and Sajjad (Akshay Kumar) play the main characters. Rinku remains in Siwan and falls in love with Sajjad. She has attempted to flee with him several times but has always been apprehended by her family. Her family chooses to marry her off to a complete stranger who lives in another state. Vishu is kidnapped, and the jabariya shaadi (forceful wedding) takes place. However, both Vishu and Rinku are dissatisfied with the wedding because the former has a girlfriend and the latter adores Sajjad. They both decide to split up after they are in Delhi and Sajjad returns from Africa. But fate has something more in store for Rinku and Vishu. Will Rinku be able to break herself up from Vishu and become Sajjad’s? Will Vishu be able to let go of Rinku? Will Sajjad be able to win Rinku’s love? Well, you’ll have to watch ‘Atrangi Re’ for the same.

What’s Hot:
Dhanush steals the show in pretty much every frame. Whether it’s his drunken streak or his jilted lover boy act, he has aced every shot. Sara Ali Khan is slightly boisterous and over the top when it comes to her Bihari accent and hot-headed mannerisms.

AR Rahman is the king when it comes to music and he proves that once again in this film. The background score haunts you and makes you feel like you’re standing right beside the characters in every moment.

The way the topic of mental health has been explored is unique. While we have seen it before in films like ‘Sadma’, but the way filmmaker Aanand L Rai and writer Himanshu Sharma decide to portray it, is quite different. It’s unpredictable and comes in a way that draws you into the story just as it was starting to get boring.

What’s Not:
Akshay Kumar, as a magician, could have done a lot more with the character. He is just about there, and there is actually no character arc that grows diabolically through the screenplay.

The screenplay by Himanshu Sharma is incoherent. Also, we have seen a lot better direction from Aanand L Rai in films like ‘Tanu Weds Manu’ and ‘Raanjhanaa’. The duo is able to create that world for this twisted love triangle but somehow is unable to keep the believability of the same till the climax. The execution is sort of messed up. The film got a bit boring in the middle, and it was only when the identity of Akshay Kumar gets revealed that a bit of energy gets pumped into the script.

The major letdown of the film is when in the middle, Dhanush and his friend talk about who Akshay Kumar’s character actually is. They should have revealed the identity of who he actually is at the very end, which would have made the climax come out even better. A fine example of the same was how Akshay Kumar’s real identity was revealed at the very end of the Salman Khan-Priyanka Chopra starrer ‘Mujhse Shaadi Karoge’.

Lastly, it’s understandable that the topic of mental health has been discussed in a light-hearted way, but the makers could have done it with a bit more seriousness. It would have helped the audience watching it understand how a shocking traumatic incident can affect a person’s life or, in this case, a little girl’s life.

Verdict:
It’s a different approach to a twisted love triangle. It does get boring in the middle, but it’s not one that’s predictable. Dhanush is mind-blowing in every scene, and there is hardly anyone in Indian films who could emote as well as he does. Could it have been made better? Yes, definitely. However, it’s indeed a ONE-TIME WATCH. I am going with 2.5 stars.