While India has time and again appealed for rapprochement between the democratic forces and the military, it has continued to engage with the junta in Myanmar. 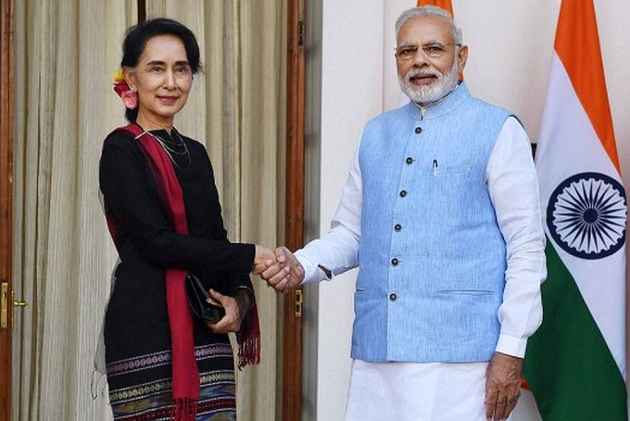 Cocking a snook at world opinion, a court in Myanmar has sentenced Nobel laureate Aung San Suu Kyi to four years imprisonment in what her supporters and most of the international community regards as trumped-up charges. No court in the country would have dared to send the country’s most famous face to jail without the backing of the ruling military junta.

Myanmar has been on the boil since February 1, when the army arrested Suu Kyi and other leaders of the National League for Democracy and took over the reins of government. February 1 was the day when the new Parliament session was to convened after Aung San Suu Kyi’s party won the elections and trounced the military-backed parties. According to the Myanmar Constitution, 25 per cent of the seats are reserved for the armed forces. Unhappy over the victory of the NLD, the army staged a coup and locked opposition leaders in jails across the country. But ordinary citizens took to the streets and defied the army, many protesters were killed by soldiers. The international community condemned the coup and asked for immediate restoration of democracy. So far the army has refused to relent and continues to keep a tight grip on the country. ASEAN leaders are nudging the generals to release political leaders and begin negotiations, but with no effect.

The army’s defiance of international opinion was evident with the sentencing of Suu Kyi on Monday. There are however indications that the 76-year old leader of the National League for Democracy will be given a reduced sentence for two years. This was reported by the state-controlled television channel, which said she had been granted a partial pardon.

India reacted to the latest development in Myanmar on Tuesday, possibly because the foreign ministry was caught up yesterday with the India-Russia summit. New Delhi is in a fix. As a democratic country, a military coup in its immediate neighbourhood has to be condemned in the strongest terms. Yet its security interests and the fact that Myanmar borders its sensitive northeastern region home to several insurgent groups, call for keeping a line to the military rulers intact.

India also shares a 1,643-km unfenced border with Myanmar—of this 520 km is adjoining Arunachal, 215-Km with Nagaland, 398-km with Manipur, and 510-km of the border is across Mizoram. The corresponding areas in Myanmar are Kachin, Sagaing, and Chin. Northeastern insurgent groups have camps across the border in Myanmar and can operate with impunity from there. However, in recent years the Myanmar army had cooperated with Indian authorities and even allowed Indian operations across the border on their soil.

So while India has time and again appealed for rapprochement between the democratic forces and the military, it has continued to engage with the junta. In earlier times, India welcomed refugees fleeing from the army crackdown on its own people. But this time around, strict instructions were sent out to the Assam Rifles and Border Security Force to send back refugees hoping for sanctuary in the border states of the northeast.

This morning, foreign office spokesman Arindam Bagchi released a statement. "We are disturbed at the recent verdicts. As a neighbouring democracy, India has been consistently supportive of the democratic transition in Myanmar. We believe that the rule of law and the democratic process must be upheld. Any development that undermines these processes and accentuates differences is a matter of deep concern. It is our sincere hope that keeping their nation’s future in mind, efforts would be made by all sides to advance the path of dialogue.”

While Western nations have slapped sanctions on Myanmar, India does not believe in sanctions and says that often it hurts the very people the West wants to help. Moreover, despite the no refugee diktat, the Mizoram chief minister, an NDA ally, had gone ahead and given shelter to those fleeing army repression. However, because the people living across the border in Myanmar are from the same tribal group and there are family connections, the chief minister could not but allow refugees into the state.

In earlier times the Suu Kyi verdict could have led to protests in several Indian cities. This happened in 1989 when the military placed her under house arrest. This time around there is hardly a whimper over her unfair indictment.