After the batting exploits of Clarke (151) and Gilchrist (104) power the world champions to 474, the seamers carry on the good work as McGrath (3-37) and Kasprowicz (2-23) rip through the famed Indian line-up to leave the hosts tottering at 150-6, st India today succumbed meekly to leave Australia in a commanding position on the second day of the first Test which was marked by an outstanding 151 by debutant Michael Clarke and another century by stand-in skipper Adam Gilchrist.

The hosts were tottering at 150 for 6 at close after allowing Australia to rattle up a mammoth 474 and were still short by 125 runs to avoid the follow on.

India's much-touted batting line-up crumbled against disciplined bowling by speedsters Glenn McGrath (3/37) and Michael Kasprowicz (2/23) who took centrestage after the batting heroics of Clarke and Gilchrist (104).

The Indian innings suffered early blows with both Aakash Chopra and Rahul Dravid falling without opening their account.

Virender Sehwag (39) and skipper Saurav Ganguly (45) seemed set for bigger knocks as they rebuilt the innings with a 83-run partnership for the third wicket. But both were consumed by the reverse swing of Kasprowicz.

The highlight of the evening session was the battle between V.V.S. Laxman and Shane Warne.

The Indian had the psychological advantage from the domination he had over his rival last time they met but the Australian leg-spinner showed more patience and understanding of the conditions than he did before to have the last laugh.

After being driven and tonked, Warne produced a huge leg break that fizzed past Laxman's bat to knock the off bail.

More than the delivery itself, it was the entire spell in which Warne worked on the batsman and made him play the way he wanted that showed him why he is a world record breaking bowler.

The Indians' problems would be doubled keeping in mind the condition of the track. The ball got quickly scrubbed up and the bounce was low, leaving the batsmen in trouble often.

After the Kolkata Test in the 2001 series, the Australians had been wary of asking Indians to follow-on. But this time around, Gilchrist might very well go in for the kill.

Earlier, Australia were all out for 474 in their first innings after Michael Clarke became the 17th Australian to score a century on debut. 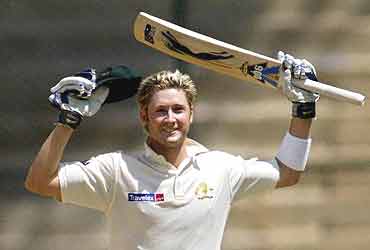 Clarke's 151 was the sixth highest by an Australian playing in his first Test. It was also the first instance of an Australian scoring a hundred on debut against India.

The 23-year-old New South Wales right hander faced 248 balls and struck 18 fours and four sixes in his more than six hours stay at the crease.

Gilchrist was the other centurion of the Australian innings, with 104 off 109 balls with 13 fours and three sixes.

The 167-run partnership between Gilchrist and Clarke was Australia's highest for the sixth wicket.

Harbhajan Singh claimed his 12th five wicket haul in an innings with five for 146 while Anil Kumble failed to take any wicket today and ended up with three for 157.

Resuming at 316 for five, Australia sent the hosts on a leather hunt, amassing 117 runs in the morning session alone to consolidate their strong position.

The Indians almost went without a wicket until Gilchrist fell shortly before the lunch break.

Clarke repaid the faith his team management had shown in him with an enterprising knock.

Clarke, 76 overnight, spent nearly 45 minutes in the nervous nineties. He survived a close leg before decision off Kumble when on 92 but then struck the bowler to the long-off fence to move to 96. Few moments later, he turned Irfan Pathan to mid-wicket and scrambled for two runs for his maiden Test hundred.

Clarke's parents in the gallery were overwhelmed by tears of joy as their son kissed the Baggy Green.

The youngster needed 170 balls for his century that contained 14 fours and two sixes.

After Clarke's century, Gilchrist took the attack to the Indians. The Aussie captain was severe on Kumble whom he clouted for two huge sixes.

After their exploits with the bat, it was the turn of the Aussies to dominate with the ball as well.

Thirty-four year-old McGrath proved he had enough fire in him as he dismissed Chopra and Dravid in the space of six balls. He rapped the opening batsman in the very first over of the Indian innings and then bowled the vice-captain in his next over.

Sehwag, who had scored a century in a warm-up match at the same venue a week ago, middled the ball well. He was less troubled by either McGrath or Gillespie, and was comfortable against Kasprowicz as well.

He handled the reverse swing of Kasprowicz with ease, driving him on the up through the off repeatedly. But he was the first victim of the double paced nature of the wicket, as he went for a flick and realised late that the ball stopped short on him, offering a catch to Justin Langer at mid-wicket.

Kasprowicz then produced an unplayable delivery to dismiss Ganguly, as the ball pitched on the leg stump and moved away, kissing the Indian captain's bat on its way to the wicketkeeper.

Yuvraj Singh (5) was woefully out of form and lasted only 22 balls before snicking McGrath to Gilchrist.

The 'Pigeon' would have had another wicket if only his leg before shout against Parthiv Patel had gone in his favour.

The return of Warne for his final spell then paved the way for an exciting close.

The tricks that he had tried against Ganguly and Sehwag made little impact on Laxman who from the moment he clipped him to square leg from outside off looked in sublime touch.

The Aussies were once again gripped by the fear of Laxman saving his best for them.

But for Warne, probably on his last tour of the sub-continent, it was personal pride at stake. And his studied approach to the crease and the spot on line and length resembled the 'Sheikh of Tweak' of the early days.

Warne bowled his leg breaks faster and concentrated on one spot. He packed the leg side with three men inside the circle besides the forward short-leg.

But Laxman kept picking him from the good length spot, and when the bowler went around the stumps, he went on the back foot and whipped him through mid-wicket.

Against the run of play, then came the dismissal. Warne switched back to over the wicket, and as Laxman planted his front foot, the ball pitched just outside the leg and spun past the bat that was still coming down to hit the off peg.