In the book, the name of the protagonist is Nirav Choksi. Interestingly, the prime accused in the PNB fraud case are Nirav Modi, the billionaire jewellery designer and his maternal uncle Mehul Choksi, who is also the business partner of the former. 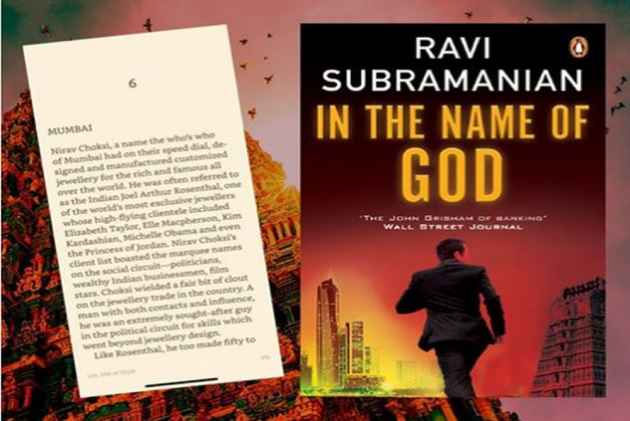 While the entire nation is in a state of shock over a whopping Rs 11,400 crore fraud at one of the branches of country’s 2nd biggest public sector bank—Punjab National Bank, an uncanny resemblance of the fraudsters with the characters of a book, “In The Name Of God”, written by Ravi Subramanian much before the fraud came to light has left many perplexed. While some appreciated Subramanian’s “foresight” and even went on to compare him with the French astrologer and physician, Nostradamus, the Mumbai-based writer, in an exclusive interview to Outlook, revealed how this happened.

1)  Is it a coincidence that your characters in the book 'In the name of god' have a strong resemblance to the current scenario involving PNB, Nirav Modi, and Mehul Choksi?

Oh it was completely coincidental. Ever heard of a name creating a scandal. This is the ideal case of a frenzy erupting over a name. Strangely people who have not read the book are talking about the book just because the name of a character in IN THE NAME OF GOD is Nirav Choksi . He is a jeweller, rich, powerful and well connected. A rich jeweller was the need of the story.  As far as other characteristic traits like connect with politicians and influential people are concerned, well, that is par for the course. In India, all wealthy people (irrespective of line of business) have connect and are influential. And by the way, the book does not have any mention of anything even remotely like the PNB scam.

2)     Why did you choose to name the protagonist as Nirav Choksi?

When authors like me name a character in their book, what we normally do is look around for names which fit the personality of a character. The character in my book you are referring to, is a very popular jeweller, who dominates his trade. Had to be a Gujarati, because most people in this trade come from that part of the country. So I settled on a name, Nirav Choksi. The name is flamboyant, stylish, sounds powerful and is easy for the reader to remember.

3)There are certain places mentioned in the story like Antwerp. Nirav Modi’s father was also a diamond trader, who had migrated to Antwerp. Any particular reason for not choosing any other place?

80% of the worlds diamond trade passes through Antwerp. Every rich diamond merchant has offices in Antwerp. A story which has a diamond merchant cannot, in the normal course, not connect to Antwerp and Belgium. It is like saying you are writing a cricket magnum opus and not touching Lords.

3) Why all your stories are related to banks?

I have worked in the banking industry for over two decades and that industry fascinates me. In fact, it often intrigues me that people have not written about the industry at all, despite the fact that the industry deals with money, frauds, crime, investigation, relationships, people, customers, aspiration, greed etc etc. So I started writing in this space. Over the years this has become a space which I have come around to own. No one else writes in this space. Wish there were more writers who would write on this industry.

5) What is your take on the fraudulent deal that took place in the 2nd biggest public sector bank?

This scam is a result of human tendency to commit a fraud. Greed coupled with disparity of income in our country is a deadly concoction. I say this because compliance and controls are weak the world over. They are to a large extent dependent on people running it. And remember A process is only as good as the people running it, so unless you choose your people carefully, you are exposing yourself to frauds.  Also such frauds like the one in PNB, cannot be done by juniors on their own. Surely there would be seniors involved. Instructions would have come from the seniors. Unfortunately, the execution was done by the junior clerks who ultimately have their finger prints all over the scam and have got caught. I just wish the investigations bring the real people responsible to book.

Sadly this has deteriorated to a UPA Vs NDA battle...which, honestly, it is not. This scam would have happened irrespective of which government is in power. A government cannot do anything if people down the line are corrupt.

Also this raises a serious question on bank recapitalisation. I have always held that recapitalisation will not serve the purpose if you don’t fix the inherent issues in the banking system – talent,  productivity, integrity, compliance, customer service, accountability etc are issues which need to be fixed before the recapitalisation happens. We need a permanent solution for the bank issues – recapitalisation is like fixing a leaking roof for one monsoon.

6) Are you currently working/planning to publish your next book soon?

Yes. I am working on my next book which releases later this year.