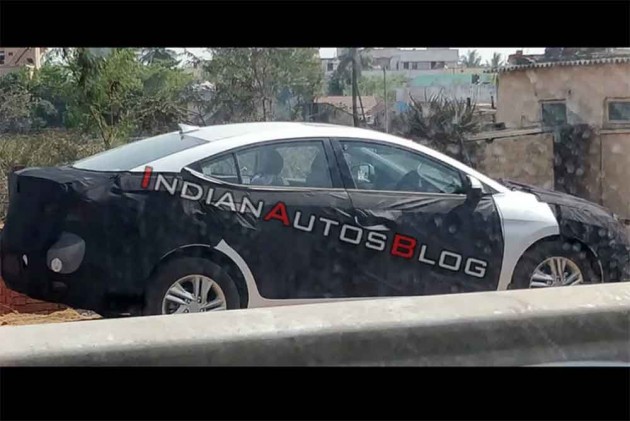 After launching the Elantra facelift in USA in 2018, Hyundai is planning to bring the facelifted sedan to India later this year. The upcoming sedan has been spotted testing in India recently suggesting its imminent arrival. The 2019 Elantra looks entirely different from the pre-facelift model, which is on sale in India currently. In fact, the changes are such that the 2019 Elantra looks more like a new-gen model rather than a midlife facelift. It gets a new front fascia featuring new triangular quad-LED projector headlamps with DRLs that flow into the latest iteration of Hyundai’s cascading grille. The front bumper is also updated and features triangular fog lamps. The rear is completely new with a new boot lid, tail lamps and bumper. The number plate housing on the boot lid has been replaced by a big ‘Elantra’ moniker. It now sits on the rear bumper which also houses reverse lights. The new tail lamps feature striking geometric LED detailing that complement the DRLs up front. However, in profile, it still looks similar to the outgoing model. The doors and coupe-like silhouette reminds us of the pre-facelift Elantra. The new Elantra is available with wheel sizes ranging from 15-18 inches, but in India, it is likely to get 16-inch wheels, like the current Elantra. That said, Hyundai might offer 17-inch wheels, albeit on the top-spec Elantra in India. On the inside, not much has changed in the Elantra facelift. The basic cabin layout is similar to that of the outgoing model, however, the 2019 Elantra gets updated AC vents, new steering wheel, instrument cluster and central console. The current Elantra is one of the best equipped cars in its class and the facelift won’t be any different. It will continue to be equipped with features such as six airbags, ABS with EBD, electronic stability control, hill launch assist, electric sunroof, wireless mobile charging, push-button start, electrically adjustable driver seat, handsfree smart trunk and an 8-inch touchscreen infotainment system with Apple CarPlay and Android Auto.

In the global market, the new Elantra also comes with some active safety features like forward collision-avoidance assist, lane keep assist, driver attention assist and rear cross-traffic collision warning as a part of Hyundai’s SmartSense package. However, these features are not expected to make their way to the India-spec Elantra facelift. Transmission options are expected to remain unchanged with both the engines getting the option of a 6-speed MT as well as a 6-speed AT. Hyundai might introduce a dual-clutch transmission to the mix as well, since the upcoming QXi SUV is expected to get the same too. When launched later this year, the new Elantra is expected to cost roughly the same as the current Elantra, which is priced from Rs 13.81 lakh to Rs 20.04 lakh (ex-showroom Delhi). It will rival the likes of the Skoda Octavia, Toyota Corolla Altis and the recently launched Honda Civic.