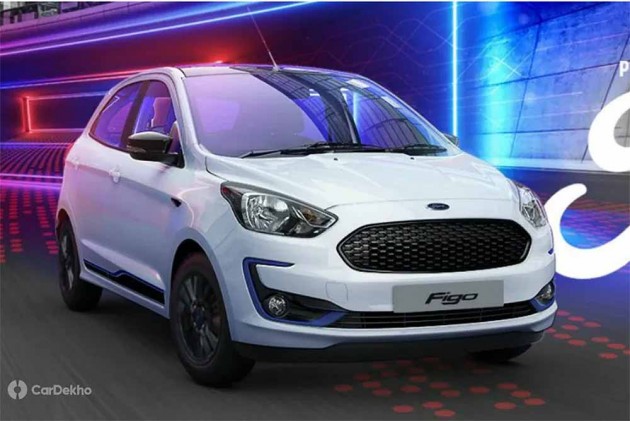 Ford has teased the 2019 Figo facelift which is scheduled to launch on 15 March, 2019. These teaser images give us an idea of what we can expect from the Figo hatchback. The second-gen Figo was first launched here in 2015. The facelift comes 4 years after that, but the new styling was introduced on the Freestyle cross-hatch in 2018. From the teased images, we can now confirm that the updated Figo will be available with a sportier dual-tone option with blue accents and decals, bigger 15-inch black alloys and the gloss black grille. These blacked-out elements were exclusive to the Sports Edition variant of the outgoing Figo, which was offered with both petrol and diesel engines. In the updated Figo, this variant will be the Blue Edition. From the red Figo teased, we can identify the smaller 14-inch alloys and chrome inserts instead of blue. As spotted before, some of the key cosmetic updates to the 2019 Figo are the new headlamps, revised bumpers and new front grille. In terms of feature updates, expect the top variants to be equipped with some new tech such as the 6.5-inch Ford SYNC3 touchscreen infotainment system with Android Auto and Apple CarPlay compatibility.

The biggest change for the 2019 Figo will perhaps be under the bonnet. It is expected to house the more powerful 1.2-litre, 3-cylinder petrol engine mated to a 5-speed manual transmission. The petrol-auto drivetrain is likely to be the 1.5-litre Dragon series petrol engine with a 6-speed torque convertor. This will replace the previous 1.5-litre petrol engine and DCT combination. Meanwhile, the same 1.5-litre diesel engine will be on offer with a new 5-speed manual transmission but is expected to be carried forward in the same state of tune.

Ford is likely to price the 2019 Figo in a price range of around Rs 5 lakh to Rs 7.6 lakh (ex-showroom). Once launched, it will renew its rivalry with the likes of the Maruti Swift and Hyundai Grand i10.