A slicker design, updated engine options and a host of new safety features separate the ninth and tenth generation Honda Accord 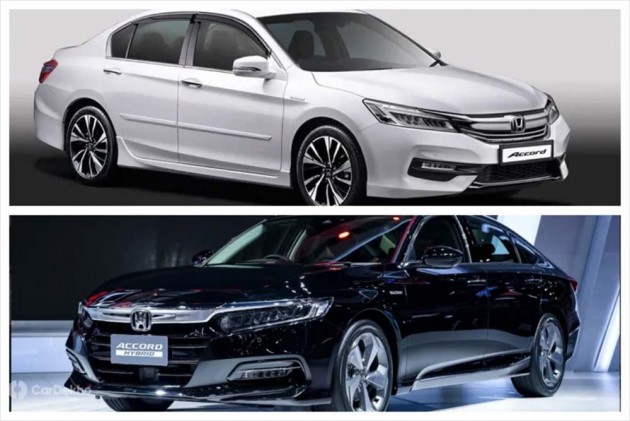 The design of the new Accord will remind you of the latest Civic.

Honda recently revealed the tenth-generation Accord for ASEAN region. The carmaker is yet to confirm its launch in India, but if it comes, it is likely to be this model. The tenth-gen Accord features a host of changes over the ninth generation model that was launched in India in 2016. We expect the new model to come to India later this year. So here’s a comparison of the current-gen Accord and its successor.

The Accord has always been a low-slung sedan and that has not changed with the new generation model. However, the silhouette of the car has been redesigned and it now looks more like a coupe (it will remind you of the new Civic) than before. The older car looked more like a traditional sedan where the boot was clearly visible as a third box. The new Accord’s boot seamlessly merges with the sloping roofline.

The Accord has grown shorter in length by 39mm but the wheelbase has increased by 54mm, which suggests that the cabin might be roomier than before. The width of the car has increased by 13mm which might result in more shoulder room as well. The overall height has decreased and that can be attributed towards the sloping roofline design.

The 2.0-litre petrol hybrid engine currently offered with the Accord Hybrid in India is also offered on the new tenth-generation Accord in Thailand. When the new Accord comes to India, Honda is likely to offer it only with the 2.0-litre petrol hybrid engine. Honda is also offering a smaller turbocharged engine in Thailand, but we don’t expect that one to make it to India.

The ninth-generation India-spec Honda Accord is equipped with a 7-inch touchscreen infotainment system that supports Apple CarPlay and Android Auto. It also gets sat-nav and comes with an in-built Wi-Fi receiver.

The new tenth-generation Accord gets a free-standing 8-inch infotainment system that supports Apple CarPlay. It also gets a HUD (Head Up Display) for the driver along with a 7-inch TFT screen that acts as the instrument cluster. The Accord also gets voice recognition, wireless charging for your smartphone and a remote engine start feature. Both the current and next-gen Accord feature a sunroof.

The tenth-generation Honda Accord takes safety to the next level with Honda Sensing, a system that comprises of multiple features like Collision Mitigation Braking System (CMBS), Adaptive Cruise Control with Low-Speed Follow (ACC with LSF), Lane Keeping Assist System (LKAS), Road Departure Mitigation System with Lane Departure Warning (RDM with LDW) and Auto High-Beam (AHB) which help in avoiding any mishap on the road. It also gets a Cross Traffic Monitor (CTM) that warns the driver of other vehicles that are present on the left or right of the Accord’s rear end. A multi-view camera system also shows images from all angles, including a birds eye view using four different cameras. Parking is also made easier with Honda Smart Parking Assist System which controls the steering wheel with the driver only required to move forward or in reverse when parking. This also works for parallel parking.

The tenth-generation Accord is a perfect successor to the current-gen Accord, at least on paper,  and you can see improvements made where required. The design is a lot more contemporary than before and the feature list has also been updated. The ninth-gen Accord is priced in India at over Rs 43 lakh (ex-showroom Delhi) and the new model is likely to be priced in the same range.