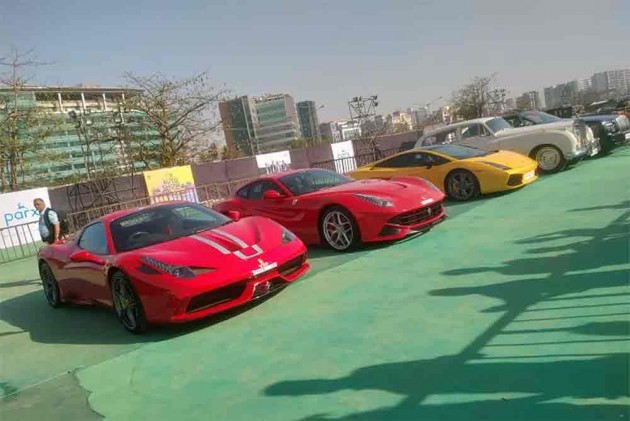 One of the most difficult tasks on a chilly wintry Sunday morning is to get yourself out of bed. I will admit I am not a morning person, more so on a Sunday. However, this Sunday was different -- I was up before 6am and there wasn’t any of the de facto grumpiness that’s usually associated with waking up early. And there was a good reason for this as I was on my way to attend the 2019 Parx Auto Show, the biggest gathering of vintage cars and bikes along with modern supercars and superbikes the country had ever witnessed. The Parx Supercar Show was started in 2008 and is among the most popular automotive events in Mumbai, making a comeback after a hiatus of some years. This year’s show also coincided with the Western India Automobile Association’s (WIAA) 100th anniversary and instead of being a one-day event, it was held over three days from February 8-10, with the cars and bikes being displayed at the MMRDA grounds in BKC. While the organisers claimed that the event would witness a total of 400 vehicles (100 supercars, 100 superbikes, 100 vintage cars and 100 vintage bikes), the real number actually turned out to be half of this, which still isn’t a bad thing. The showstoppers were the hypercar duo of the Ferrari LaFerrari and the McLaren Senna from industrialist Gautam Singhania’s international collection. However, for me, the best of the show were the Lamborghini Countach and the achingly gorgeous and super rare Porsche RSR with its ducktail wing, underneath which sits an air-cooled flat-six motor. As if that wasn’t enough, the owner of the Porsche RSR also had brought down the 964 Targa and the 993 Carrera 4S from the Gulf, which would have overwhelmed a Porsche fan for sure. Other notable supercars included a Ferrari F12 Berlinetta, Lamborghini Aventador SV, Porsche 911 GT3 RS, Ferrari 458 Speciale Aperta, Lamborghini Gallardo SE, Ferrari 599 GTB, Jaguar XKR-S, and a Lamborghini Gallardo LP-570 Superleggera. Talking about vintage cars, there were a selection of some delightful looking Rolls-Royces, Bentleys, Packards, Chevrolets etc. However, the highlights were the Benz Patent Motorwagen replica, an 1896 Ford Model A and a 1903 Humber Humberette. While there were many modern superbikes on display, they paled in terms of sheer beauty in comparison to vintage European motorcycles and scooters. On display were gorgeous creations from BMW, BSA, Norton, Triumph, Lambretta and Vespa. The rally was flagged off from BKC and ended at Ballard Pier in South Mumbai. It was a beautiful spectacle to see modern supercars and vintage cars roll together with the contemporary BKC architecture adding to the visual drama. The howl of the V12 motors, the roar of V8 engines and the quick revving shriek of Japanese inline-four engines meant that it was an eargasm moment for petrolheads. Mumbaikars came in throngs to support the rally and the most popular spotting destinations were Worli Sea Face and Marine Drive. People of all ages and from all walks of life could be seen waving excitedly as the cars and bikes passed by, while many were trying to capture this special moment on their smartphones and DSLRs. The 2019 Parx-WIAA auto show ended at Ballard Pier, where the cars were parked for viewers to take a closer look at them. Luckily, no unwanted incidents happened during the rally and overall, the event was a great success. As a petrolhead, I am looking forward to more such events where vintage cars and modern cars share the same tarmac as it’s a great way to educate yourself and get the younger generation hooked onto automotive infatuation.