This time around, the bike sports some touring-oriented add-ons 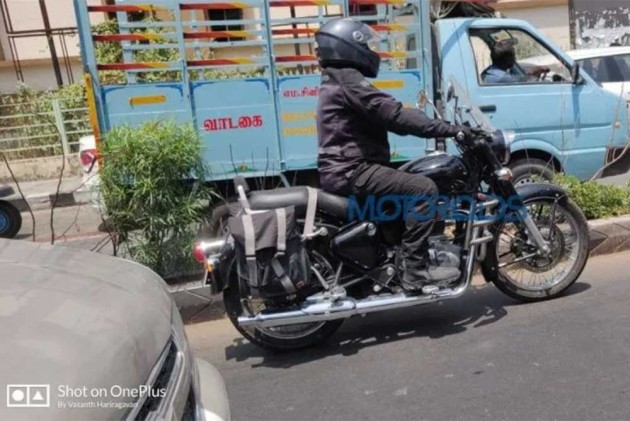 The 2020 iteration of Royal Enfield’s cash cow, the Classic 350, has been spotted testing yet again. This time though, the test mule is seen sporting a bunch of touring-enhancing additions like soft saddlebags, a cushioned backrest borrowed from the Thunderbird range, and a windshield. In the new spy shots, the seat appears to be different from the ones that surfaced on the internet the first time. It is possible that Royal Enfield is experimenting with the seating.

An interesting point to note is that this upcoming model features a single-piece seat unlike the current-gen’s split units, with a sprung rider’s seat. Also, both the rider and pillion footpegs seem to be a lot broader and are distinctly different from the ones in the earlier spy shots. Perhaps are they a comfort-enhancing accessory? Your guess is as good as ours.

The spy shots also give us a clearer glimpse of the bike’s side. The frame has been redesigned and the motor is likely to be derived from the Himalayan’s long-stroke engine platform. That said, it is still unclear whether it’ll have an oil cooler or not. Either way, it will comply with the upcoming BSVI emission norms which will come into effect next year.

Just like the earlier pictures, this one too gets a disc on the right side instead of left. Even its mounting points seem to be different, hinting at the possibility of a slightly bigger disc. There’s a disc at the rear too, and the brake fluid reservoir is located just next to the engine casing. We wonder if this proximity to the engine would affect the viscosity of the fluid, though!

Suspension bits include the same telescopic forks up front but the rear units aren’t visible this time. The bike in the earlier spy shots used traditional twin shock absorbers instead of the gas-charged units as the one in the current model.

Expect Royal Enfield to launch this motorcycle by next year, where it’ll go head to head with the Jawa and the Jawa Forty Two.