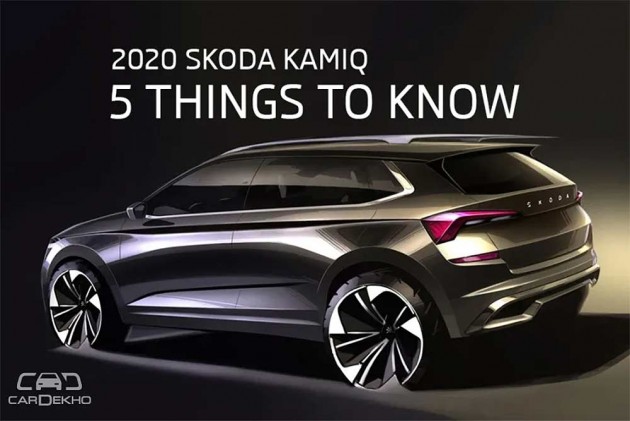 Skoda is all geared up to introduce the smallest member in its SUV lineup next month, globally. Christened the Kamiq, it follows Skoda’s typical SUV nomenclature fashion: beginning with “K” and ending in “Q”. The Skoda Kamiq sits below the India-bound Karoq and the full-size Skoda SUV Kodiaq. And here are five things that you need to know about the Czech automaker’s smallest SUV yet. Since its recent announcement of debuting the Kamiq at the Swiss auto show, Skoda has dropped a couple of teasers of the compact SUV. We expect Skoda to fully reveal the SUV on the Internet ahead of its public debut in March at the Geneva Motor Show (March 7-17, 2019). The Kamiq is the production-spec model of the Skoda Vision X compact SUV concept, which also made its world debut at the same venue in 2018. Skoda’s upcoming compact SUV for India is likely to be inspired by the Kamiq and will be showcased here next year at the Auto Expo 2020.

The Skoda Kamiq will be based on the MQB A0 platform, which is in the process of being localised in India as a part of Volkswagen Group’s India 2.0 business plan. The first product under this new business plan will be a Skoda SUV, followed by its Volkswagen sibling. While VW has confirmed the T-Cross for India, Skoda is yet to confirm the name of the SUV. That said, Skoda recently released a teaser of the India-spec SUV suggesting its 2020 India Auto Expo debut. The SUV in the teaser looks similar to the Vision X concept, on which the Kamiq is based. So, there’s a high probability that the India-spec Skoda SUV will be called Kamiq only.

4. Likely to get a CNG option The upcoming compact Skoda SUV will get a petrol engine, but whether it will get a diesel engine or not has still not been confirmed. Moreover, Volkswagen is rumoured to ditch its 1.5-litre TDI engine once BSVI emission norms kick in from April 2020. However, the VW Group recently disclosed that it is planning to offer CNG versions of their cars in India, just like it does in Europe. The CNG-powered version of the 1.0-litre TSI is called the TGI there and is rated at 90PS and 160Nm.

Volkswagen Group promises up to 95 per cent localisation with future cars under the India 2.0 plan. The level of localisation on the current crop of locally manufactured VW Group cars is close to 75 per cent. So, expect competitive pricing for the German automaker’s MQB A0 IN-based cars. The Skoda Kamiq, for instance, could be priced in the range of Rs 10 lakh to 15 lakh (ex-showroom). It will go up against its own sibling, the T-Cross, as well as the Kia SP2i-based SUV, Hyundai Creta, second-gen Renault Duster and the Nissan Kicks.