Hero Pleasure Plus 110 vs Honda Activa i vs TVS Scooty Zest: Spec Comparison

Does the new Pleasure Plus 110 have what it takes to compete against its rivals on paper? 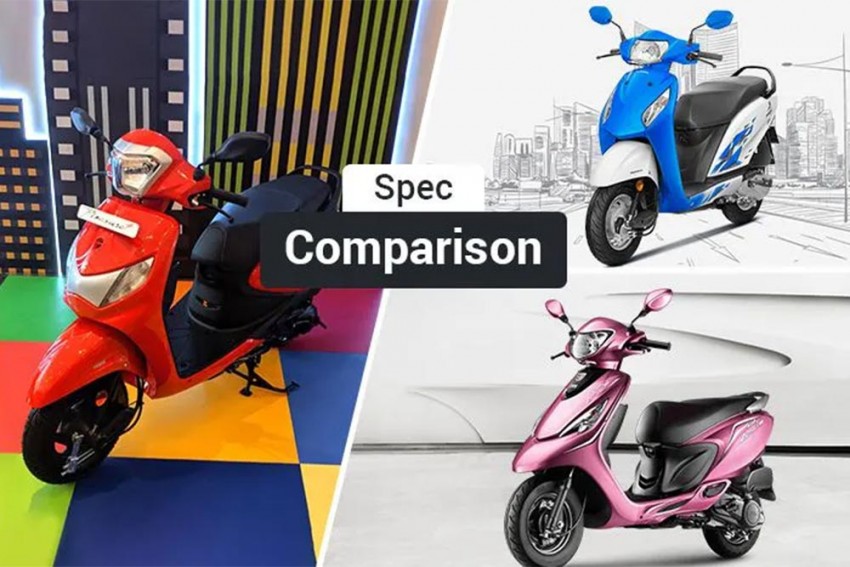 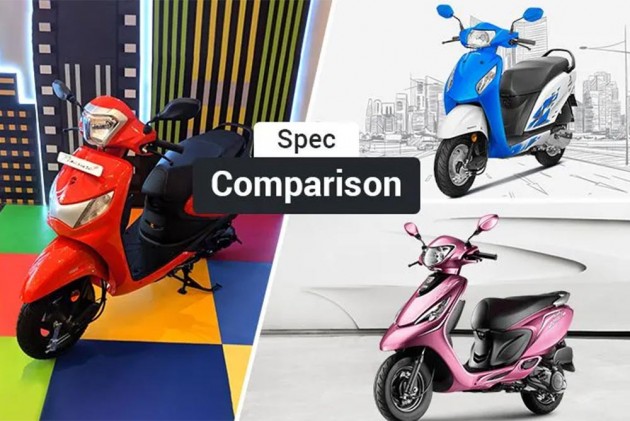 Hero MotoCorp has launched the new Pleasure Plus 110 in India with an all-new design, a tonne of features and a bigger engine compared to the outgoing model. The new scooter may have a lot going for it, but do these updates really help the Pleasure Plus surge past its competition? We pit them against each other on paper to find out: 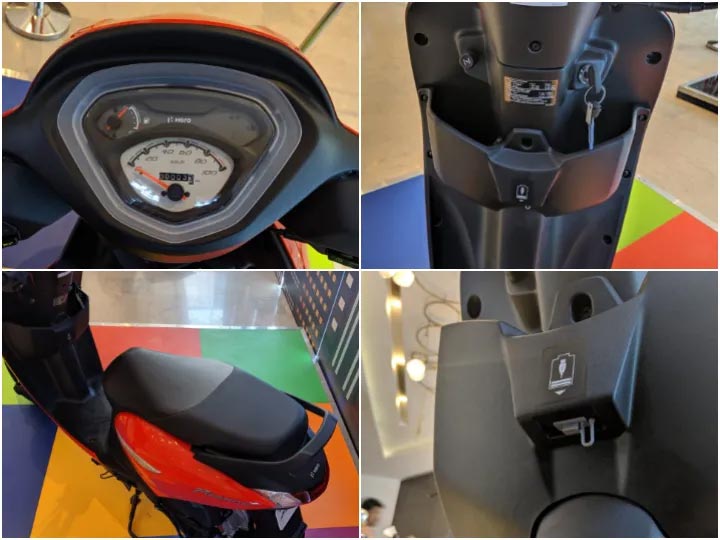 The Hero Pleasure Plus 110 gets a feature list that’s second to none in this segment. To begin with, it gets a split analogue console with side stand indicator, open apron-mounted storage compartment, a USB charging socket for smartphones and an LED boot lamp, all as standard. Besides this, the scooter features a dual-textured seat and silver accents on the body panels which adds to its premium feel. 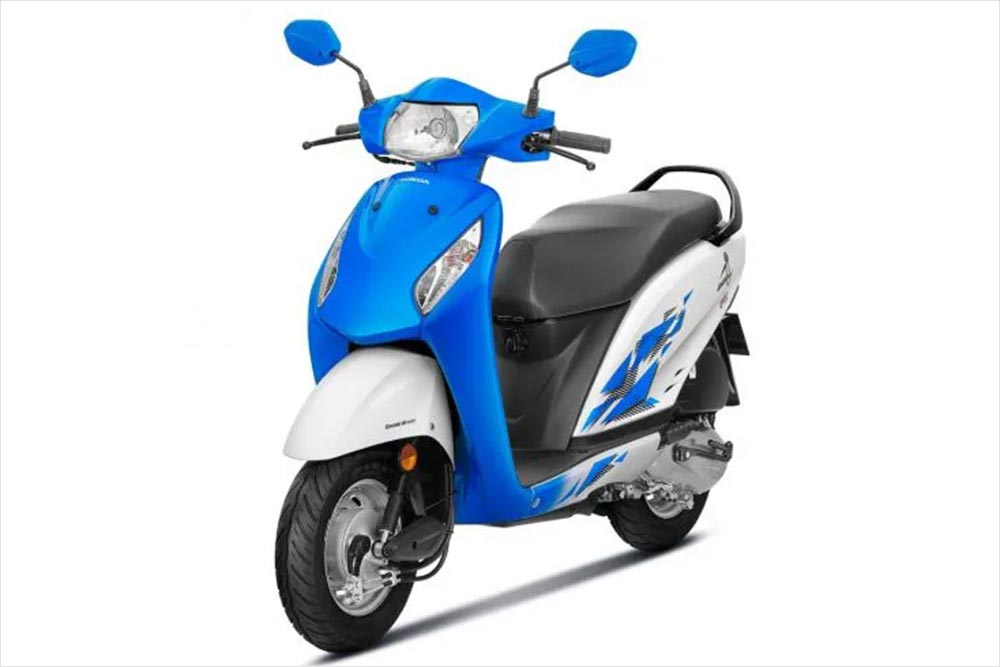 The Honda Activa i, on the other hand, may not be as feature-rich as the Pleasure Plus, but it has its own unique qualities. For one, the scooter comes equipped with a 4-in-one lock with a convenient seat opening switch right next to the key fob. It gets a nifty hook on the front apron, a dual tone instrument console and body coloured mirrors. That said, Honda offers a mobile charging socket in the boot only as an optional extra and the scooter also misses out on a boot light. 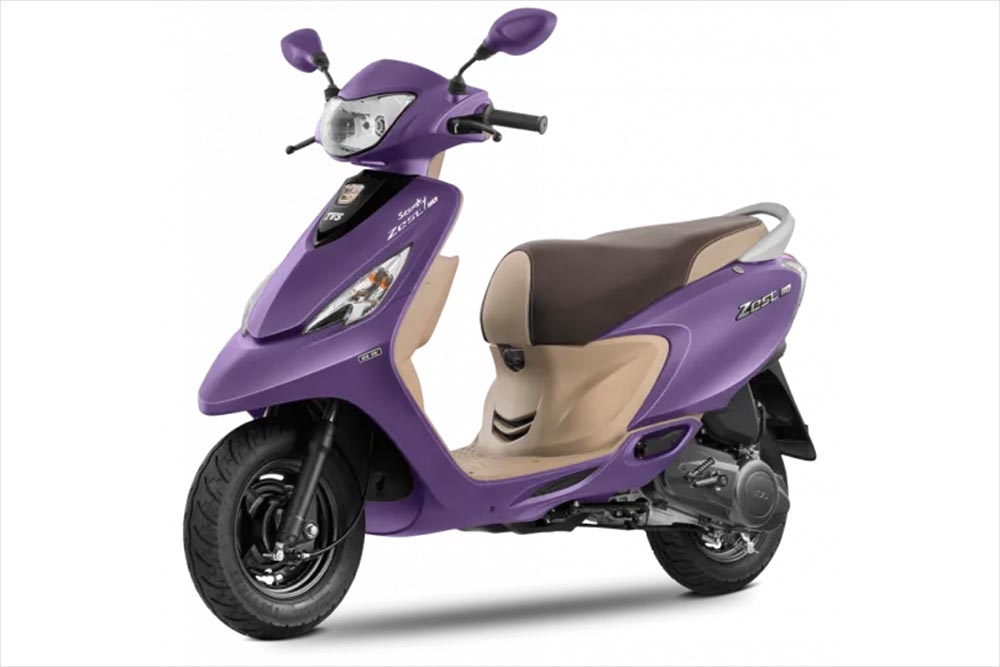 Last but not the least, the TVS Scooty Zest gets a mobile charging socket and boot light, a front hook, and a dual tone coloured seat. It’s also the only scooter in the trio to feature an LED DRL on the front apron and an LED tail light. 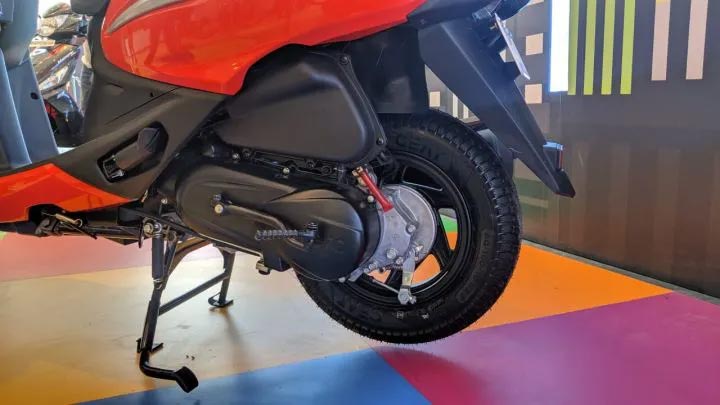 The Pleasure Plus gets a new 110cc engine which gives it a better fighting chance as opposed to the previous 102cc mill. In fact, the new motor makes the best power output in this trio. 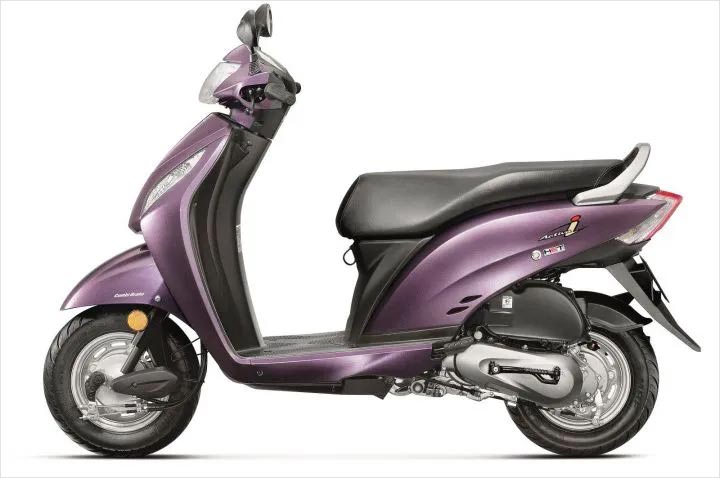 The Activa i may produce the highest torque figure but it also weighs the most compared to the other two. On the other hand, the newest offering from Hero makes almost the same torque while weighing 2kg less, which should help it get off the line a wee bit quicker. As for the Scooty Zest, it generates the least amount of torque, but it’s also the lightest scooter of the lot. This should help the scooter offer slightly better acceleration and sprightlier handling.

What could work against the Pleasure Plus is the fact that it gets the smallest fuel tank of the three, which means more frequent fuel stops. 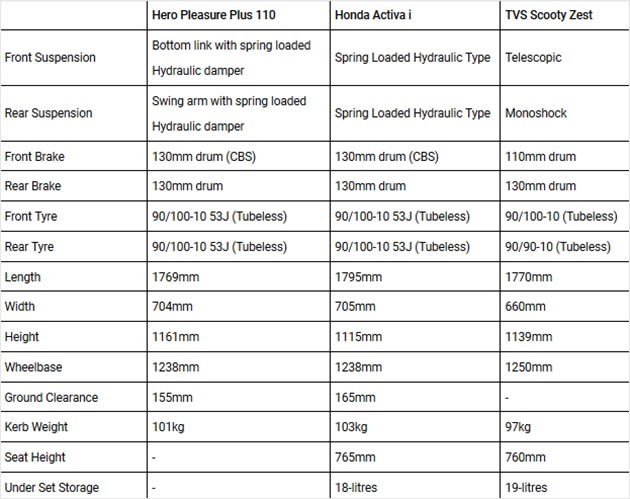 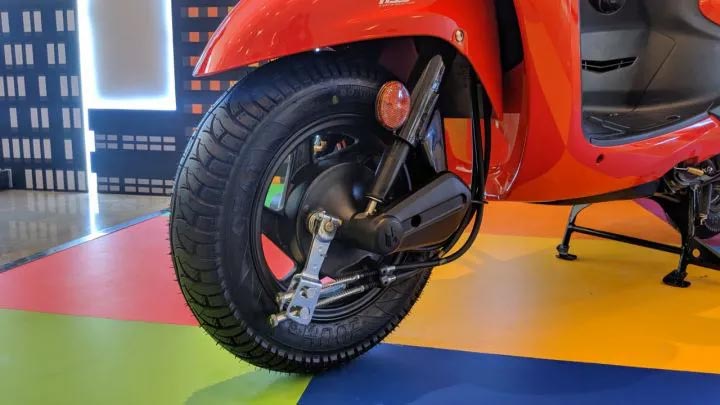 The Hero Pleasure Plus and Activa i are almost identical in terms of underpinnings. Both the scooters feature a 130mm drum brake at both ends paired with CBS (Combined Braking System), which should help them stop better, while the relatively fat tyres could provide better stability. On the contrary, the Scooty Zest gets a smaller front brake, which misses out on CBS, and a slimmer rear tyre. However, it does feature a telescopic fork which should soak up bumps better than its competition. 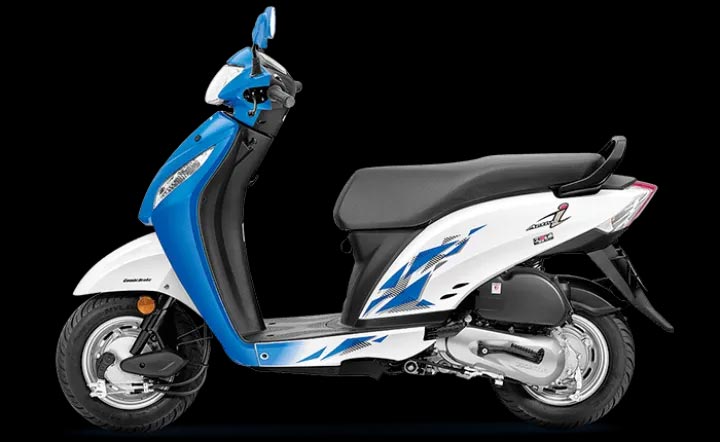 The Pleasure Plus and Activa i have a shorter wheelbase compared to the Zest, which in theory should make threading through city traffic much easier. On the flipside, the Zest is the lightest of the three, which would make it relatively easier to manoeuvre in tight parking spaces. 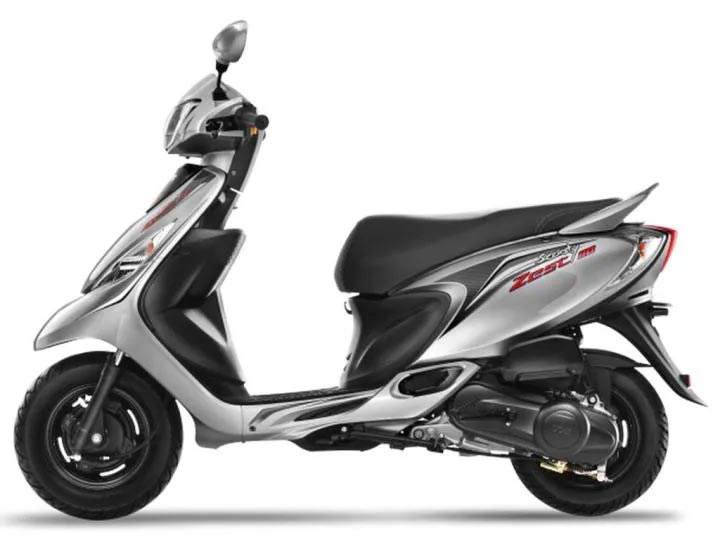 Unfortunately, Hero hasn’t specified the under seat storage capacity of the Pleasure Plus, so we will reserve our judgement about its practicality for our road test review. At the moment, purely based on numbers, the Scooty Zest gets the biggest storage capacity with a 19-litre boot and an open storage cavity behind the front apron. The Activa i comes with an 18-litre boot which should be good enough to store a half-faced helmet. 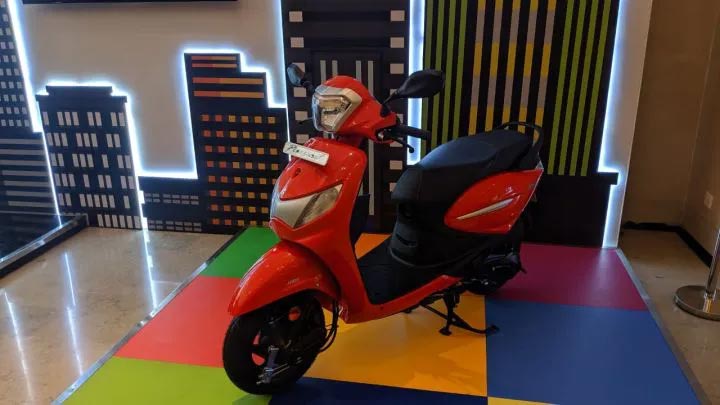 The Hero Pleasure Plus offers the most features, gets a fresh new design and delivers the best power output amongst its rivals. All this without burning a hole in your pocket. As a matter of fact, the top-spec variant of the Pleasure Plus undercuts the Activa i by around Rs 1,700 and the Scooty Zest by Rs 2,200. An exciting proposition indeed! 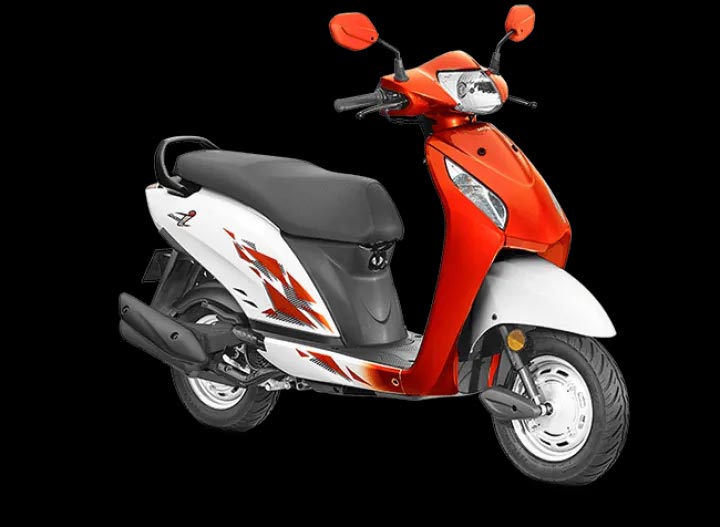 While the Activa i isn't on par with the other two scooters, what works in its favour is the reliability associated with the Honda brand. 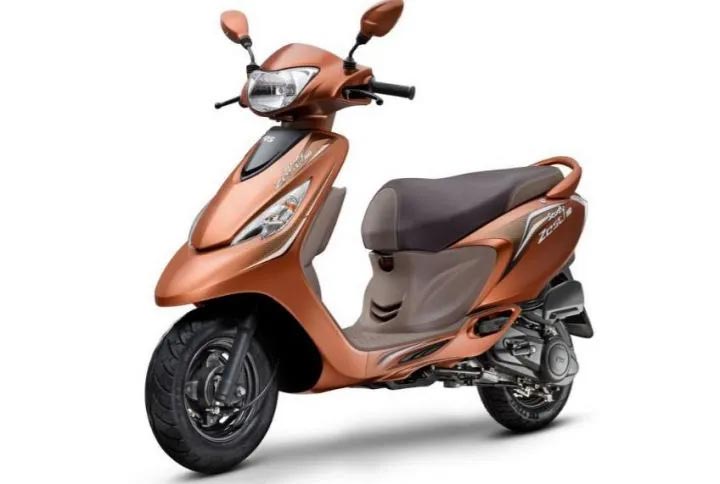 The Scooty Zest might be the most expensive buy here, but the extra dough does get you a better suspension setup, LED DRLs and an LED tail light, amongst other features. So it all boils down to what tops your priority list.