Honda’s upcoming 300cc neo-retro motorcycle has got us all excited. But where does it stand against its competition on paper? 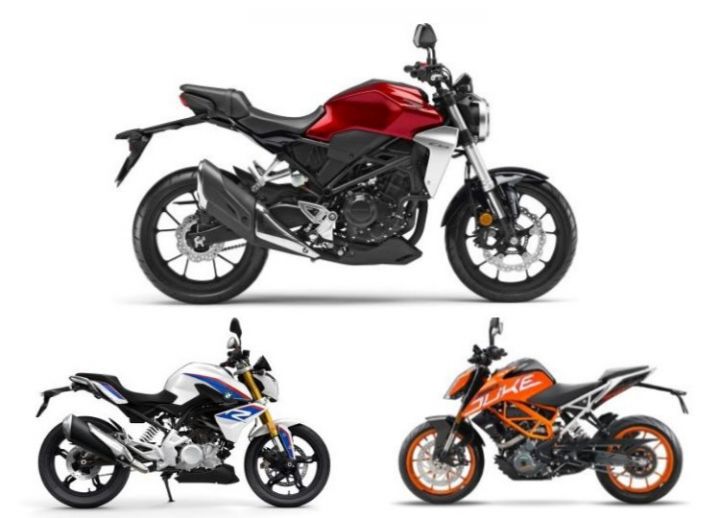 After the CBR250R, Honda didn’t have anything in the budget performance segment, up until now. To be honest, us enthusiasts were almost losing hope in the brand, but just in time, Honda gave us one shocker of a news: the imminent arrival of the CB300R in India! Now, this segment is already populated with two really capable motorcycles, the manic KTM 390 Duke and the mellow, yet capable BMW G 310 R. Obviously, we’re all keen to know how Honda’s 300cc naked contender performs against these two bikes on paper, and here’s how it stacks up. 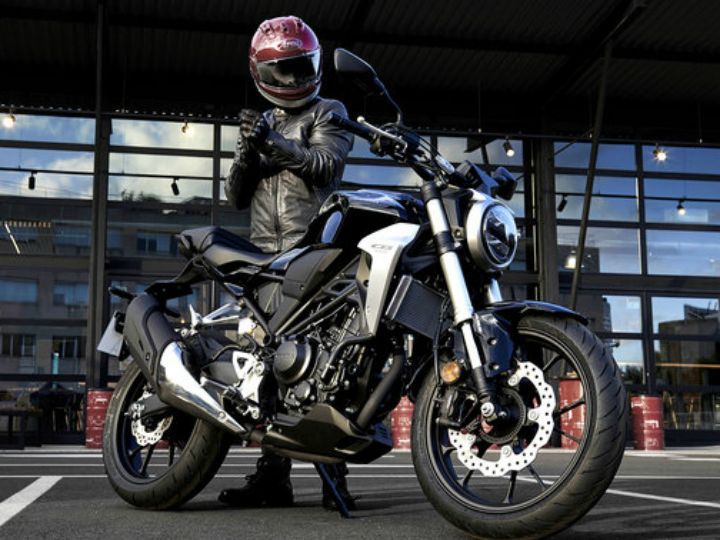 The Honda CB300R’s design is a fresh departure from the Austrian hooligan and the baby Beemer. With the Neo Sports Cafe theme, the Japanese brand has elegantly exploited the whole retro-modern design philosophy. The CB1000R first received this makeover, followed by smaller bikes, including this one. You get a round headlamp complementing the muscular fuel tank, rounded off by a single-piece seat sitting on a short tail section. The overall dimensions of the bike are quite compact, and there are a lot of modern elements like full-LED lighting, liquid-cooled engine, fully digital multifunction instrument cluster and the likes. 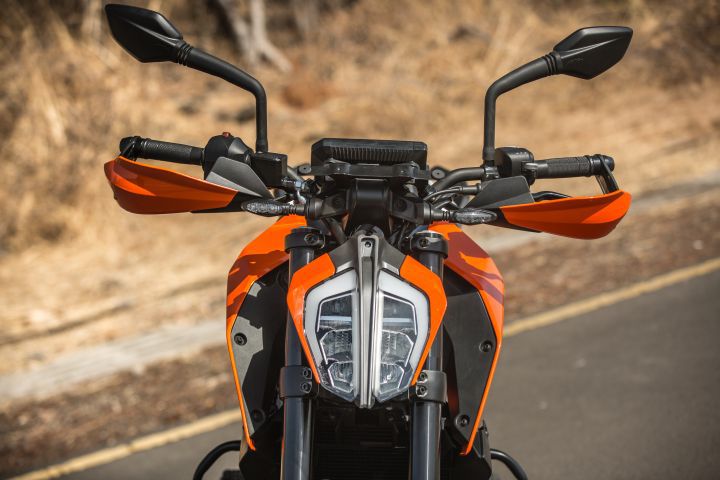 The KTM 390 Duke, on the other hand, incorporates styling cues from its larger sibling, the 1290 Super Duke R. Compared to the Honda, the KTM’s design is quite aggressive and has lots of angular elements. The exposed trellis frame painted in orange further brings out the sporty demeanour of the motorcycle. It also gets a TFT screen that’s smart enough to let you pair your phone for calls and music! 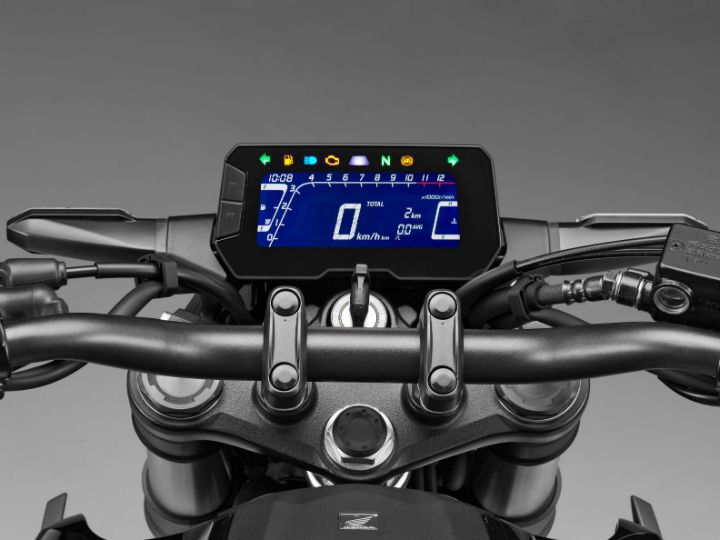 The BMW G 310 R has the most sober styling of the lot. Even though it’s an entry-level BMW, the German marque hasn’t cheaped out on quality. You get very premium-looking gold-finished forks, a chiselled fuel tank, fully digital instrument cluster and a single-piece seat. However, this bike misses out on full-LED lighting and makes do with a halogen headlamp and bulb type indicators. The tail lamp is LED, though. The bike’s design will appeal to a more mature audience, and so will its price tag of Rs 2.99 lakh (ex-showroom). But we’ll come to that later. 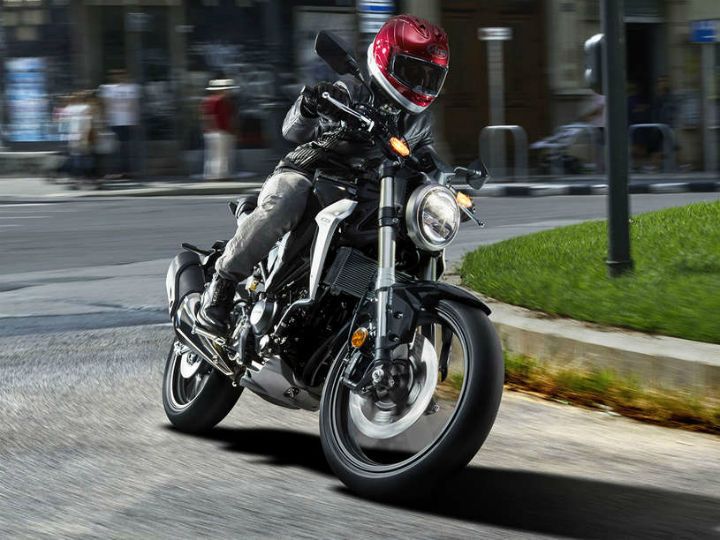 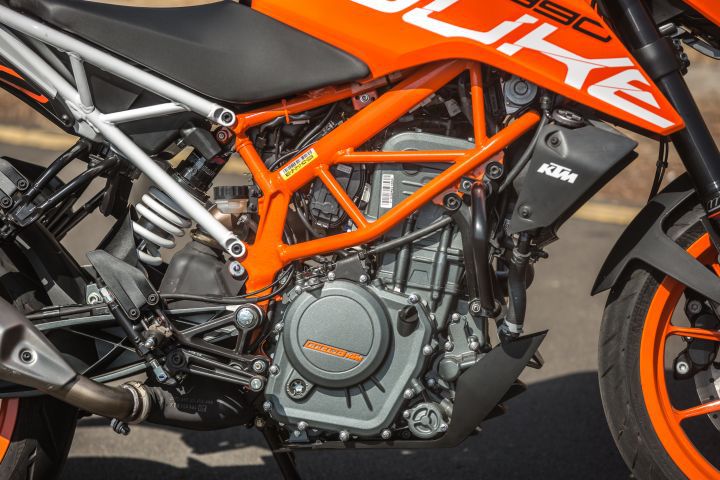 Going by sheer numbers, the KTM is clearly the winner here, thanks to the much bigger engine and performance-biased tuning. Interestingly, despite having the smallest motor among the three, the CB300R’s output figures aren’t that far behind the G 310 R’s. Like the international-spec bike, expect the India-spec model to get a hydraulic clutch, which is intended to make the clutch action lighter and more newbie-friendly. The KTM, on the other hand, features a slipper clutch which facilitates aggressive downshifting without locking up the rear wheel, but this feature isn’t present on either the BMW or the Honda. 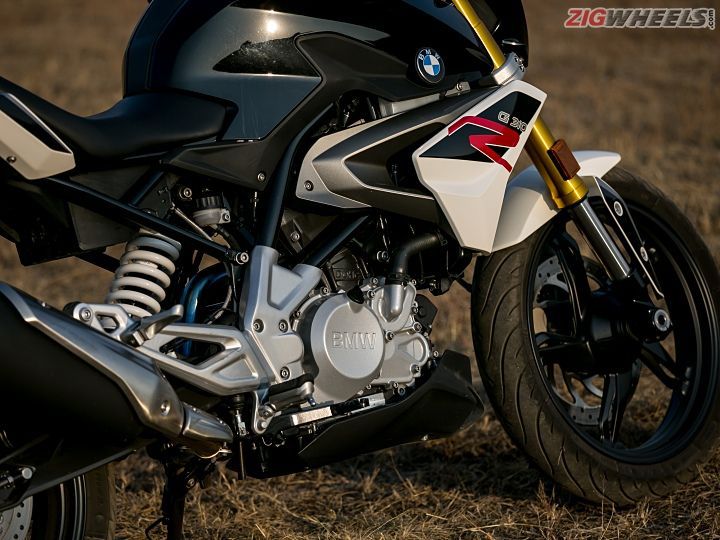 Younger riders will definitely appreciate the relatively frantic nature of the 390 Duke’s engine. The Beemer’s motor is slightly laidback compared to the Duke, but is livelier than its twin from TVS, the Apache RR 310. So, you get a good mid-range, re throttle response and enough grunt to propel you to triple-digit speeds quickly. However, the vibey character of the engine plays spoilsport, and the bike feels most refined doing about 90kmph on the highway. We’re yet to ride the CB300R, but we’re pretty sure it would carry the trademark Honda refinement. Also, going by the highway-friendly character of the CBR250R’s engine, we believe the CB300R will take it up a notch, at least on paper. 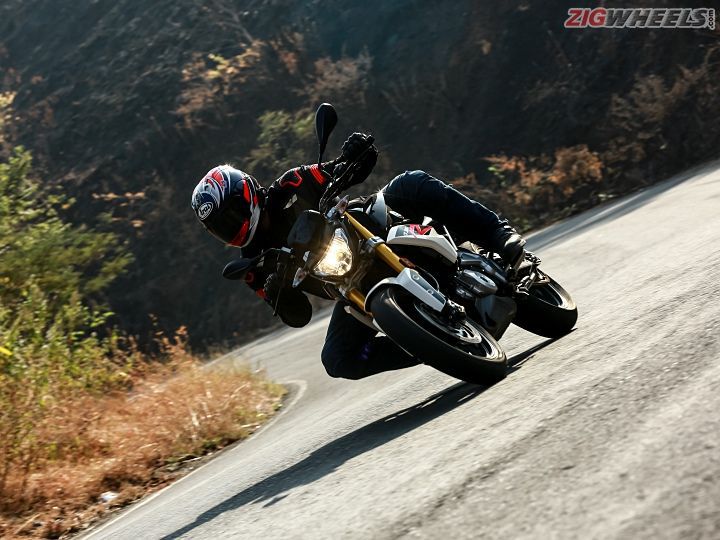 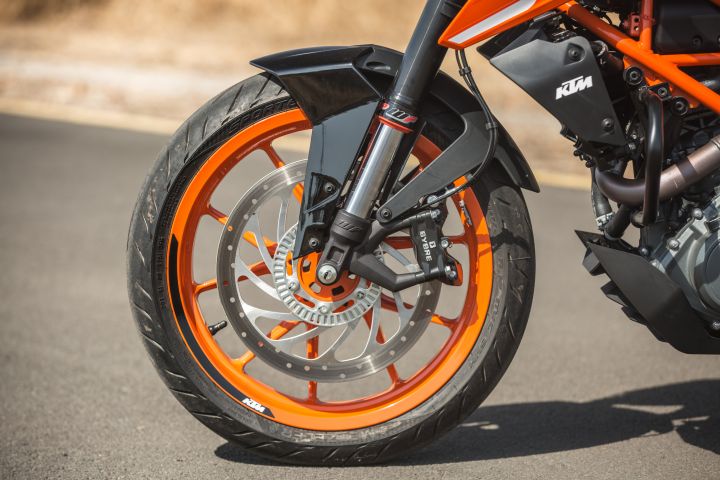 All the three motorcycles feature premium inverted forks and a preload-adjustable monoshock. The G 310 R offers a brilliant balance of good ride quality over bad roads and confidence-inspiring composure on highways as well. The damping characteristics of KTM’s suspension is good enough to be comparable to more sophisticated setups in big bikes. They are communicative and egg you to corner more, just like the Beemer. We’ll get a better idea about CB300R’s suspension once we do a proper review. 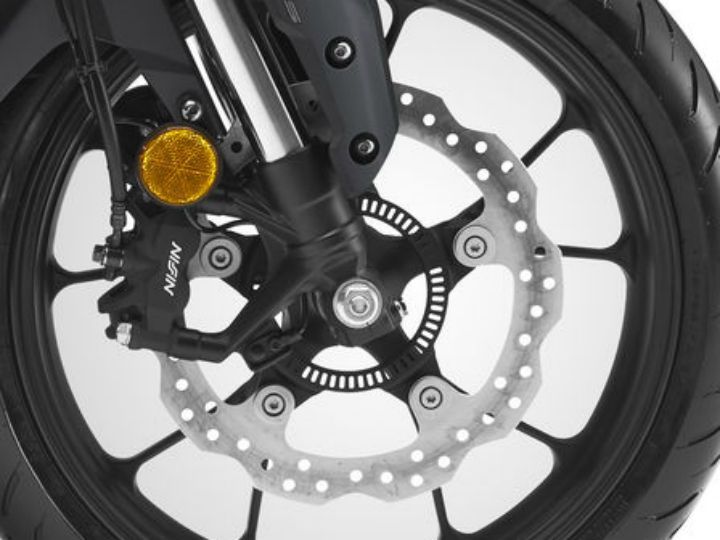 When it comes to brakes, the Honda’s disc size might be small, but its ABS unit is the most sophisticated, working in conjunction with an Inertial Measurement Unit (IMU). The IMU takes into consideration factors like roll, pitch and yaw of the motorcycle and distributes the ABS action precisely between the front and rear. The KTM and BMW, on the other hand, come with traditional dual-channel ABS. 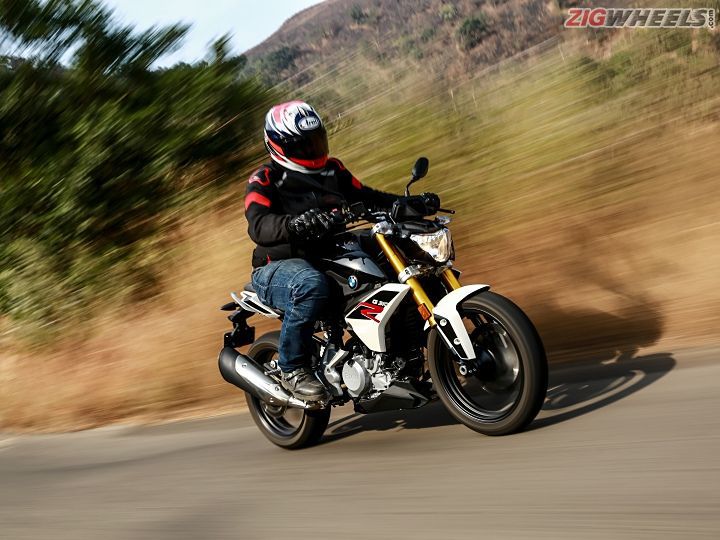 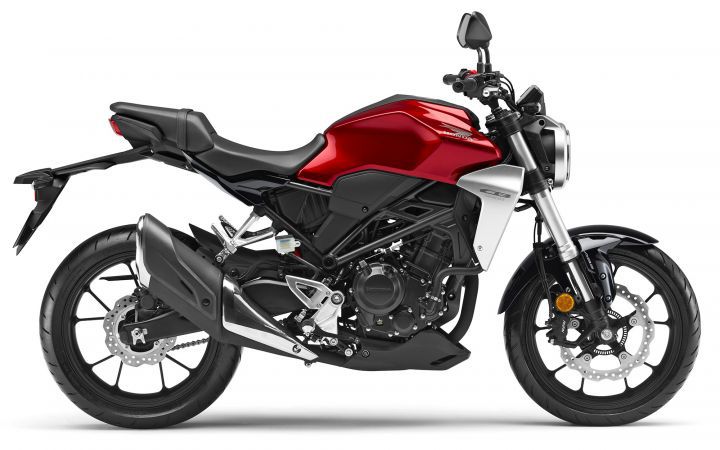 The CB300R has the shortest wheelbase and is also the lightest. This should result in commendable low-speed dynamics and city rideability. Its lighter weight should also result in better acceleration figures.

In our tests, the KTM 390 Duke returned 25.7kmpl in the city and 28.5kmpl on highways, which is pretty reasonable for a performance bike of its category. The Beemer, on the other hand, is surprisingly efficient with 31.86kmpl on the highways and 37kmpl in the city! The Honda returns 30.2kmpl as per WMTC (World Motorcycle Test Cycle). 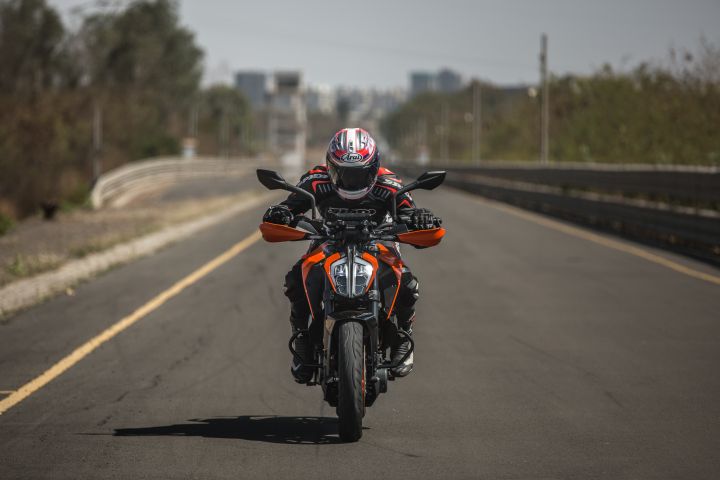 Even though the CB300R is entering our shores via CKD route, Honda has confirmed that the bike will cost less than Rs 2.5 lakh (ex-showroom)! Considering the number of features this motorcycle offers, it should prove to be a value-for-money motorcycle, that offers enough performance to keep most riders, and even quite a few enthusiasts happy. The G 310 R is quite premium and having just the brand value alone doesn’t exactly justify its 2.99 lakh-rupee price tag. Though the 390 Duke is slightly more expensive than the CB300R, it offers staggering value for money, with the highest performance your moolah can buy in this segment.