The compact SUV will rival the Hyundai Creta, Kia SP2i and the Nissan Kicks in India from next year 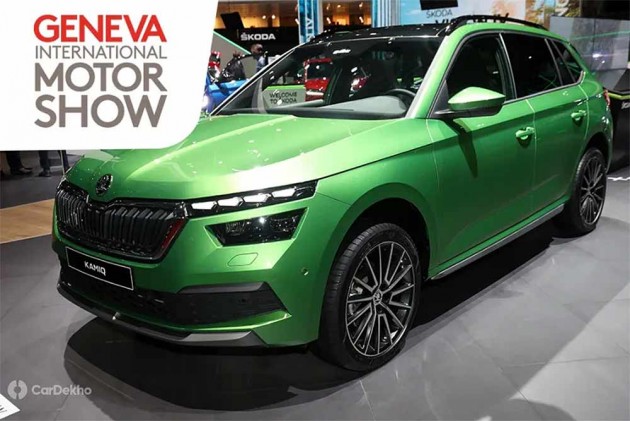 After revealing its name, then the sketches, and making its internet debut, Skoda has finally pulled the wraps off its latest compact SUV, the Kamiq, at the 2019 Geneva Motor Show. The Kamiq will be stacked below the upcoming Karoq and the flagship Kodiaq in Skoda’s India portfolio, showcasing Skoda’s new design direction.

Based on the 2018 Vision X concept, the Kamiq is underpinned by the MQB A0 platform, which Skoda plans on completely localising in India as part of its India 2.0 plan. Up front, it gets split headlamps with LED daytime running lamps and dynamic indicators. At its centre is a typical Skoda grille with honeycomb mesh finished air dam. The side profile boasts of a clean yet strong shoulder line complemented by roof rails. The wheel size on the Kamiq will range between 16-inch to 18-inch but in India, Skoda might offer the 17-inch size. Continuing with the new philosophy, the Kamiq features the Skoda letters spelled out on the boot instead of the Skoda badge and it could be the first Skoda in India to sport this. The boot is flanked by wedge-shaped wraparound taillights with LED elements. Inside, the Kamiq will feature premium fabrics, a 9.2-inch display with voice and gesture control and a 10.25-inch all-digital instrument cluster. The India-spec version might get a smaller 8-inch infotainment system with Apple CarPlay and Android Auto, probably similar to the one on the Kodiaq. The Skoda Kamiq’s storage space could be expansive as it gets 400 litres of boot space, which can be expanded to 1395 litres with the rear seat folded. An optional extra on the Kamiq is the foldable front passenger’s seat to help move items with length close to 2447mm. The Euro-spec Skoda Kamiq comes equipped with lane assist, emergency brake feature with pedestrian detection, adaptive cruise control, park assist, blind spot monitoring, 9 airbags, and rear parking camera with sensors. The India-spec model, however, is likely to miss out a majority of the above features except multiple airbags, ABS with EBD, traction control and ESP. Globally, the Skoda Kamiq is supposed to house three engine options: 1.0-litre TSI in two states of tune - 95PS/175Nm and 115PS/200Nm; 1.5-litre TSI churning out 150PS/250Nm; and the 1.6-litre TDI pumping out 115PS/250Nm. For us in India, though, only the 1.0-litre turbocharged engine is confirmed so far. It might be tuned to produce 115PS of maximum power. Skoda has remained tight-lipped about the availability of a diesel engine so far.

When it arrives in India in 2020, the Kamiq will rival the likes of the Hyundai Creta, Kia SP2i, Nissan Kicks and the upcoming VW T-Cross. Expect prices to start from around Rs 10 lakh.