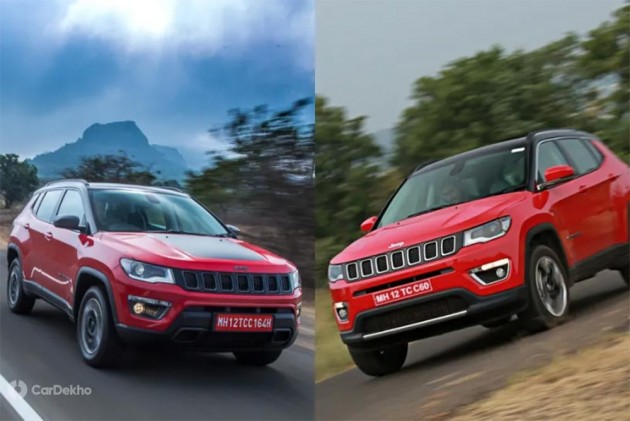 Jeep has finally introduced the more off-road focused version of the Compass in India called the Compass Trailhawk. Set to be launched in July this year, the SUV features various cosmetic as well as mechanical updates to be a more capable off-roader. So, let's dig a little deeper and find out what gives the Trailhawk a unique identity.

Since the Trailhawk is essentially a specced-up Compass, its dimensions are largely similar to the standard Compass. The difference in the length is due to the fact that Jeep has redesigned the bumpers of the Compass for better approach and departure angles. The increased height, on the other hand, is the result of the Traihawk’s higher ground clearance, which stands at 205mm, 27mm more than the standard SUV. 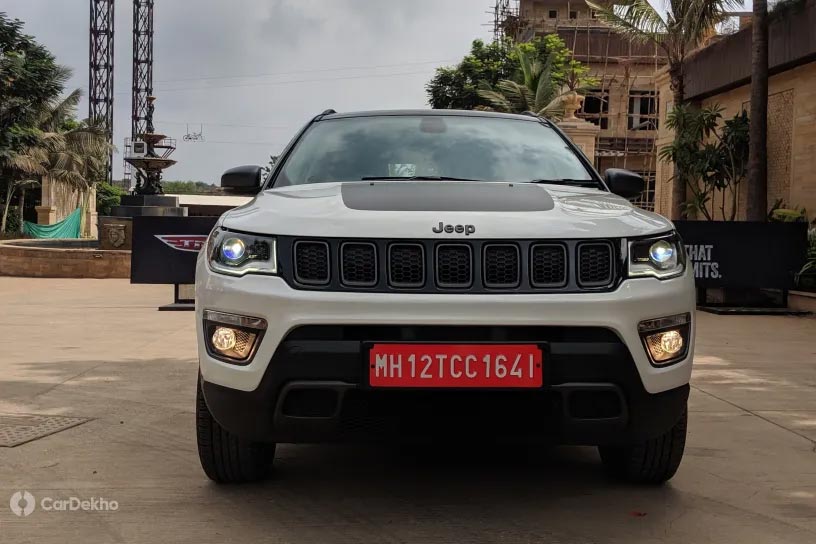 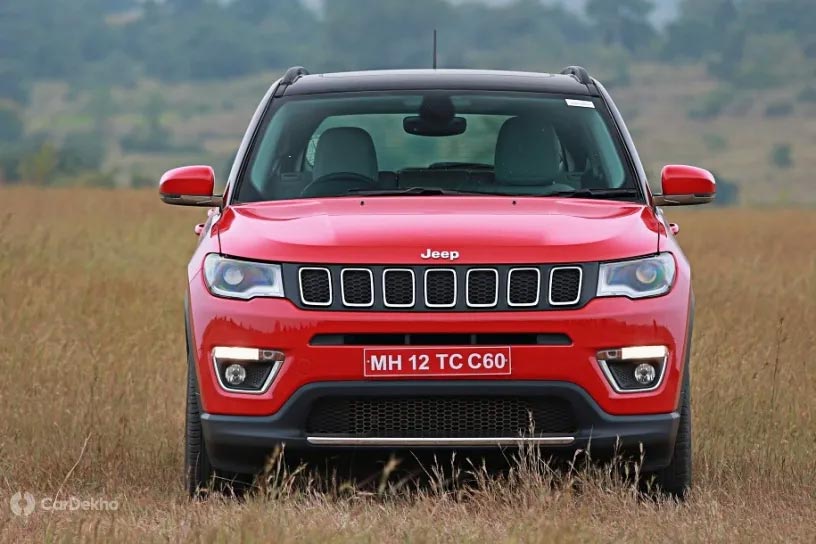 Although the Compass Trailhawk looks largely similar to the standard Compass, it features some aesthetic as well as functional modifications. Upfront, the most noticeable addition is the matte black decal on the bonnet, which Jeep says avoids reflections of the windscreen while going up steep inclines. It also features a matte black grille and fog lamp surrounds (standard variants get chrome finish). As mentioned above, it also gets an updated front bumper for better approach angle. However, it misses out on the signature red hooks at the front, which are offered on the international-spec model. This has been done in compliance with the current pedestrian safety norms in the country. 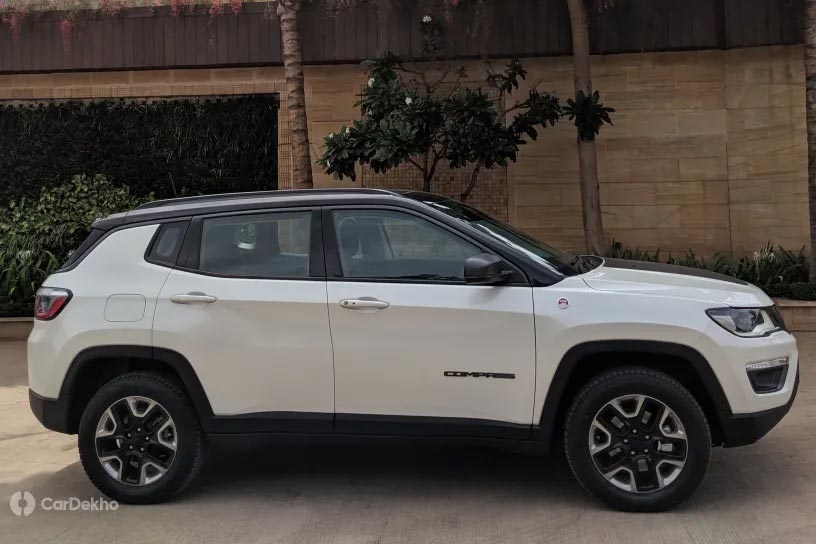 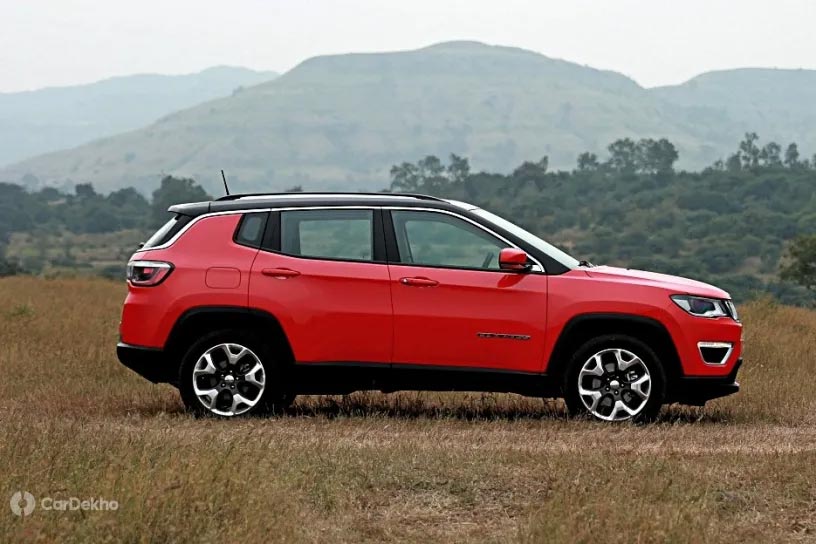 Changes on the side profile include a matte black finish on the window line (finished in chrome in standard car), matte black ‘Compass’ badging and the ‘Trail Rated’ badge on the front fenders. The Compass Trailhawk gets 17-inch alloy wheels instead of the 18-inch units seen on the current top-spec Limited Plus variant. 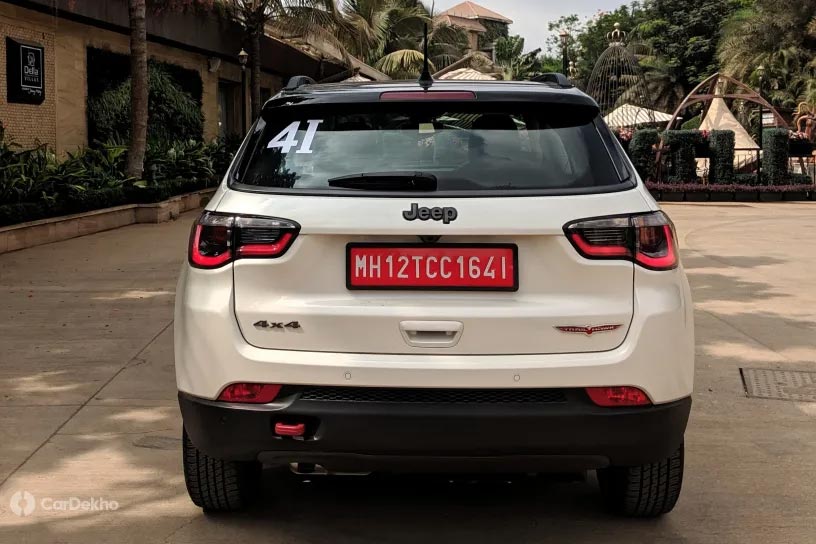 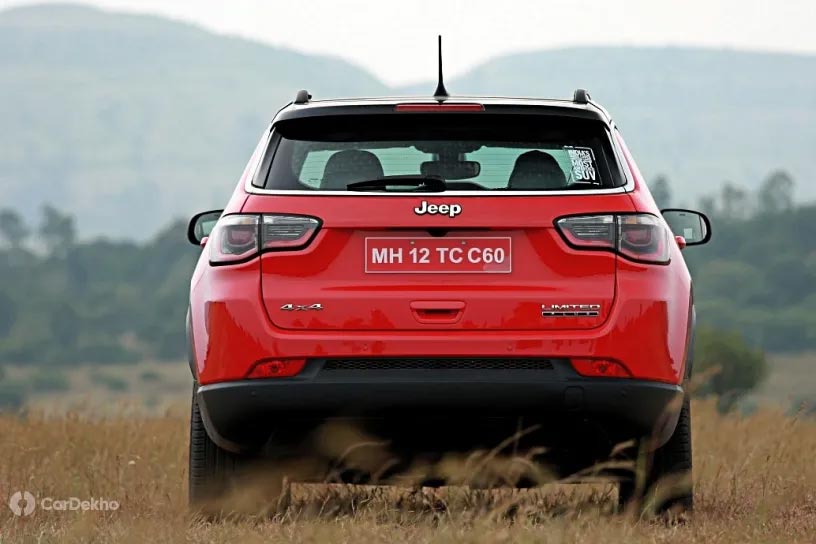 The Compass Trailhawk features changes at the rear as well. All the badges are finished in matte black except for the signature ‘Trailhawk’ badge. The bumper has been updated for better departure angle and it also features the red tow hook that is a signature of Jeep’s Trailhawk models.

Although not visible in the pictures, Jeep has installed underbody skid plates to complement the off-road-focused nature of the SUV. The Compass Trailhawk is available five colour options: Exotica Red, Vocal White, Minimal Grey, Magnesia Grey and Brilliant Black. The standard Compass, on the other hand, gets an additional colour - Hydro Blue. 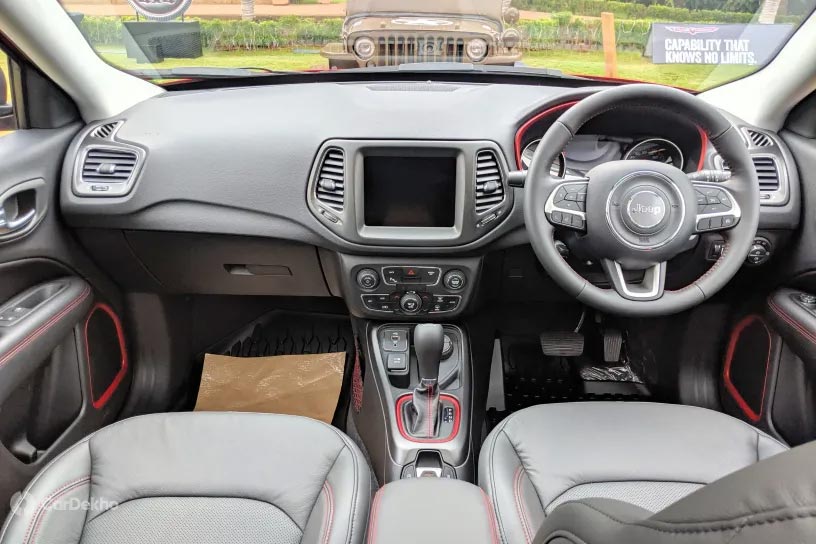 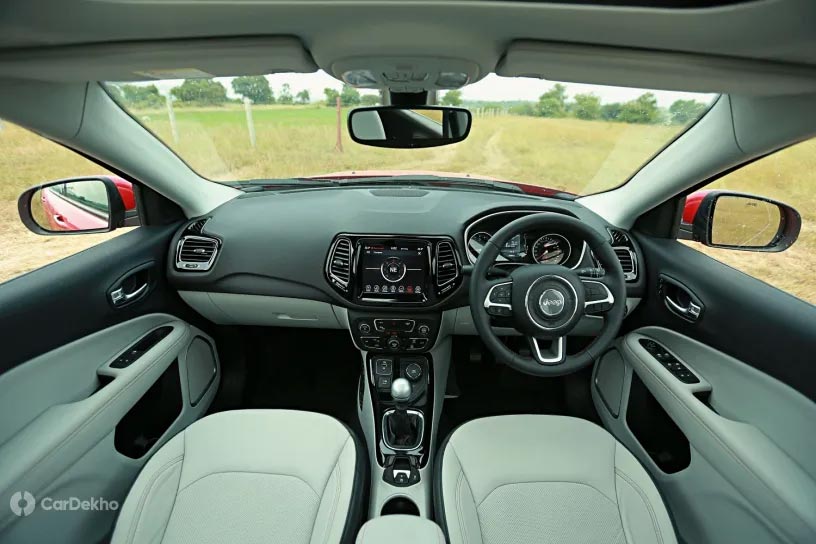 On the inside, while the cabin layout remains identical, it gets red accents to make it stand apart from regular variants. Also, the Compass Trailhawk gets an all-black upholstery while other variants get a dual-tone finish. As far as features are concerned, the Compass Trailhawk shares most of its features with the Compass Limited Plus. So it gets six airbags, a panoramic sunroof, dual-zone AC and an 8.4-inch touchscreen infotainment system with Apple CarPlay and Android Auto. However, it misses out on powered front seats, auto headlamps and rain-sensing wipers that are available on the Limited Plus variant. 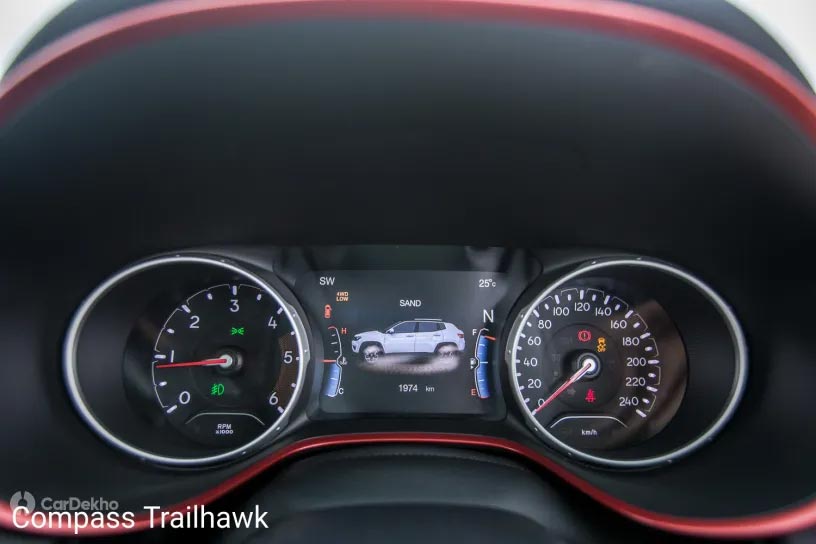 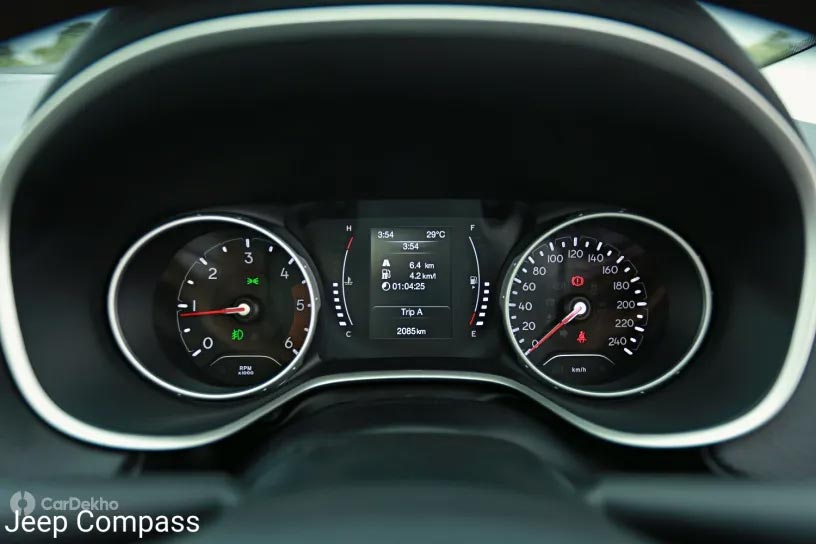 While the Trailhawk misses out on some features, it also gets some exclusive ones like cruise control and an updated multi-info display (MID). 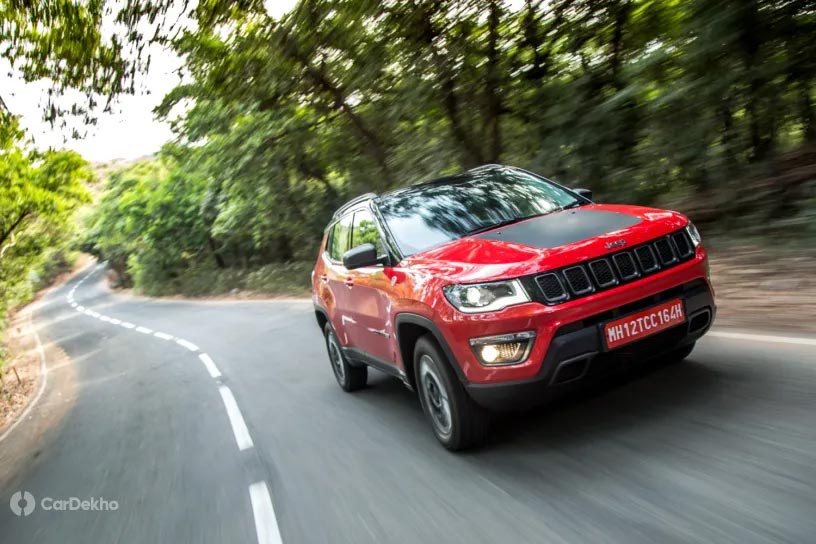 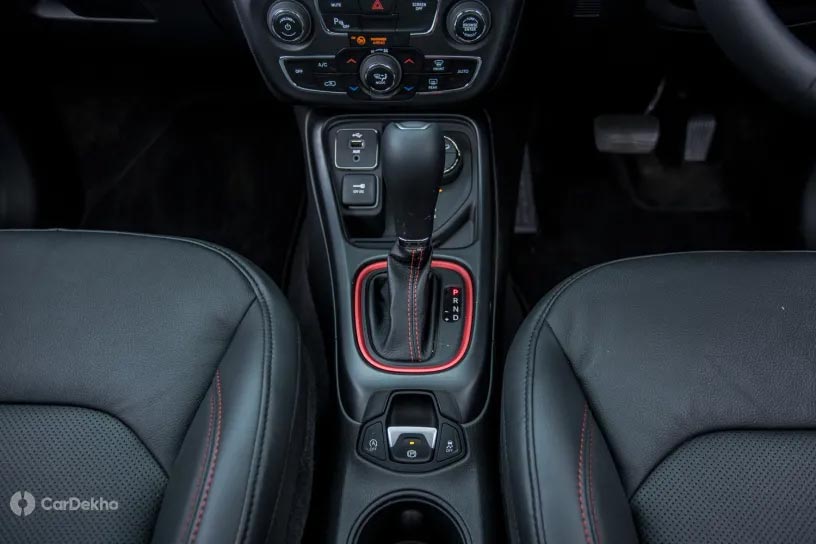 With the Trailhawk, Jeep has introduced a new 9-speed ZF automatic transmission. Until now, the diesel powered Compass could be had only with a 6-speed manual transmission. The Trailhawk also features Jeep’s advanced 4x4 system which offers a low-range gear, hill descent control and a new ‘Rock’ mode. 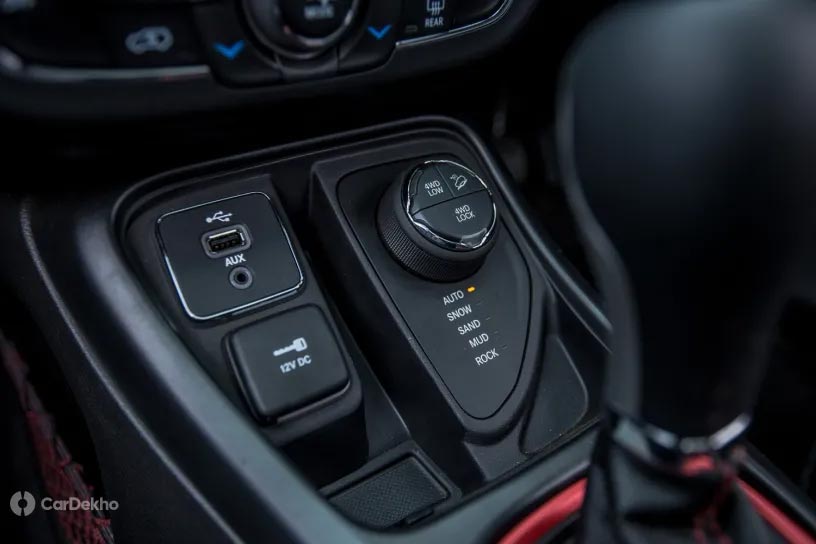 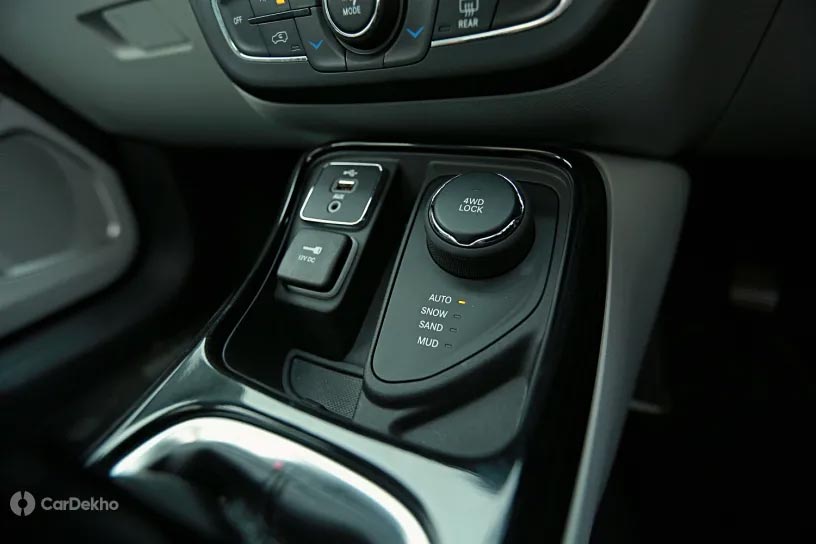 Regular variants of the Jeep Compass are currently priced from Rs 15.5 lakh to Rs 23.11 lakh (ex-showroom Delhi). However, the new top-spec variant, the Trailhawk, is expected to be priced upwards of Rs 25 lakh. When launched, it will compete with the AWD variant of the Hyundai Tucson.