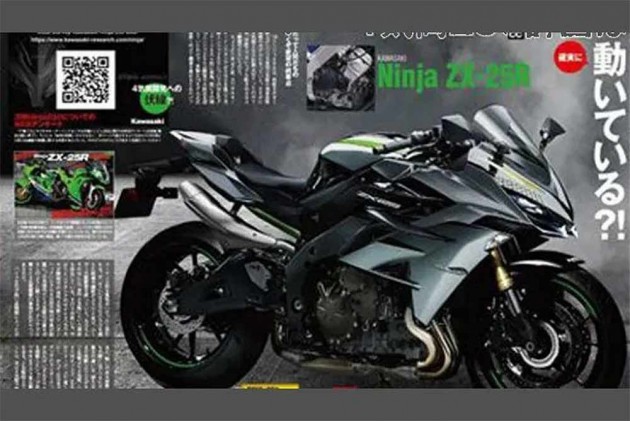 We already knew that Kawasaki was reportedly working on a small-capacity sportbike called the Ninja ZX-25R. What took us by surprise was its phenomenal rumoured power output of 50PS from apparently a 250cc inline four cylinder engine. And as per latest reports, the powerplant is likely to develop even more, 60PS to be precise! Just to put things into perspective, that’s 11PS more than Ninja 400.

The reports also say that the engine could have a rev ceiling of 20,000rpm! Yes, you read that right. Now, you might have seen this sort of figure either on a race-spec MotoGP bike or a superbike. But from a small 250cc mill. No, right? So how did Kawasaki come up with a pint-size engine that could work at such high rpms? Though we don’t know yet, but if this engine exists, it is likely to feature high-strength, lightweight materials, which can sustain the abuse that this motor would dish out.

What else do we know about the Ninja ZX-25R? For starters, it is likely to have the same design language as the Ninja H2. And it is expected to get features such as LED headlamps, digital instrument console and ride-by-wire.

Currently, there’s no confirmation about the official launch, but if we were to guess, Kawasaki might showcase the Ninja ZX-25R at the upcoming Tokyo Motor Show. There is also a high likelihood that this could be a Japanese Domestic Market (JDM) bike and never make it out of Japan. Hopefully, we should get more info on this mad bike soon.