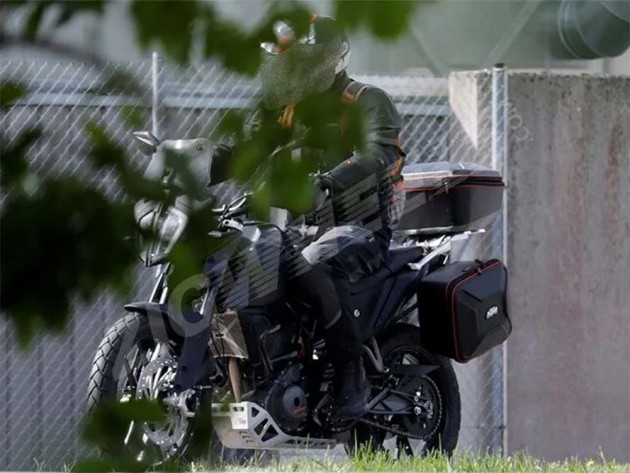 We were the first to give you a sneak peek of the upcoming KTM 390 Adventure with accessories in India. This time though, the bike has been spotted in Europe with the same add-ons but sans camouflage. The new spy shots reveal a new radiator guard, aluminium bash plate, soft panniers with top box - all carrying KTM’s branding. This clearly indicates that these accessories have been designed specifically for the 390 Adventure. The panniers feature a zipper system and are removable as well. Also, due to the exhaust’s location, the right side pannier will have slightly less cargo capacity compared to the one on the left. We would’ve liked it if KTM offered lockable hard cases though.

There’s also a rugged engine guard, just like the one on the India-spec bike. Another aspect that's common with the India-bound motorcycle is the adjustable WP front forks with an offset axle. This will allow KTM to run a slightly raked-out front end for increased stability while still keeping a shorter trail to reduce steering effort. The brakes seem to be the same 320mm disc with a radial caliper as the one in the 390 Duke. Just like the India-spec model, this one too rolls on alloy wheels, presumably a 19-inch front and 17-inch rear. However, unlike the Indian model’s Continental TKC 70 tyres, this one wears Metzeler Tourance tyres. It is possible that KTM is experimenting with different tyre brands to figure out which one suits the bike best. That said, these (or similar) Tourance tyres are available in India as well, notably on the BMW G 310 GS. The powerplant features the same exhaust routing as the one spied in India. It hints at the fact that the upcoming motorcycle will be compliant with Euro V emission norms as the regulations will come into effect in the EU from January 2020 onwards for new bikes. Expect the 390 Adventure’s engine to have a different tuning, possibly with more low-end grunt to enhance its ability off the road.

Coming to the smaller nitty-gritties - the switchgear and the instrument cluster appear to be the same as the one found in the 390 Duke. There seems to be what looks like a USB charger near the left switchgear. However, it looks different compared to the USB charger available through the KTM’s PowerPart catalogue. But there’s a good chance that it could be part of some test equipment KTM is using on the mule.

The KTM 390 Adventure will make its debut at this year’s EICMA show in Milan, followed by its India launch by the end of this year or early next year. In the Indian market, the upcoming ADV will go up against the Royal Enfield Himalayan, Kawasaki Versys-X 300 and the BMW G 310 GS.