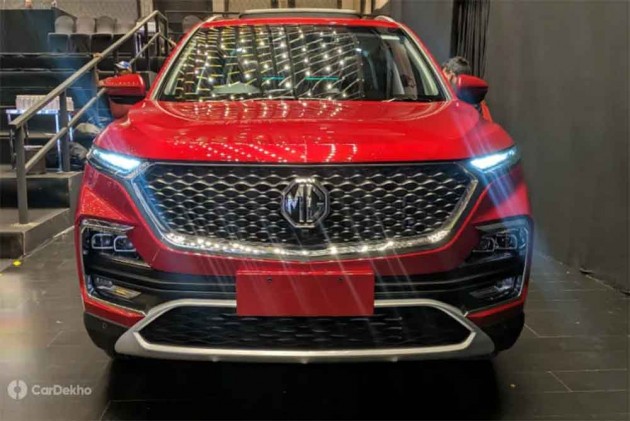 The MG Hector has been unveiled inside out and now a leaked document has revealed the variant-wise features, powertrain options, and fuel efficiency details. According to the leaked document, Hector will be available in four variants - Style, Super, Smart and Sharp. Bookings are supposed to begin in early June, ahead of its launch in the same month.

The leaked document suggests that both petrol and diesel engines will be on offer across the variant lineup with a manual transmission option. Only the petrol engine will be available with a dual-clutch automatic transmission, that too in top two variants -- Smart and Sharp. MG will offer a 48V mild hybrid system with the Hector’s petrol engine in all variants apart from the base Style.

While MG has already revealed the engine output, the leaked document reveals claimed fuel efficiency figures of both the petrol and diesel engine. The petrol engine will reportedly return 14.16kmpl with the manual transmission and 13.96kmpl with the automatic. MG says the 48V mild hybrid setup can increase fuel economy by up to 12 per cent, so we can expect the Hector hybrid to deliver somewhere around 15.5kmpl. For the diesel engine, the fuel efficiency figure mentioned in the leaked document is 17.41kmpl. Here’s how the Hector compares against its rivals as far as engine specs are concerned. Before getting into the variant-wise feature details, here’s what will be on offer from the base variant onwards: The variant-wise features as per the leaked doc are as follows:

MG Hector Style is the base-spec variant. It will be equipped with the following features: One step above, the Hector’s Super variant is better equipped. While the prices will be announced in June, in terms of features, this is the entry-variant one should consider. Here’s what it offers over the previous variant: The Smart variant of the Hector is one step below the top variant while being the entry point for the petrol-automatic option. It offers the following features over the previous variants:

Safety - Side airbags for a total of four.

Audio - 8 speakers and a subwoofer This is the top-spec variant of the MG Hector mid-size SUV with all the bells and whistles. Here’s everything the upcoming Harrier rival has to offer on top of the previous variants:

The MG Hector will face off against the likes of the Tata Harrier, Jeep Compass, Mahindra XUV500 and Hyundai Tucson too. It is expected to be priced between Rs 15 lakh to Rs 20 lakh.