Ford recently updated the Aspire and gave it a new petrol engine. We tested it and here’s a how it fared against the Dzire petrol 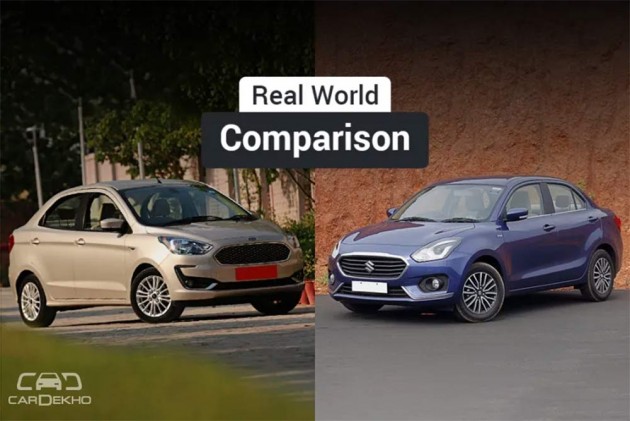 The Ford Aspire recently received a facelift and while there’s a fair share of cosmetic updates that bring it more in line with current trends, it is what has changed underneath the bonnet that we are more interested in for this report. Yes, we are talking about the new 1.2-litre, 3-cylinder petrol engine that churns out 96PS. It replaces the older 1.2-litre, 4-cylinder petrol engine that dished out 88PS of maximum power. To find out how well it does in real world conditions, we pitted its manual version against the best-selling car in its segment, the Maruti Suzuki Dzire (petrol-MT).

The Dzire seems to have the upper hand, albeit marginally, as far as the 0-100kmph and quarter mile drag is concerned. The gap is less than a second and it ultimately boils down to the driver’s skill. However, it’s a whole different story when you compare both cars’ roll-on figures. The Dzire is a lot quicker than the Aspire. It’s almost a second quicker than the Aspire in the 30-80kmph run in third gear and almost a couple of seconds quicker in the 40-100kmph run in in fourth gear.

But if you compare their braking performance, the Dzire has a slight edge over the Aspire. However, the gap is not big enough for the Dzire to be crowned the outright winner in this category.

As far as fuel efficiency is concerned, both cars as frugal as the other in the city. However, the Aspire manages to better the Dzire by just .07kmpl during our test. On the highway, the Dzire comes into its own and outclasses the Aspire by more than 1kmpl. If you take into account a mix of city and highway driving, it’s the Dzire that is more frugal. The difference, however, isn’t that big.

The Maruti Suzuki Dzire manages to outdo the Ford Aspire as far as performance is concerned. That said, the difference between the two is quite marginal. In terms of fuel efficiency, the Dzire manages to outdo the Aspire on the highway. It is only in the city where the Aspire has a slight advantage over the Dzire. In terms of outright performance as well, both cars are neck-and-neck, but the Dzire again has an advantage when it comes to in-gear acceleration. That makes the Dzire the car of choice as far as the petrol-MT powertrain options of both are concerned.