Explore the new MPV in all its detail 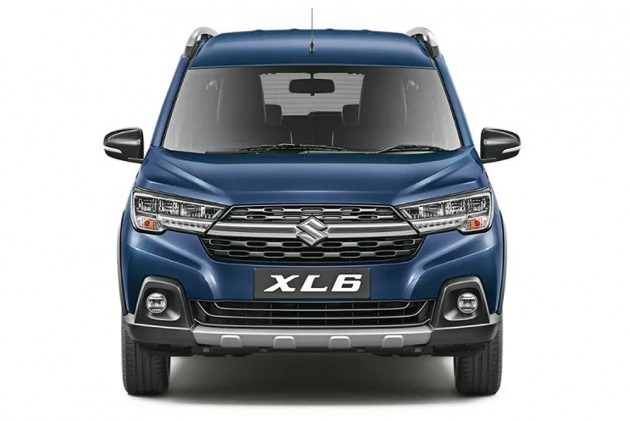 The new Maruti XL6 has been launched and it is priced from Rs 9.8 lakh to Rs 11.46 lakh (ex-showroom, India). It is based on the Ertiga but is a more premium MPV and will only be sold via the NEXA chain of dealerships.

The XL6 features a refreshed front end design with a more premium and rugged appearance than the Ertiga. It is 40mm wider than the regular Maruti MPV which measures 1735mm in width. 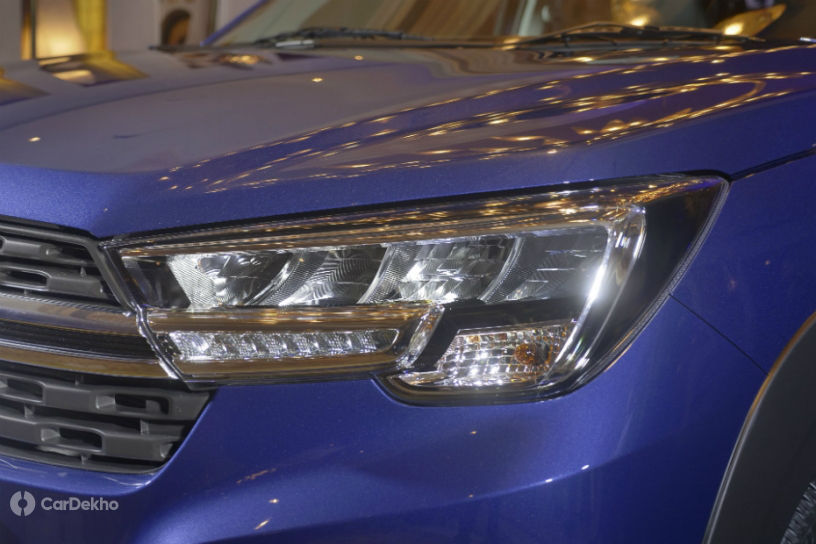 It gets a three-part multi-reflector LED headlamp unit with LED DRLs and the turn indicators in the bottom corner. 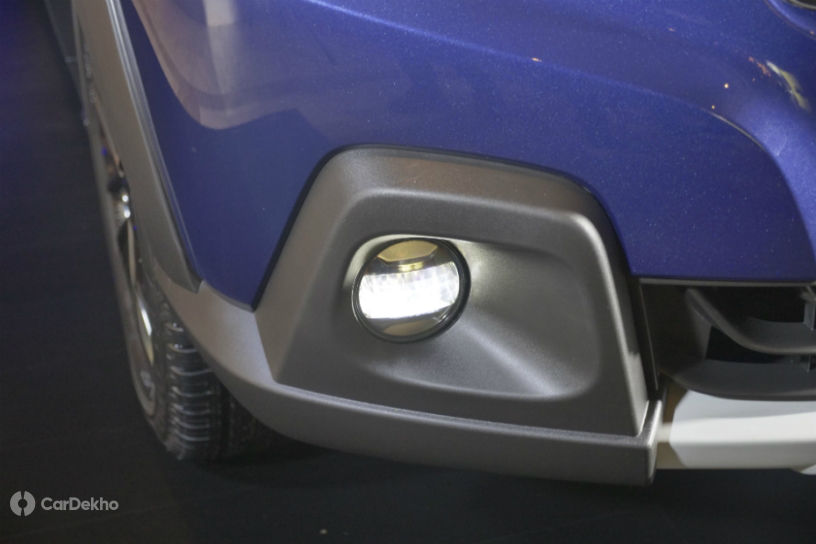 Even the front fog lamps are LED, surrounded by plenty of rugged cladding and positioned on either end of the front bumper with the air dam in between. 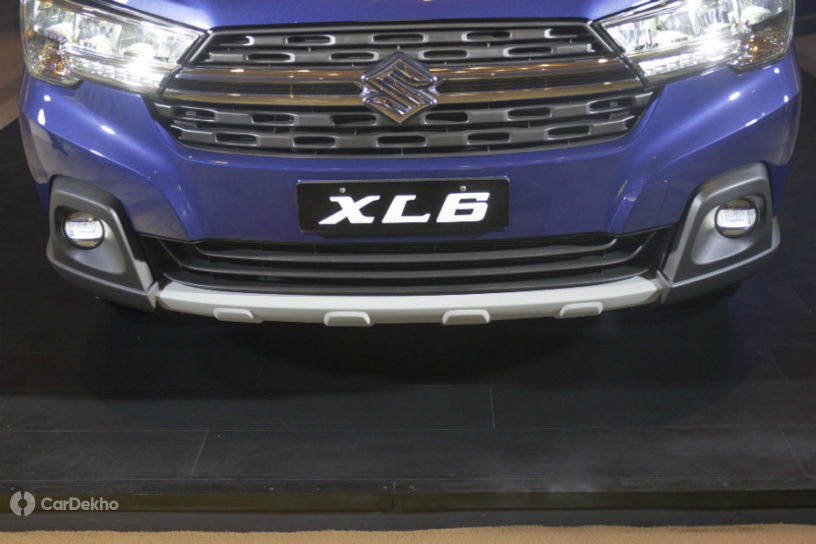 The front grille of the XL6 is mostly blacked out with two chrome strips in the middle that continue the design line of the LED DRLs at either end. 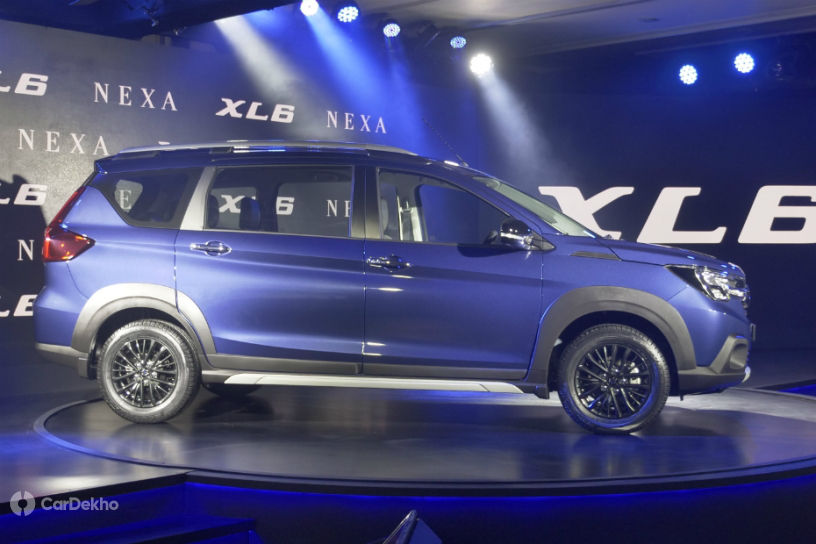 The side profile silhouette is quite similar to that of the Ertiga, since both are nearly identical MPVs and have the same wheelbase. However, with the redesigned front profile, the XL6 measures 4445mm long overall which is 50mm more than the Ertiga. The grey-silver side skirts also add to the XL6’s premium persona, contrasting against the black cladding. 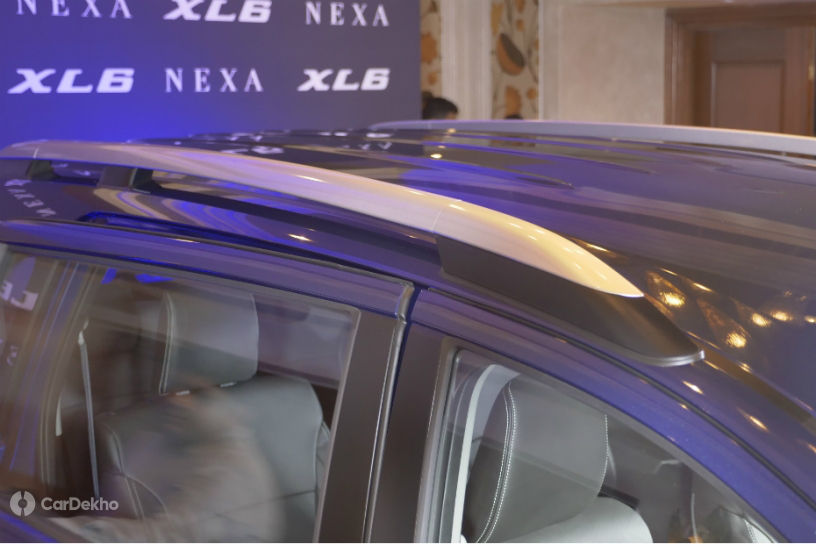 The roof rails also add an extra 10mm to the XL6 over the Ertiga’s height. 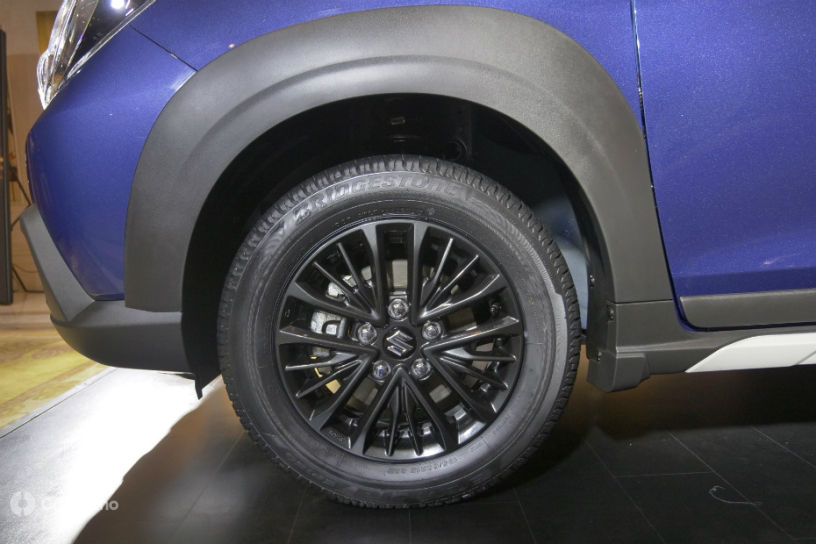 Maruti has fitted the XL6 with same set of multi-spoke 15-inch alloy wheels, but they are finished in gloss black that lend this MPV a sporty appearance compared to Ertiga. 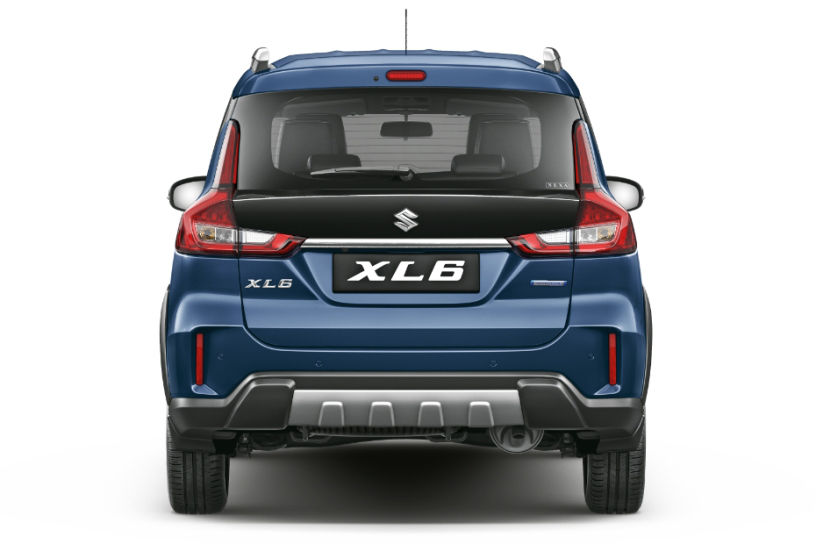 Most of the rear end of the XL6 looks similar to the Ertiga, such as the taillamps and tailgate with the chrome strip connecting the taillights. It does feature a new rear bumper which has more black cladding and a rear faux skid plate to continue the rugged and premium theme of the XL6. The rear reflectors are vertically aligned as compared to the horizontal units on the Ertiga. 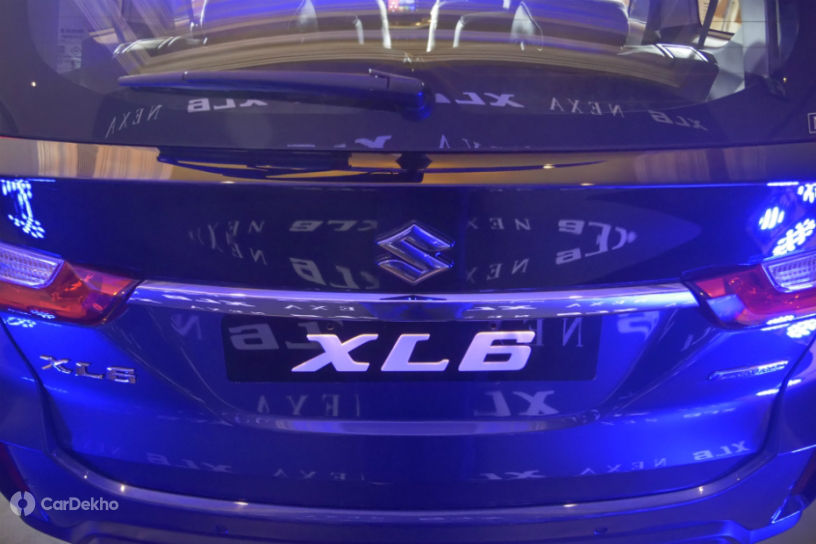 It also has a gloss black section above the chrome line on the tailgate. 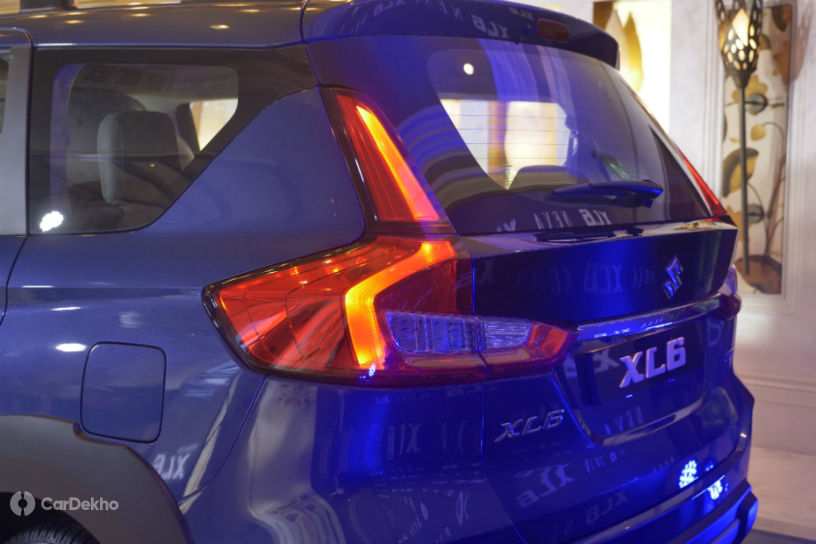 The tail lamps are the same LED units as offered on the Ertiga, but feature a Volvo like LED light guide unlike the Ertiga. 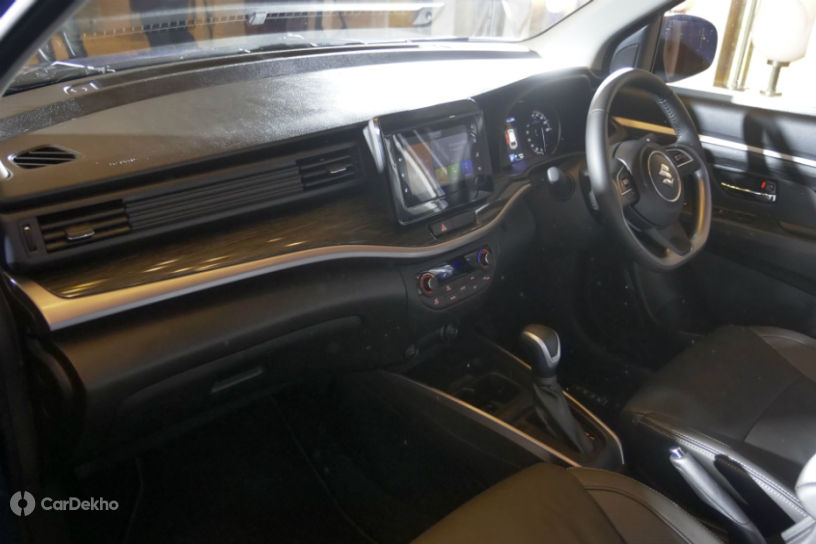 The Maruti XL6 has an all-black interior with the same layout as the Ertiga. 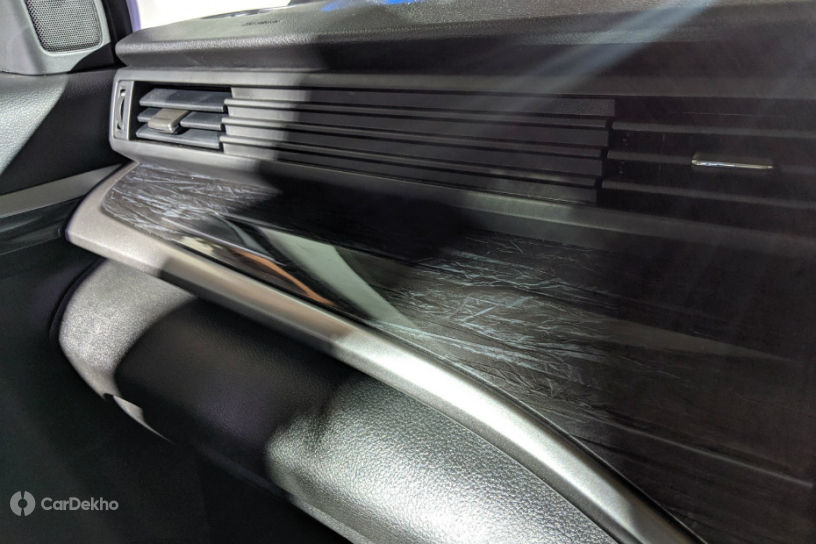 The dashboard is garnished with a stone effect as a premium touch to the XL6’s cabin. 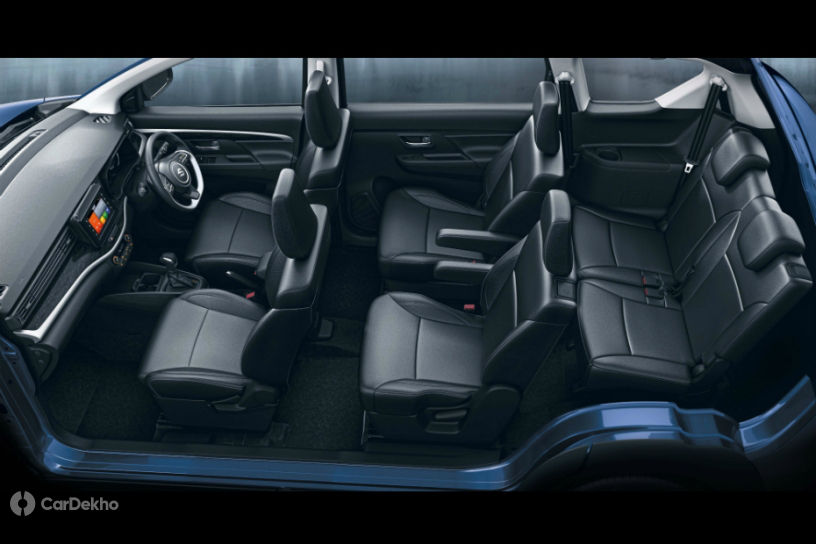 As the name may suggest, the Maruti XL6 is a 6-seater offering with captain seats in the middle row. 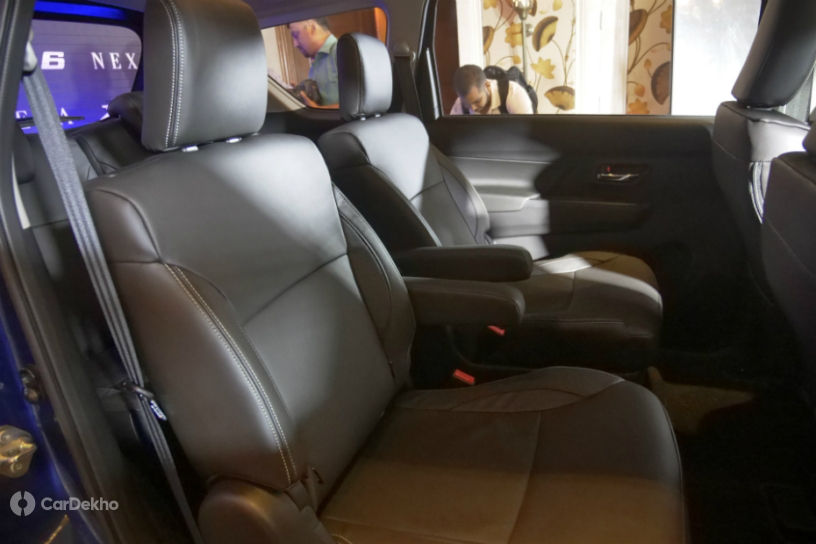 These all-black leatherette seats come with their own aisle-side armrests along with the doorside armrest. Captain seats are relatively more comfortable and spacious compared to bench-type seat. 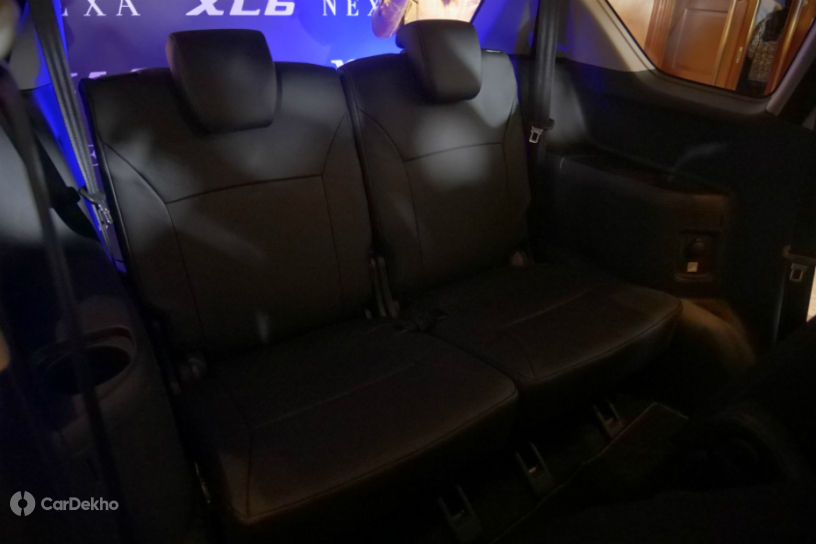 The third row seats also feel more premium with leatherette upholstery and their own cup holders on each side with a power socket on the left side too. These can be split fold 50:50 to open more luggage space if not in use same as the Ertiga. 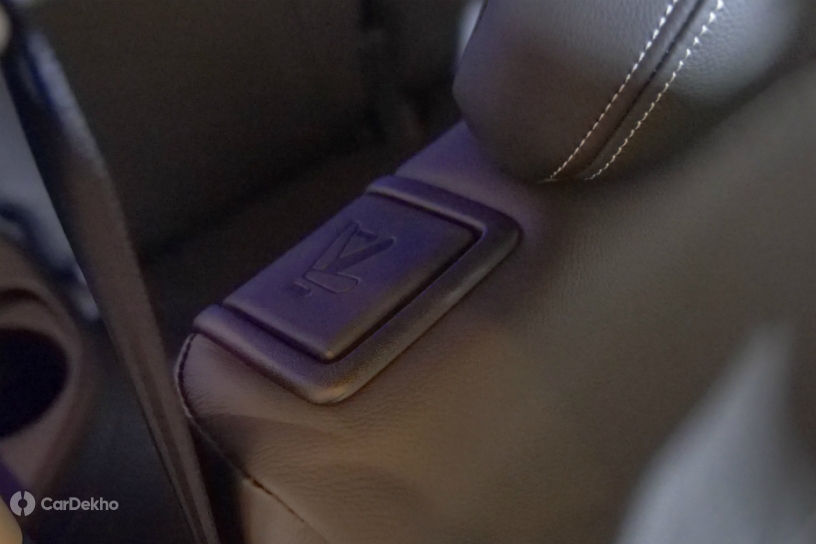 The middle row captain seats feature a single touch recline and slide function to offer access to the third row of seats. 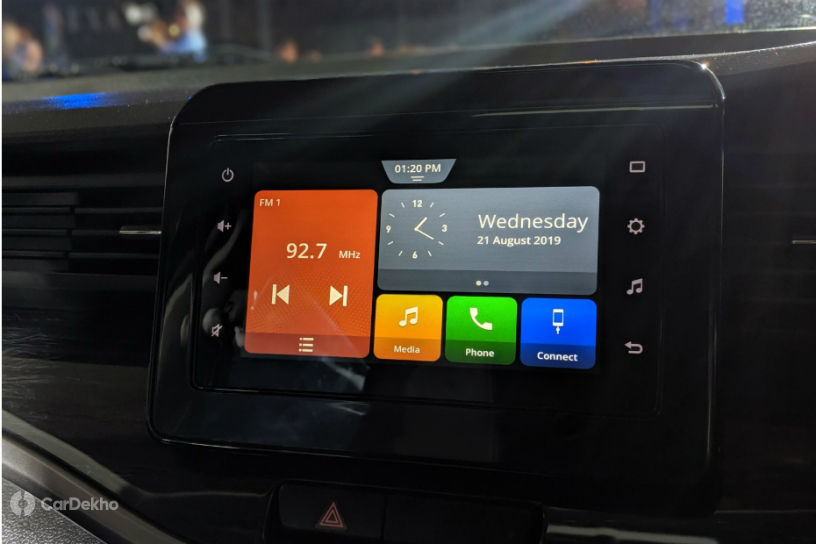 The XL6 is equipped with a 7.0-inch touchscreen infotainment system with gloss black surround mounted in the centre of the dashboard. The Smartplay Studio system features Android Auto and Apple CarPlay compatibility too. 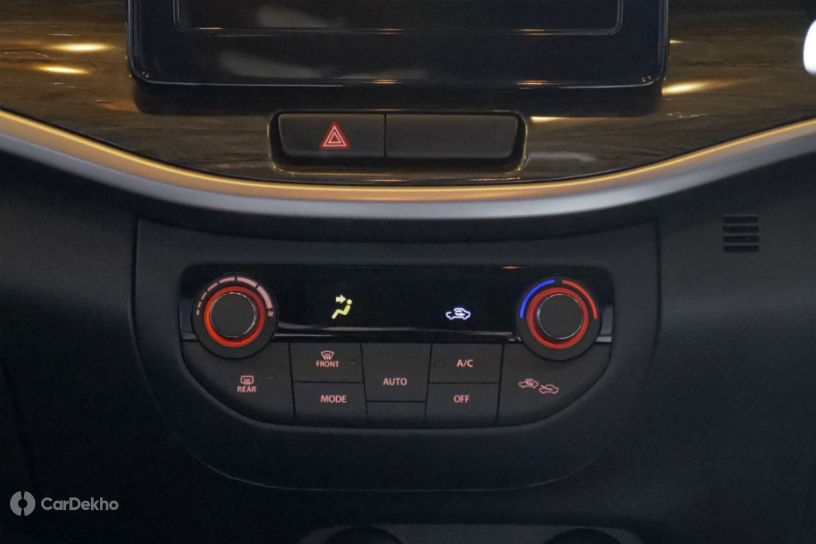 Under the infotainment system, the XL6 also comes with auto climate control with sporty backlighting. 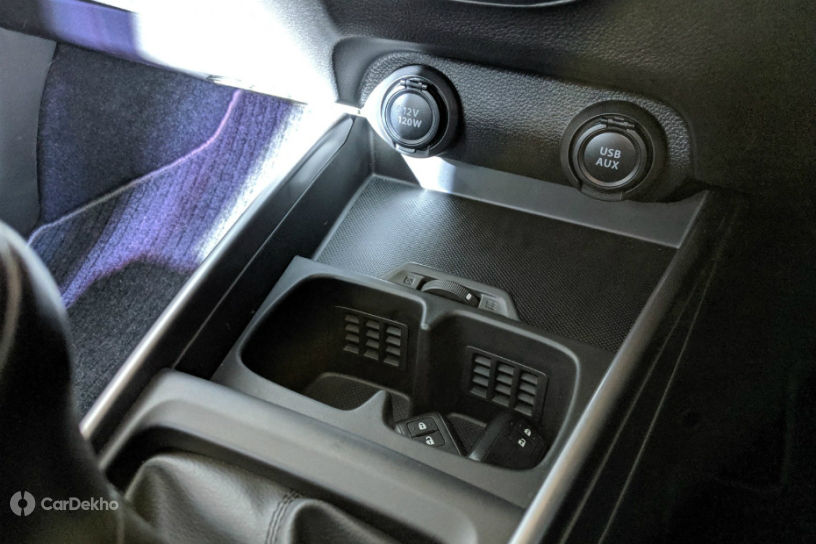 It also comes with cooled cup holders up front with a 12V power socket, USB port and AUX port too same as the Ertiga. 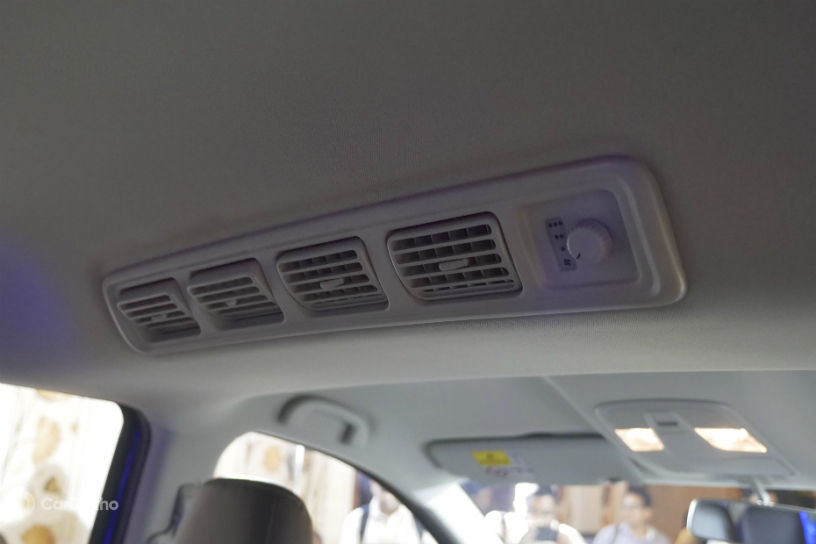 The XL6 also gets independent cooling vents mounted to the roof for the rear rows. 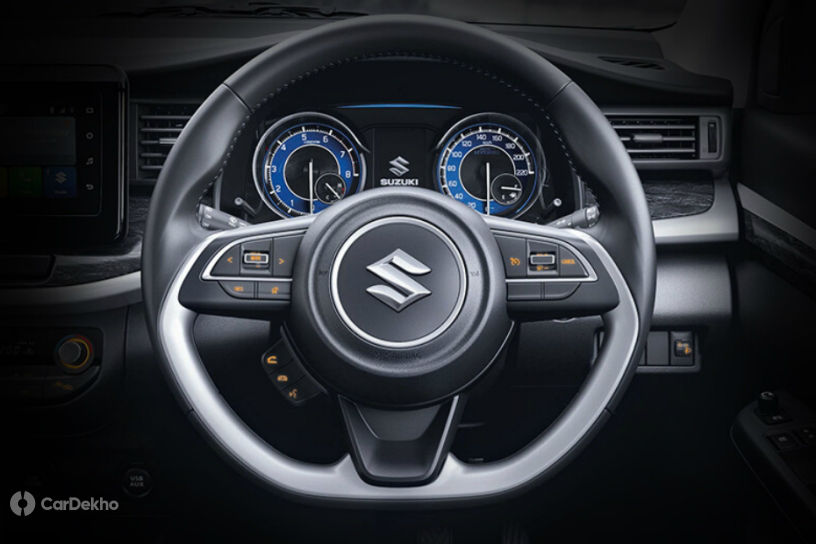 Maruti has also equipped the new XL6 with cruise control unlike the Ertiga. 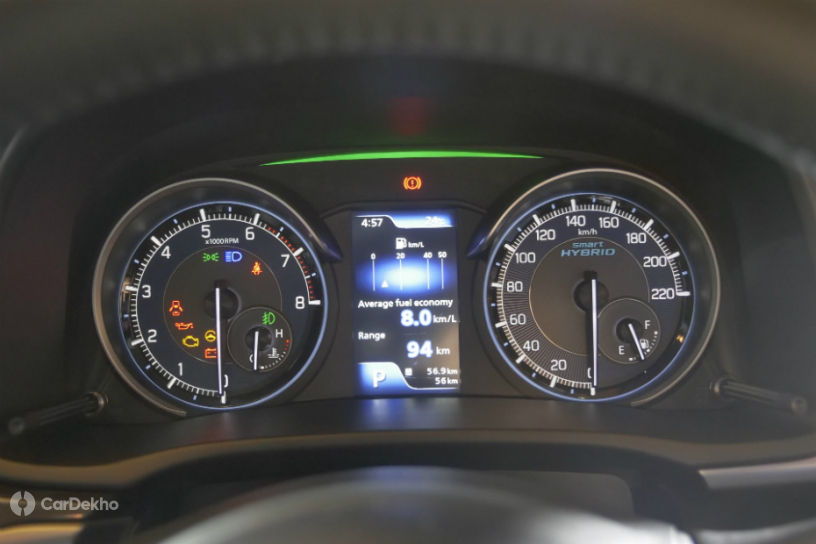 The XL6 gets the same instrument cluster as the Ertiga with a 3.5-inch colour multi-information display between the two analog dials. 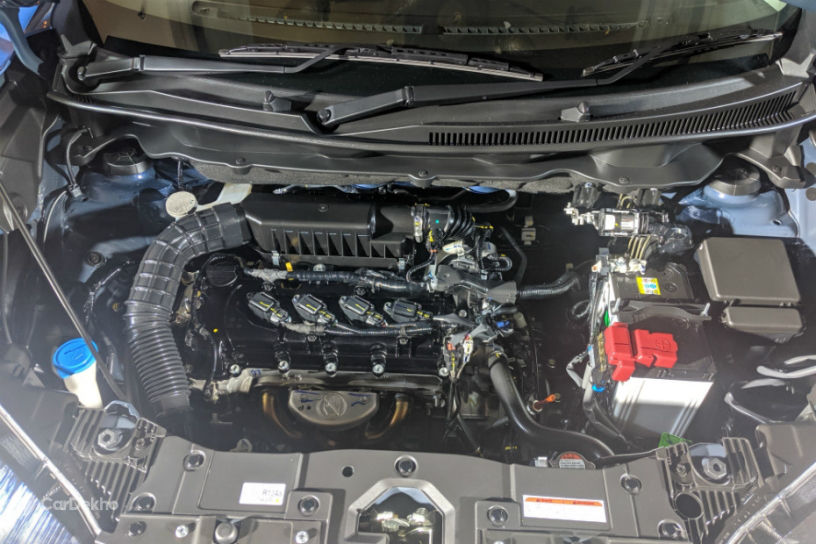 The Maruti XL6 is only offered with a 1.5-litre petrol engine with a mild hybrid system for better fuel efficiency. 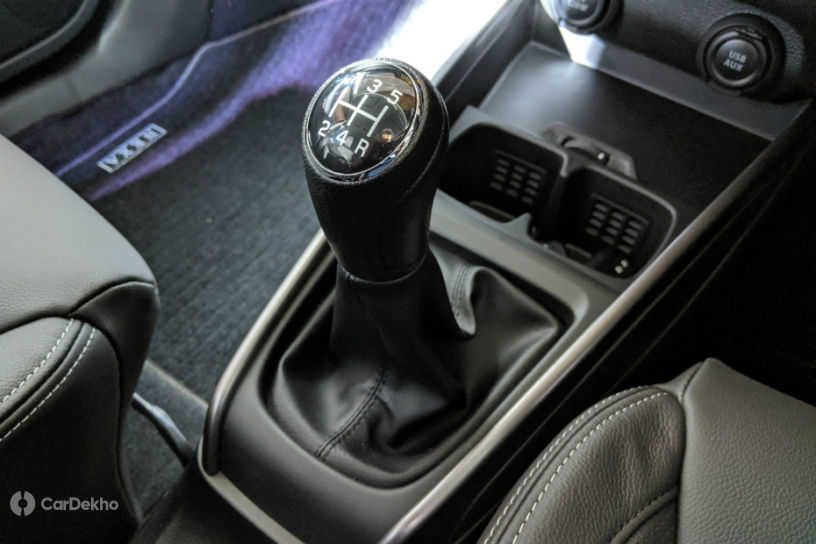 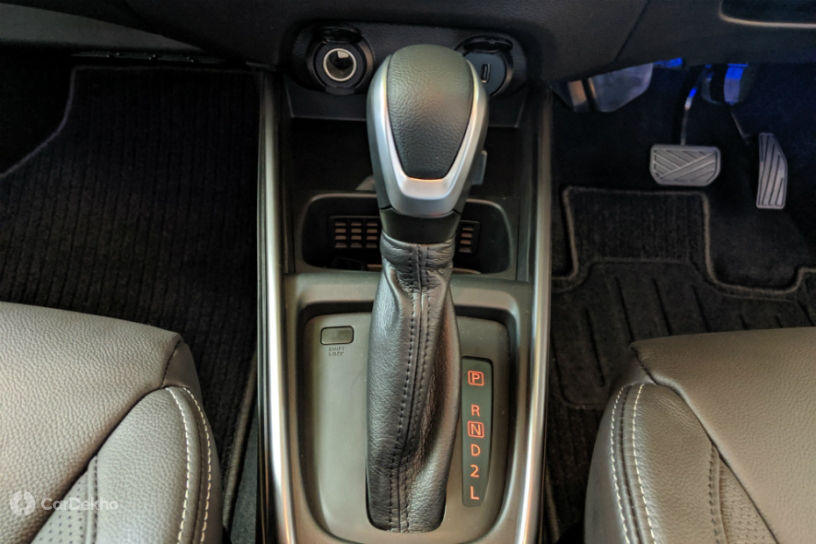 It gets the choice of a 5-speed manual transmission and a 4-speed automatic transmission. 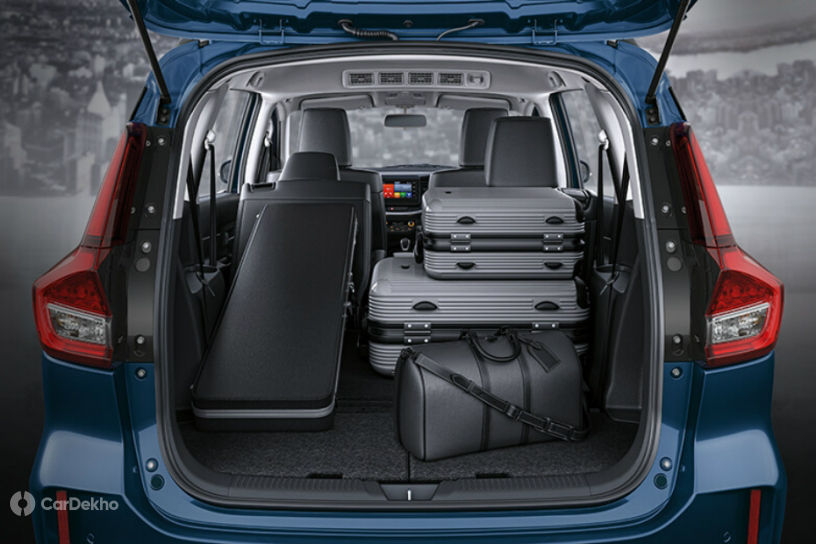 The Maruti XL6 offers 209 litres of boots space with all six seats in use which increases to 550 litres with the third row folded down. If you fold down the second row of seats too, it has a luggage capacity of 692 litres.