MG is about to set its Hector loose in the mid-size SUV segment. But how does it size up against the latest entrant of 2019? We analyze 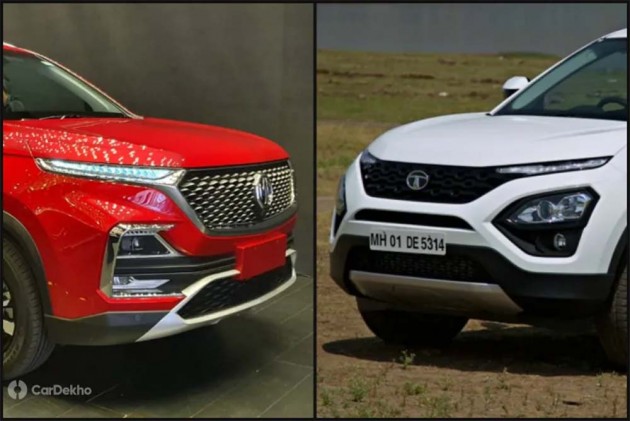 MG Motor has finally unveiled the Hector in India and a quick look at the specs suggests that this SUV is longer and taller than all its segment rivals like the Tata Harrier, Jeep Compass, Mahindra XUV500 and Hyundai Tucson. There’s still about a month left for the Hector’s launch but here’s a pictorial comparison with the Harrier if you’ve been wondering how it looks as against its aggressively priced rival. 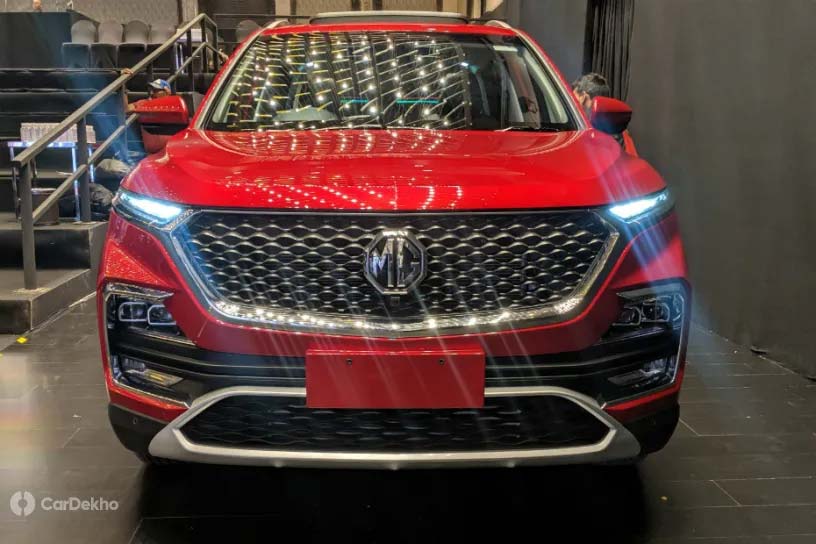 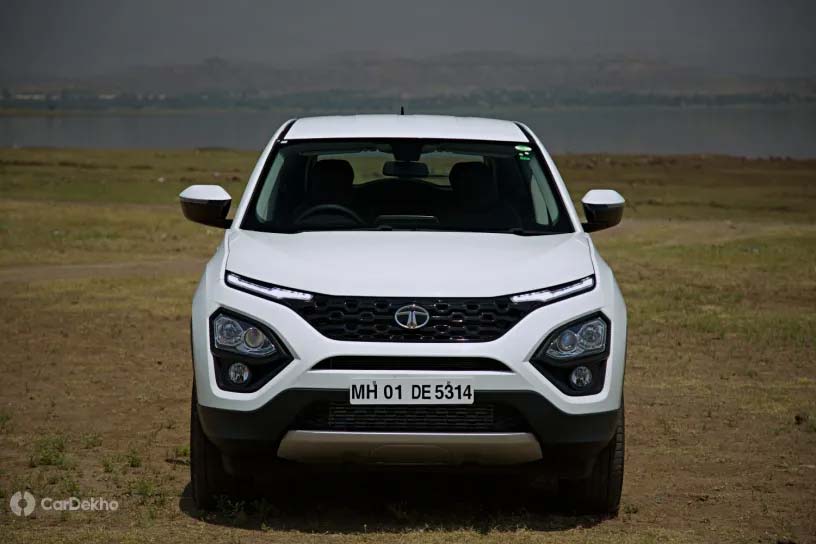 The Hector and the Harrier have similar design elements at the front end though done differently. They both have slim, dual-function LED DRLs just under the bonnet but the Tata doesn’t get dynamic turn indicators. The projector headlamps are fitted lower in the front bumper on both SUVs but the designs are different. While both cars have an imposing presence, the Hector’s large grille with the chrome surround along with the MG badging may appeal to Indians more than the large snout of the Harrier with a gloss black grille. 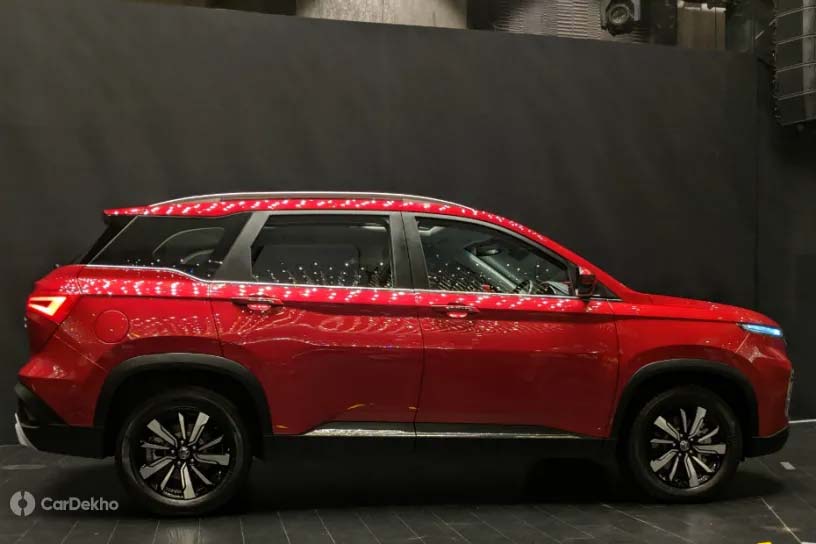 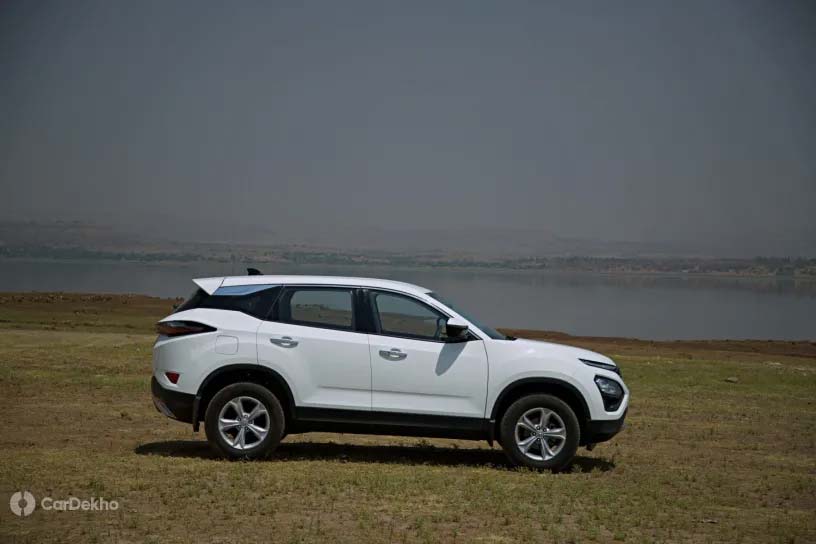 As aforementioned, the MG Hector is longer (+57mm) and taller (+54mm) than the Harrier. From this angle, the difference in proportions is clearly visible. While the Harrier does have more ground clearance (+13mm) both get similar-sized wheels - 16-inch steels and 17-inch alloys. In both cars, the wheels look small, in part due to the large wheel arches. The Hector also gets roof rails as standard and its A-pillar (the pillars at front that support the windshield) is not as steeply raked as the Harrier’s, which gives the MG a more conventional SUV profile. 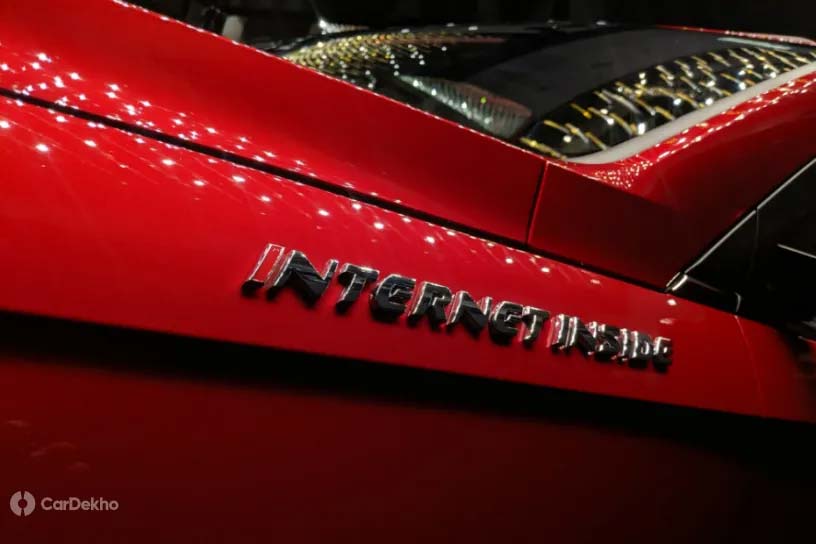 On the right side of the Hector there’s also a badge that says ‘Internet Inside’, which refers to the internet connectivity features of the onboard systems thanks to the eSIM in the infotainment unit. A first in this segment. 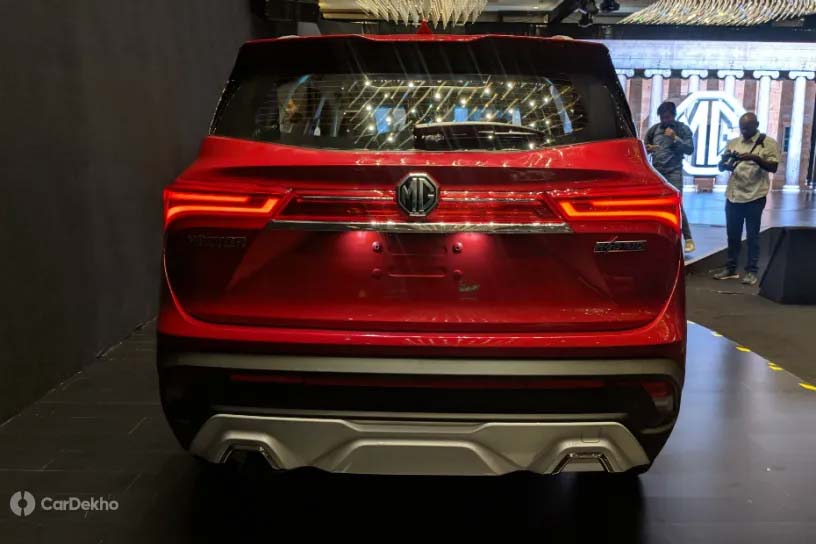 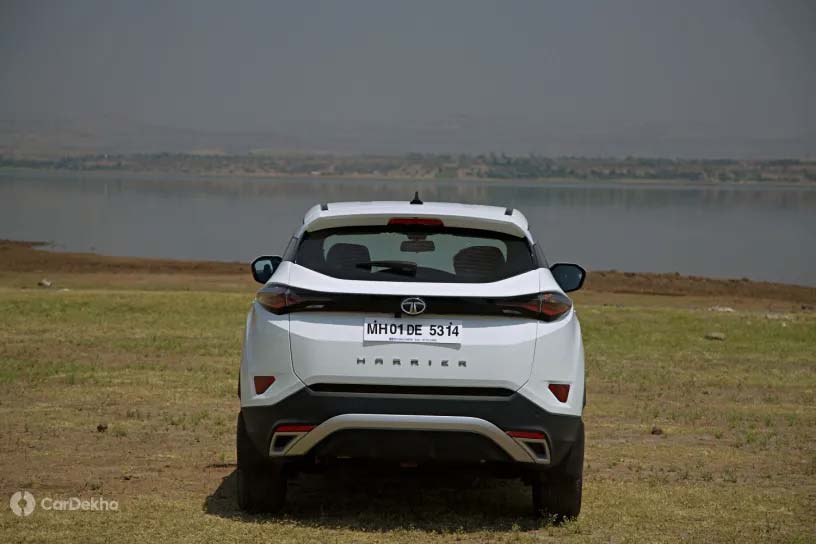 Even around the back, the Hector and Harrier have a similar approach to the LED tail lamp design with the connecting slab in between them. While the MG’s is a red insert, the Tata gets a gloss black insert. The Hector’s rear is boxier than the Harrier which has more noticeable rear haunches that seem to extend outward and away from the boot lid. Whereas the Hector’s powered tailgate spans the entire width of the rear end and doesn’t split the taillamps either. The MG SUV also has a silver cladding under the bumper which seems more premium than the raised end of the Harrier which has black cladding with silver inserts. 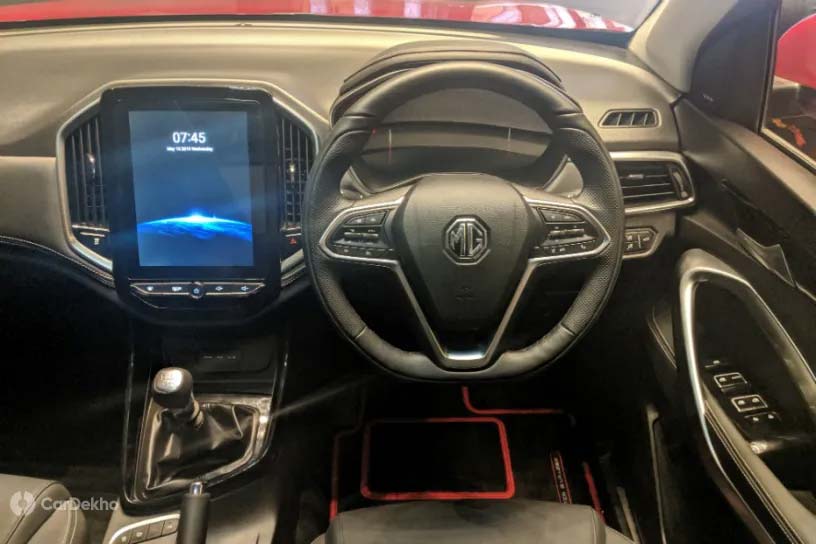 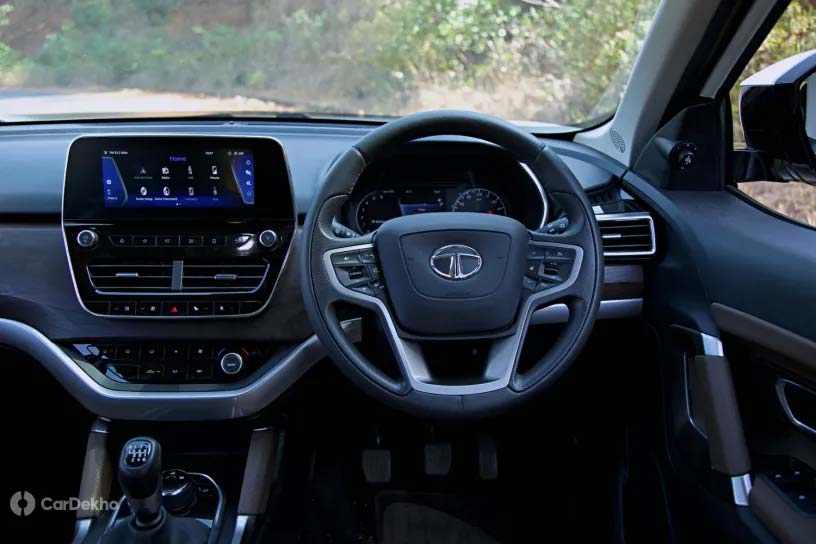 The MG Hector’s dashboard is dominated by the 10.4-inch vertically oriented touchscreen infotainment system, the largest in its segment, flanked by vertical AC vents. Meanwhile, the Tata Harrier’s dash is equipped with a floating 8.8-inch touchscreen display with flat AC vents underneath and the climate controls further below them. The top-spec Harrier’s brown interior with the wood finish appears more premium but the all-black leather interior of the Hector lends it a sportier character. Another distinct feature on the Tata’s central console tunnel is the parking brake lever behind the gear lever while the manual-transmission Hector gets a conventional parking brake lever. 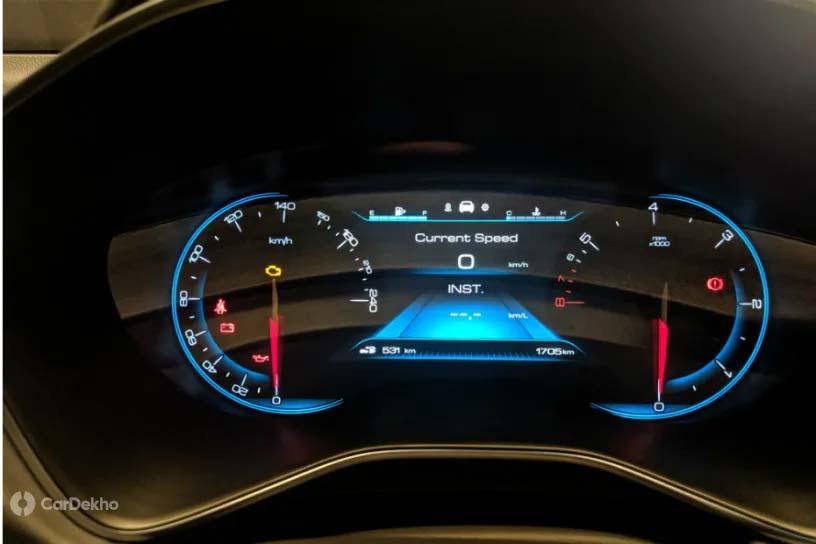 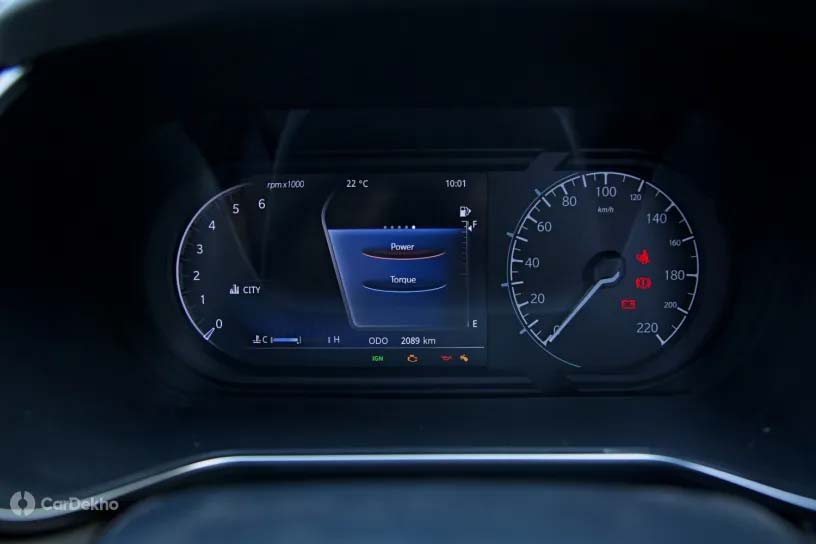 While both cars get a 7-inch MID, the layouts are quite different as you can see above. In fact, the Hector’s tachometer needle moves anti-clockwise. 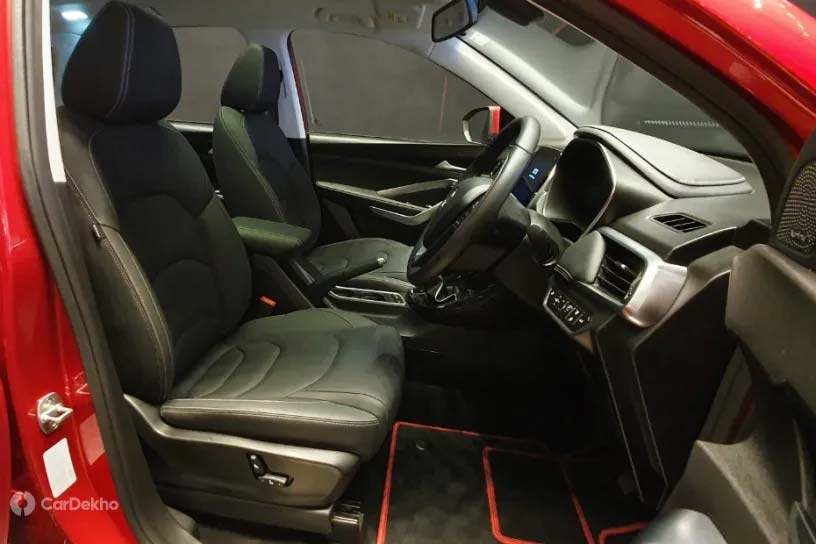 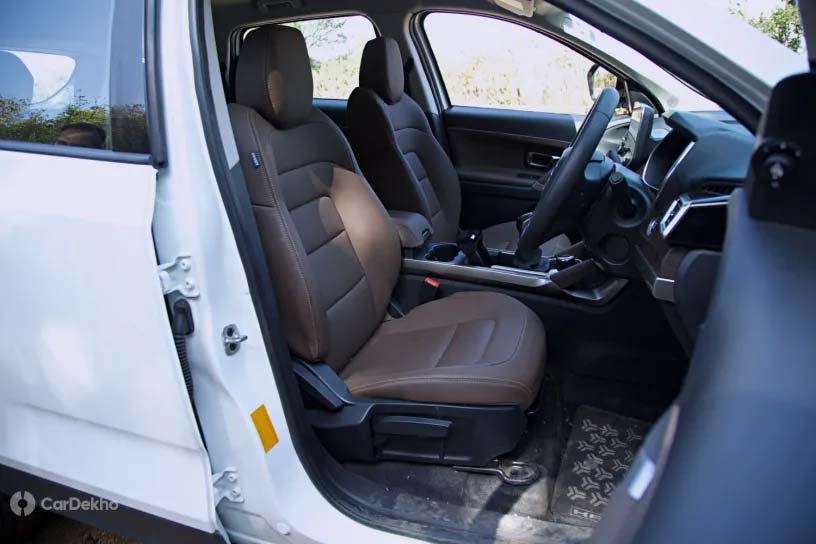 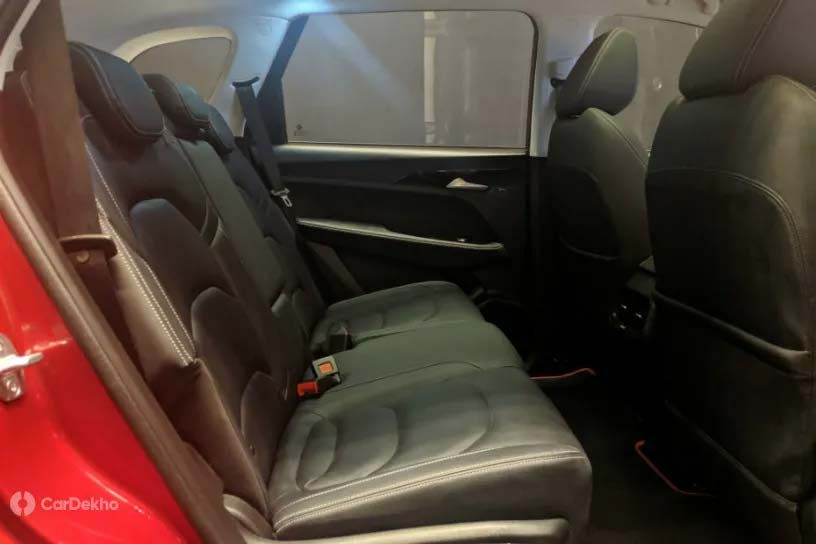 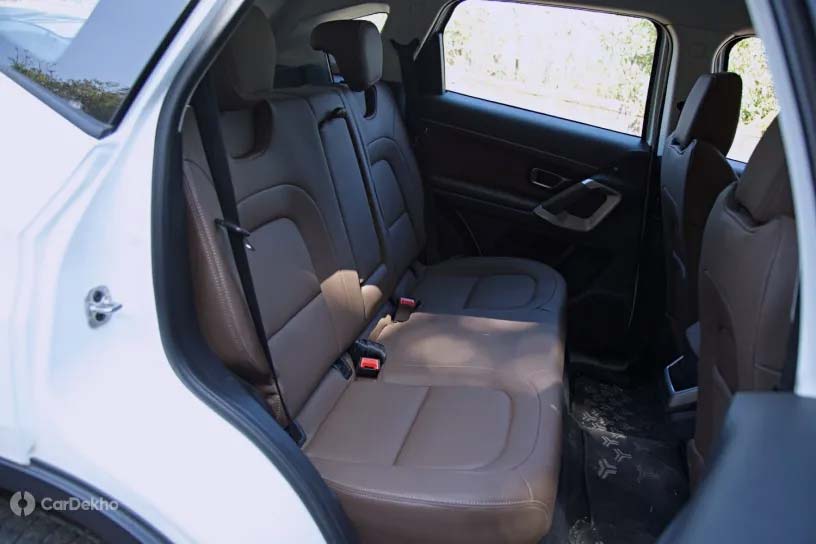 Both these 5-seater SUVs have a similar rear bench with a foldable armrest in the middle and adjustable headrests. However, the Hector gets the additional headrest for the middle passenger as well. What’s not visible is that MG has also made the rear seats reclinable. Floor board is also completely flat in the Hector, unlike the Harrier,  which should add to the middle-row passenger’s comfort. The rear seats of both SUVs can be split-fold 60:40 but on the Harrier it’s not standard. 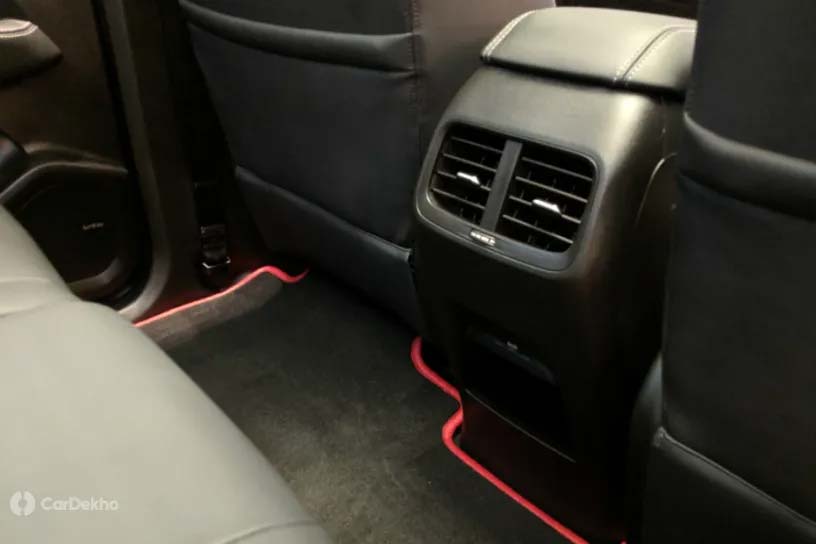 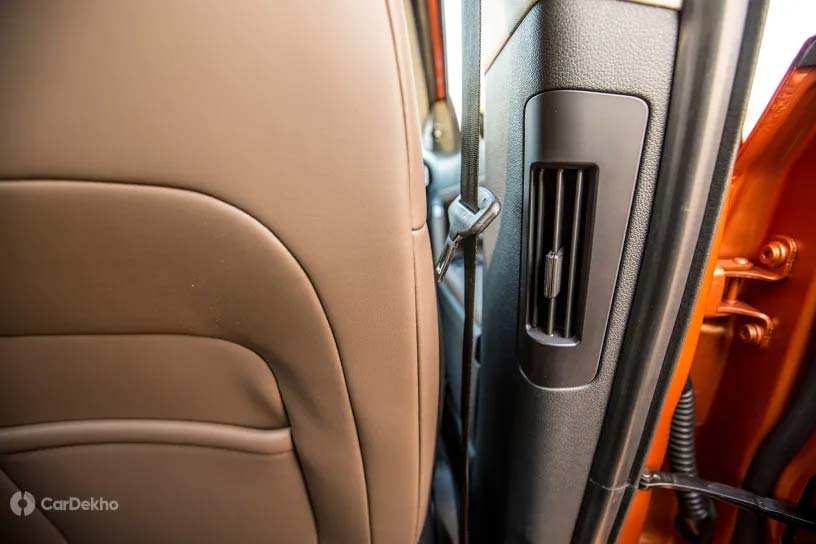 The rear AC vents in the Hector are positioned at the end of the central tunnel while the Harrier’s rear vents are located in the B-pillars. Both still get a rear USB power outlet and small storage space behind the central console tunnel. 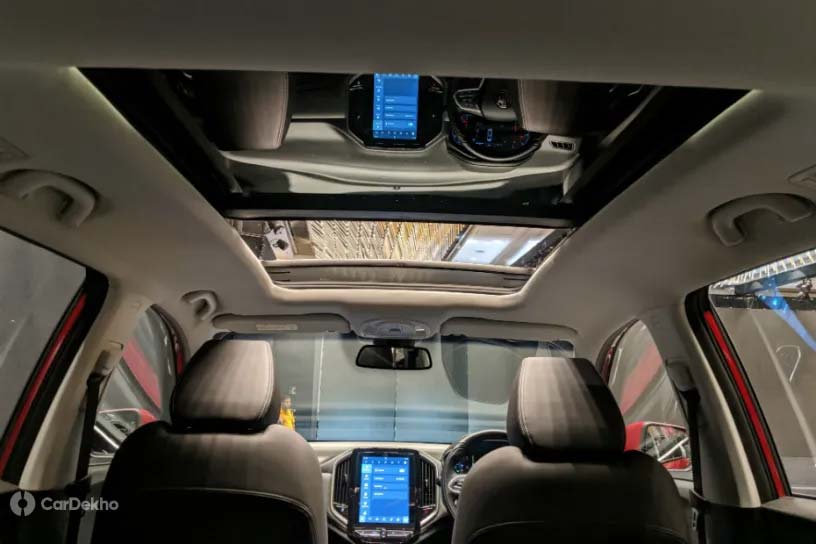 MG has also equipped the Hector with a panoramic sunroof, a segment first, while the Harrier has no sunroof of any kind. 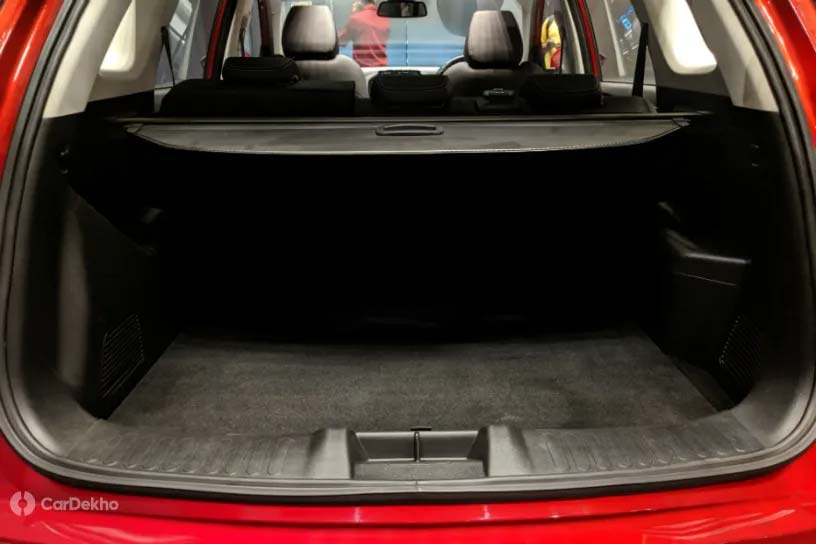 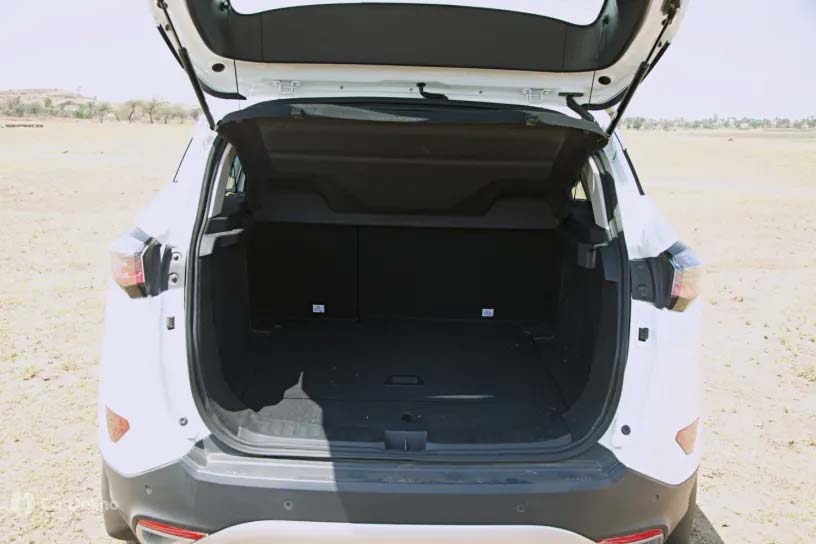 With the rear seats up, the MG Hector claims a segment leading 587 litres of boot space. Meanwhile, the Harrier only offers 425 litres of luggage space. 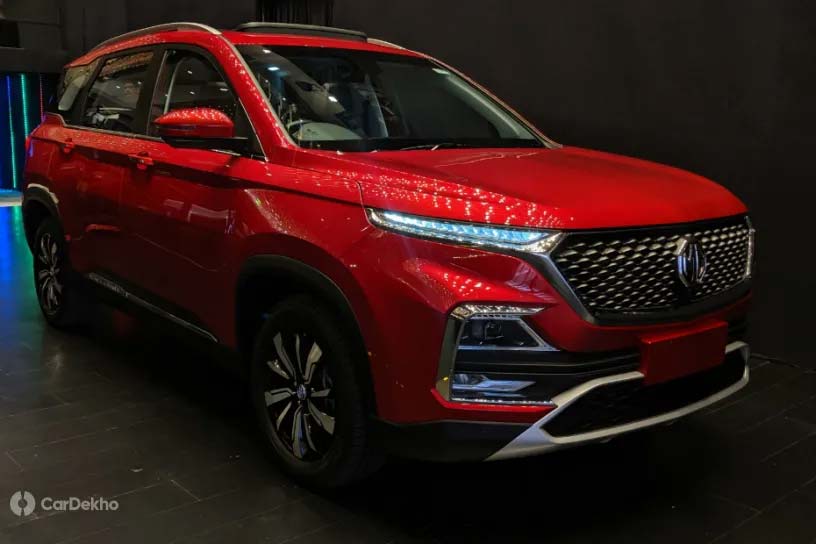 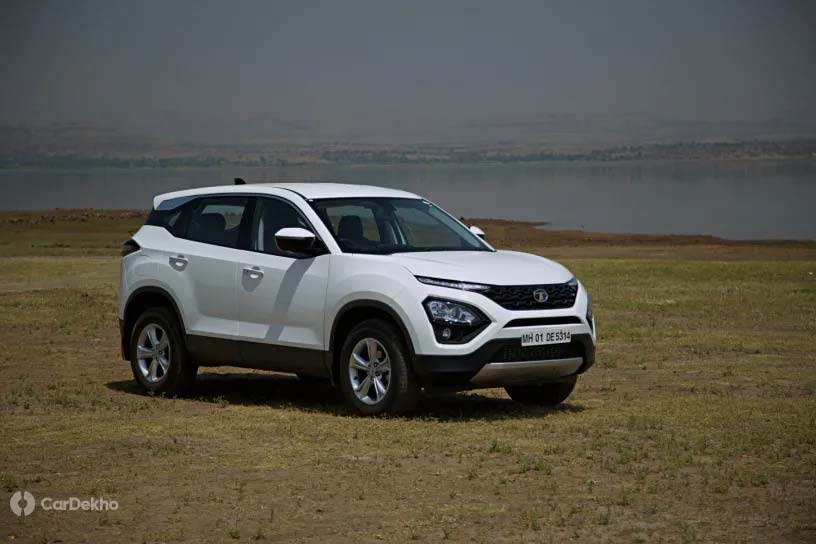 The Hector has a very different profile from the Harrier even though they are both new-age SUVs. Tata’s heavy application of the black cladding at the bottom all around the Harrier makes it more rugged but the silver skid plates and other chrome elements add to the Hector’s premium-ness. Even the 17-inch machined-finish alloys are a much better design than those on the Harrier. 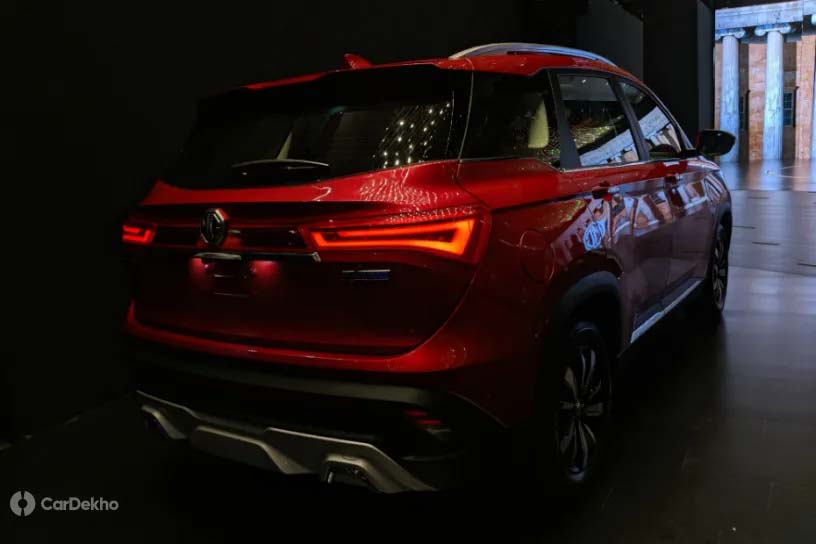 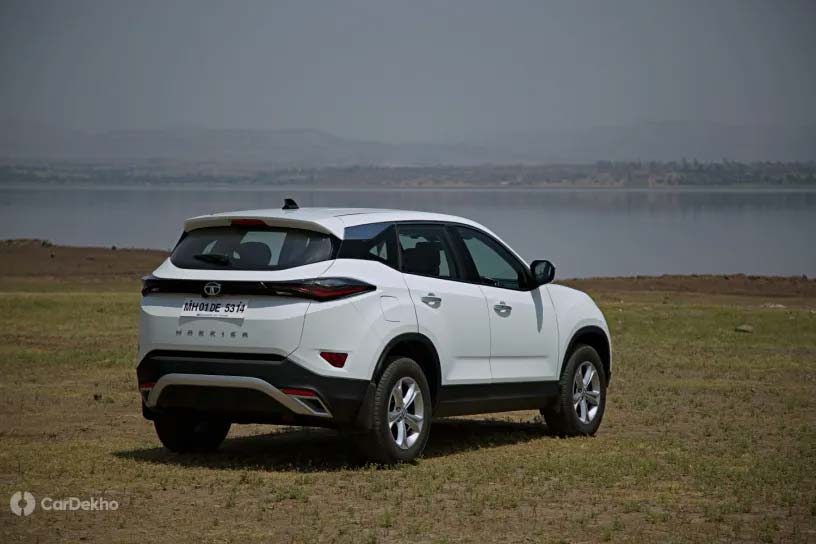 MG Hector’s shoulder line appears to run straight along the sides all the way till the rear wheels and has a taller rear window and rear quarter panel. Meanwhile the Harrier’s shoulder line rises up towards the back for a more sporty and taut profile. Even the rear end of the Tata is raised, which would be handy in off-road situations. Meanwhile, the Hector’s rear end seems to be on the same height as the sides and has a large silver cladding under the black bumpers that also house LED rear fog lamps. Both get blacked out C-pillars, roof spoilers and shark fin antennas but only the Hector gets roof rails as standard.

Overall, both SUVs have a striking design with immense road presence. While the Harrier offers a mix of modern yet rugged appeal, the Hector has a more polished, premium feel to it. Which styling appeals to you better? Let us know in the comments.