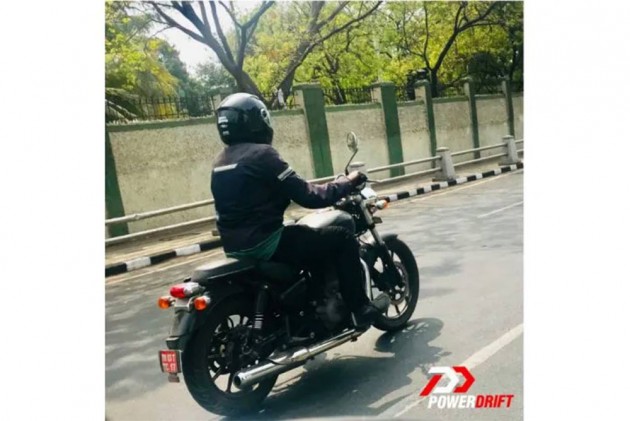 Just a day after the next gen Classic 350 was spotted, yet another Royal Enfield has been spied and from the looks of it, it seems to be the future Thunderbird. The last major update to the Thunderbird came in 2009, with the funky ‘X’ variant breaking cover just last year. The spied motorcycle foresights that the next T’bird could be a mixture of the current standard and X models.

We say this because the split seat, tank and panels are reminiscent of the standard Thunderbird. But then it sports the ergos and alloy rims resembling those of the X. Royal Enfield would be looking to make the next Thunderbird a better city slicker, given the absence of the pillion back-rest. Come 1 April 2020, Royal Enfield would no longer be able to sell the current 346cc UCE motor as it would not pass BSVI emission norms. Thus, a modified version of the Himalayan’s 410 LS makes the most logical direction which Enfield could adopt. This could also make the motorcycle considerably lighter than before, which should aid its manageability factor. A power bump would definitely be welcome.

Changes in mechanical components are unlikely but perhaps new suspension tuning will be in order given the weight change that we figure will take place. It seems early to comment on what could be in store. But given that Enfield is looking to capitalise highly on the neo-retro segment, the launch of the Interceptor and Bullet Trials signalling the intent, we could see the Thunderbird retaining some of that old-school charm.

We figure Royal Enfield would make another big splash right before the 2020 Auto Expo, similar to what they did with the Himalayan back in 2016.