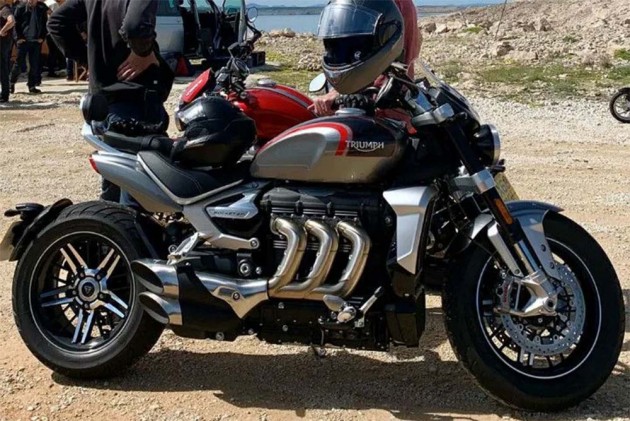 Triumph has been testing its monster of a motorcycle, the Rocket 3, for quite some time now. Until now, a bunch of spy images have been revealed and a lot of information about the power cruiser is already out there on the internet. However, the new set of images give us an insight into the new GT variant, which implies that Triumph is likely to bring a toned down version too. Behind the tourer, there’s also a red motorcycle which appears to be a performance-focused variant of the Rocket 3.

Being a touring-biased motorcycle, the Rocket 3 GT gets a small windscreen, a pillion seat, a backrest and a taller and wide handlebar. It also features a new dual-tone silver/black paint option. As per the images, the performance-oriented Rocket 3 gets a shorter and wider handlebar compared to the touring variant, which appears to be similar to the Rocket 3 TFC. Technical information about both these motorcycles is limited as of now. However, these motorcycles are likely to be powered by the same engine as the Rocket 3 TFC: a 2500cc, water-cooled inline three-cylinder motor. This gigantic engine produces 170PS and a colossal 221Nm of torque. Just to put things into perspective, the Maruti Suzuki Brezza ZDI Plus produces 200Nm of torque!

The Rocket 3 TFC which was unveiled a few days back has a price tag of £25,000 (on road), which translates to Rs 22.54 lakh (excluding Indian taxes and duties). However, the variants which have been spotted now are likely to be a lot more affordable than the limited-edition model.

The Rocket 3 GT looks production-ready, so chances are that Triumph will unveil it at the 2019 EICMA Motor Show. Expect it to come to our shores in 2020.