Revising What I Learnt To Forget With TVS Racing

Spending a day at the track, under watchful guidance of pros does wonders to your riding technique 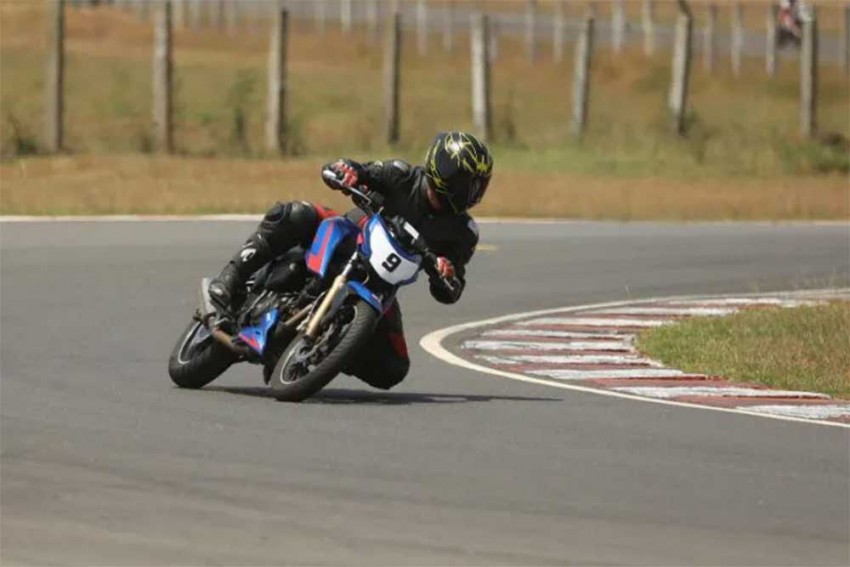 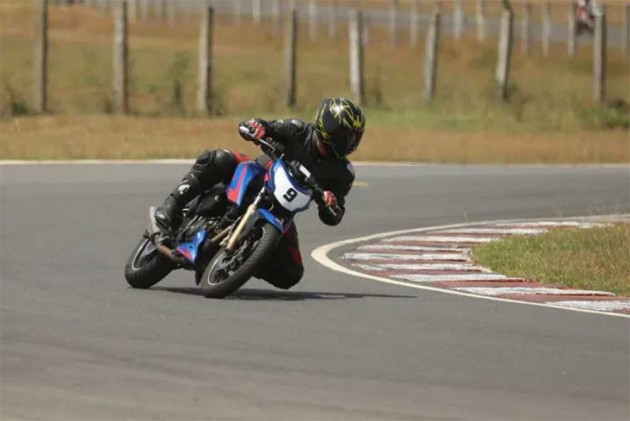 After being cooked to a medium rare in the blistering Chennai heat, all 19 of us auto media folk were packed into the small media centre of the MMRT. It was just after lunch. TVS Racing’s Harry Sylvester was explaining what gears to take every single one of the twelve corners of the 3.74km track in. “First corner is flat out in fifth gear,” he announced. I heard a few gasps. This was exactly the same feeling I had three years ago when I got a small taste of the MMRT. I unlearnt a lot of mistakes in my riding back then. However, with limited track time, the errors crept in yet again. Thankfully, TVS Racing came to my aid this time around. Here’s what panned over the course of half a day.

It is no secret that TVS boasts of a rich racing pedigree which spans over 36 years. With umpteen national titles as well as international accolades to their name, TVS Racing have invested a lot of resources into unearthing and nurturing talent. To give us a small taste of the same experience, they first called us three years ago for a small media race. The following year, things were taken up a significant notch with the first edition of the TVS Young Media Racer Program. Not to toot our own horn, but our representative, Amar Katkar, made us proud by consistently bagging top three results. 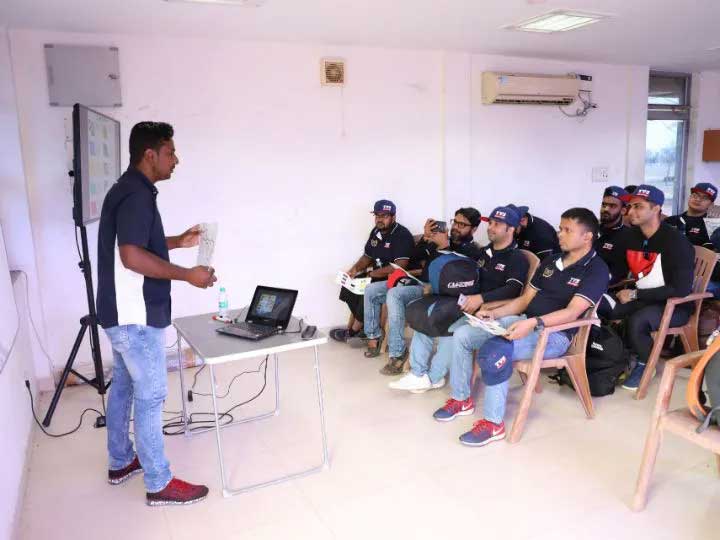 2019 marks the start of the third edition of the YMRP where in we race the race-prepped Apache RTR 200 4V Race Edition 2.0. But before we actually get to racing there is training - not only about how to ride on the track, but also about racecraft. The brilliant teaching faculty comprising of H K Pradeep (former 8-time national off road champion), Harry and TVS’ current factory riders - K Y Ahmed and reigning national road racing champion, Jagan Kumar. The curriculum has not changed much from the first year when Amar undertook the same training. 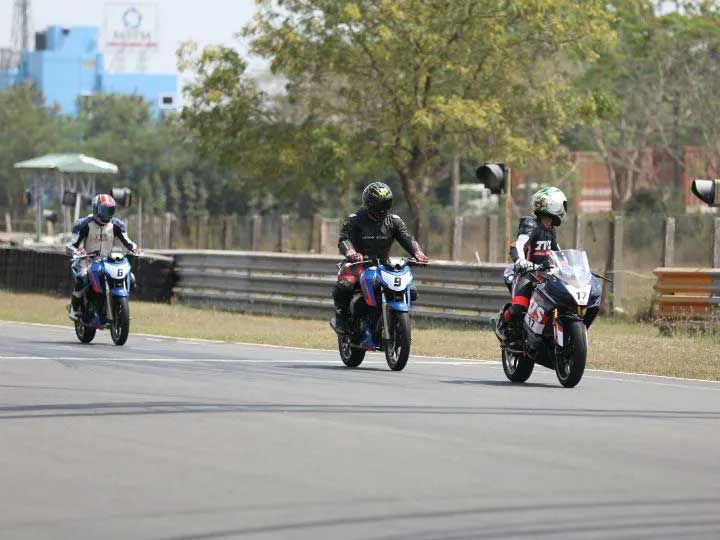 Track riding is a great leveller of how fast you actually are. There is much more to it than just going around fast in circles. And paying heed to what your instructors are trying to say is the first step. It was difficult for me initially to adapt to the instructions as it is contrary to the wrong riding habits picked up over years, without any formal training. I was able to get rid of a majority of ill though, thanks to good teachers and experienced peers. But as I mentioned previously, I had not been to a racetrack for a while. And in the meantime, I was bitten by the adventure bug. Hence, body posture and braking technique both needed correction. 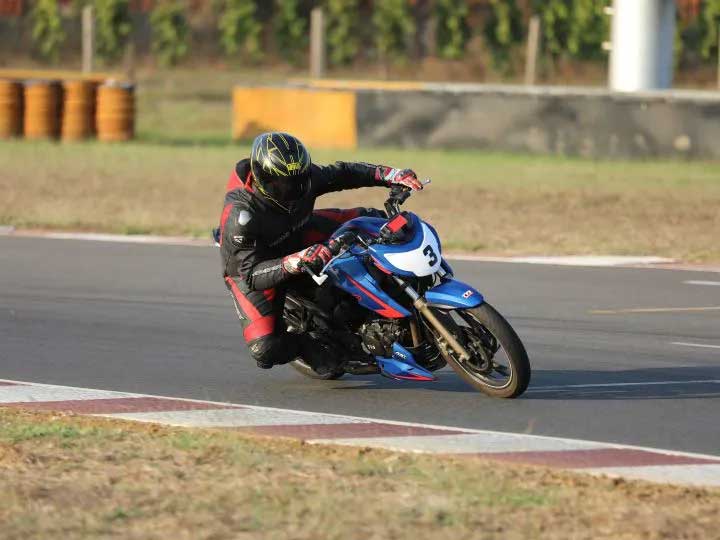 It was extremely crucial to refresh my markers once again. Thankfully, the no braking session was just the cure for that. With pace dialled down, it was easy to get comfortable with the lines, look out for track hazards and know where the track was resurfaced, especially C1. Even though the entire track had been resurfaced a couple of years back, due to car racing, the fast corners had several bumps to negotiate. Basically, the session was spent in looking as far ahead as possible as we all know the adage, “Your bike goes where you look.”

With Harry’s coaching in the classroom followed by trailing Ahmed on the track, I was getting the hang of it. With every lap, my confidence grew. Harry constantly kept reminding us to brake, slide our butts off for the upcoming corner, get off the brakes and then turn in. And all of this should take half the time it took you to read the above sentence. More so, it should be a smooth process, one motion flowing seamlessly into the other. 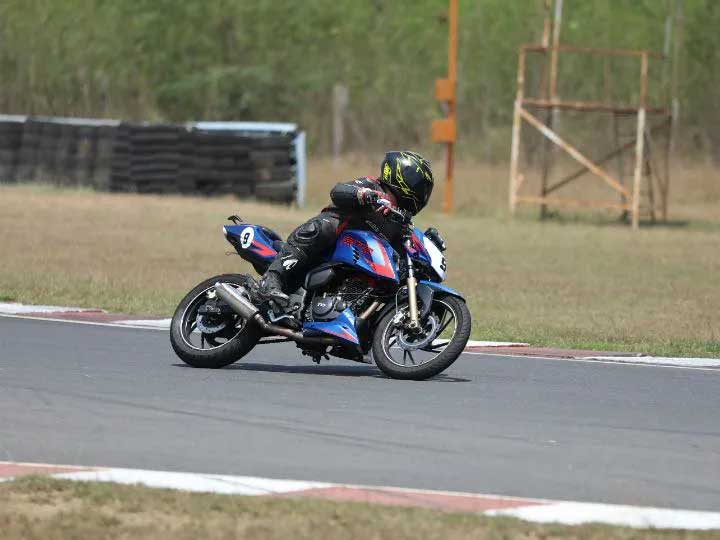 Braking, rather late braking has always been my weakness. I have struggled with the action of bite into progression, which should be seamless. Now, even though the extra drag that my huge torso offers did help me slow down drastically, I struggled with the progression bit of the process. Jagan saw me struggle and adviced, “Look further ahead and just brake one or two metres earlier.” Apparently, I was becoming a bit conscious of my braking frailties, distracting me from where I should be looking. 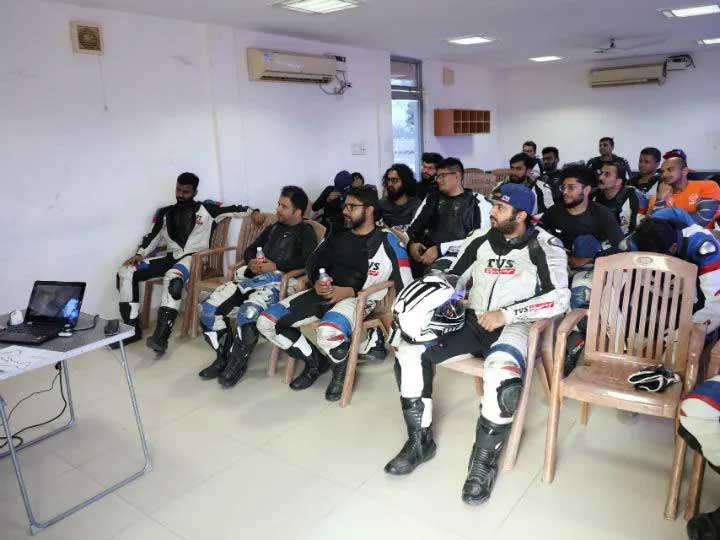 Only 15 of us would make the grid for the main event and that meant selection time. However, that was to come after a 20-minute practice session where they let us lose. With the MMRT and the Apache 200 to ourselves, each one of us tried to implement whatever we had learnt and improve our timings. There was only time for us to set three fast timed laps during our qualifying session. As all of us were divided into batches of three, I awaited my turn as I was drawn right at the end. The heat was beginning to affect most of us and I feared running out of steam when my time arrived. 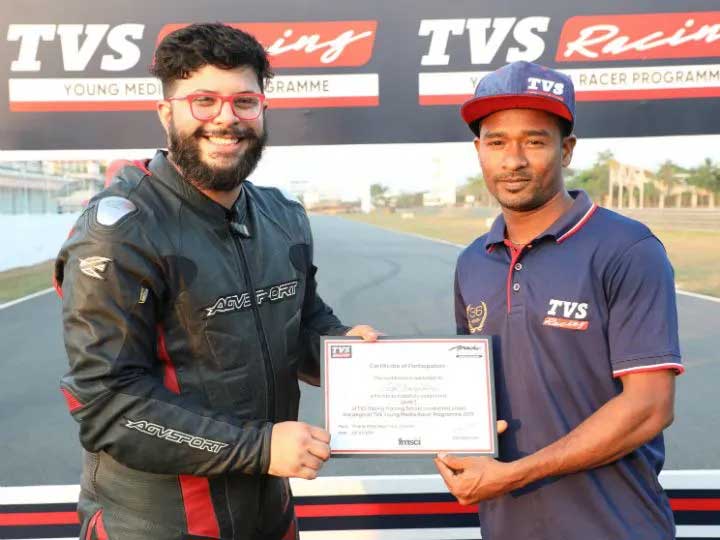 Gladly, that was not the case as not only did yours truly qualify and became eligible to race in the upcoming season, but also bagged the fastest lap of the weekend. Yes, the pot-bellied rider set the quickest time over the course of the day.

The first round of our series takes place in June at the Kari Motor Speedway in Coimbatore. There has been a banter going around Instagram (follow Powerdrift’s Varun Painter and News18’s Manav Sinha) with my fellow participants where each one of the fast boys are already preparing our excuses in case we don’t win. Well, I guess we are becoming racers after all!