Skoda will launch a made-for-India compact SUV in 2020. It is expected to borrow the Kamiq’s styling and name 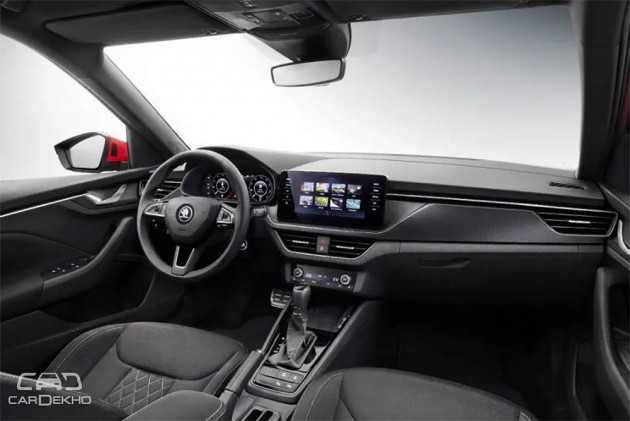 Skoda has slowly been dropping details of its upcoming compact SUV, the Kamiq, ahead of its public premiere at the 2019 Geneva Motor Show in March. Now the Czech automaker has unveiled the interior of the Kamiq. The overall layout of the Kamiq’s interior is identical to its concept’s, the 2018 VisionX (pictured above). It is also identical to the Scala’s, Skoda’s flagship hatchback based on the same MQB A0 platform. Skoda highlighted last year that “The interiors of our VISION X and VISION RS (Scala’s) concept studies are a realistic demonstration of the future of ŠKODA’s new interior design language”.  Hence, expect cabins of Skoda’s future models like the next-gen Octavia to be inspired by the one you see in the pictures.

Taking centre stage in the cabin is a free-floating infotainment system. The Kamiq will offer up to an 8-inch unit, same as other MQB A0-based cars like the next-gen Volkswagen Polo and the T-Cross compact SUV. Likewise, it will also offer VW Group’s 10.25-inch fully digital instrument cluster. Beside its cabin, Skoda has revealed the wheelbase and boot space of the Kamiq as well. The Skoda Kamiq will only be available in a single wheelbase option unlike its Volkswagen counterpart, the T-Cross, which will be available in two sizes. While the Euro-spec VW SUV has a smaller wheelbase (same as the new Polo), the Brazil- and China-spec SUVs offer a wheelbase identical to the Virtus sedan (next-gen Vento). The wheelbase of the Kamiq is the same as the bigger T-Cross, at 2,651mm. Boot volume of the Kamiq is 400 litres and it increases to 1,395 litres with the rear seat backrests folded down. Surprisingly, it doesn’t get an expandable boot like the VW T-Cross, which gets a sliding rear seat. We expect the upcoming India-spec Skoda SUV to be similar to the Kamiq in terms of its interior design. Expect the exterior to be on the same lines too. However, there is a possibility of minor cosmetic & feature tweaks. In India, it will go up against the Hyundai Creta, Nissan Kicks, Renault Duster & Renault Captur when it launches in 2020.