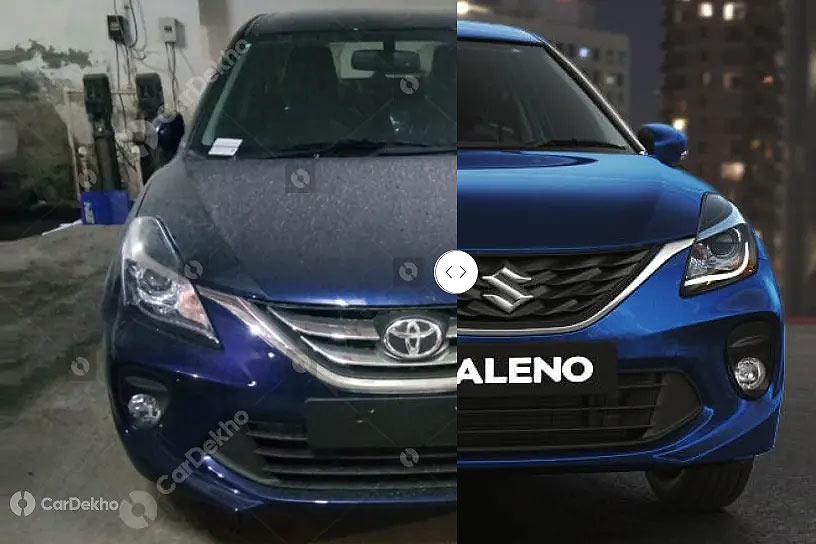 Toyota will launch its version of the Maruti Baleno, the Glanza, soon.

Toyota is set to launch the Glanza in a few weeks from now, and while the carmaker has already rolled out a teaser video of the Baleno-based hatchback, it has now been spied completely undisguised for the first time. The Glanza’s production started some time back and dispatches to dealers have also begun. Toyota will be selling the Glanza from its own dealerships and will also offer service support to the hatchback, like it does for all Toyota models. The Toyota Glanza is a rebadged Baleno and apart from a different front grille, both the Glanza and the Baleno facelift look the same. We would have liked to see a different-looking front bumper, to say the least, on the Glanza, in order to set it apart from the Baleno in terms of looks. As far as equipment is concerned, the Glanza has been spotted in the (possibly) top V variant and it sports projector headlamps, which are probably lit by LEDs, like on the Baleno. The Glanza in the image also gets fog lamps, like the Baleno. Toyota and Maruti have taken badge engineering literally and that would be a disappointment for a lot of Toyota fans. The spy shot of the rear of the Glanza reveals that apart from the badges, there’s nothing that separates it from the Baleno. It’s got the same set of tail lamps, the same chrome treatment on the boot and exactly the same rear bumper. Official Toyota teaser video has already revealed that even the alloy wheel design will be the same. The spy image reveals that the Glanza will be available in the same blue exterior colour as the Baleno. The official video confirms red exterior colour on offer as well, which can also be opted for in the Baleno too.

The Glanza is the first of the cars from the Toyota-Suzuki agreement and more will follow. Given how similar the Glanza is to the Baleno, our excitement levels for further Toyota models based on Suzuki cars have dropped to zero, to say the least. As far as equipment levels are concerned, the Glanza will share most of the equipment with the Baleno. The spy image of the rear of the Glanza reveals a reverse parking camera on the chrome bar at the rear, which suggests that the Glanza V is based on the top-spec Baleno Alpha, which is the only Baleno variant that gets a reverse parking camera. We’ll get a better idea about which Baleno variant the Glanza is based on once Toyota reveals its variant-wise features list.

In terms of pricing, we expect Toyota to price the Glanza at a premium over the Baleno. The Baleno is available with the DualJet engine in Delta and Zeta variants with a manual transmission. These variants are priced at Rs 7.25 lakh and 7.86 lakh (ex-showroom Delhi), respectively.