On May 2, violence broke out at the AMU campus as the row over a Muhammad Ali Jinnah portrait on the campus triggered a right-wing protest. 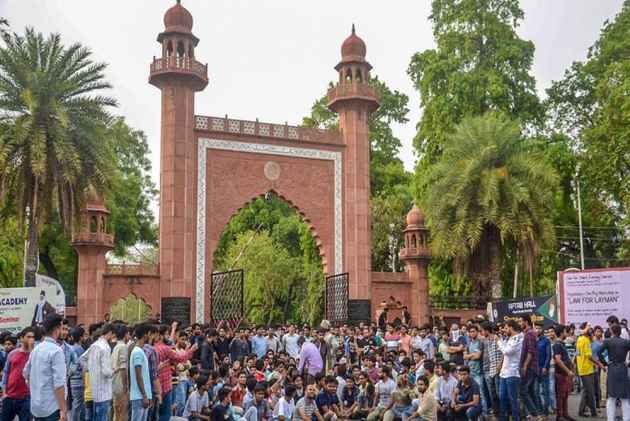 Even as the indefinite dharna and boycott of academic activities by students in Aligarh Muslim University (AMU) continued, a video of protesting students shouting slogans of "Azadi", apparently against right-wing groups, went viral on social media.

AMU PRO professor Shafey Kidwai said: "Students were on an indefinite protest at the Bab-e-Syed gate of the university, and were raising the slogan - Bhagwa Rang aur Aatank se Azadi. These are not anti-India slogans, and do not relate to the unity, integrity and sovereignty of India."

He added: "The students are protesting, so that the police and administration act against the so-called Hindu organisations, which had given provocative speeches and raised highly objectionable slogans. A case was also registered in this context."

Kidwai said the students were holding protests in a democratic manner and had three demands.

"The university administration is talking to them. But, when the district administration speaks to them, only then a way-out will be possible," he said.

On May 2, violence broke out at the AMU campus as the row over a Muhammad Ali Jinnah portrait on the campus triggered a right-wing protest.

A function to grant life membership of the student union to former vice president Hamid Ansari was called off and he returned to Delhi.

The AMU students alleged that the protesters were from Hindu Yuva Vahini, and were allowed to leave a police station after being initially detained.