No tsunami arrived and there were no immediate reports of deaths or serious injuries. 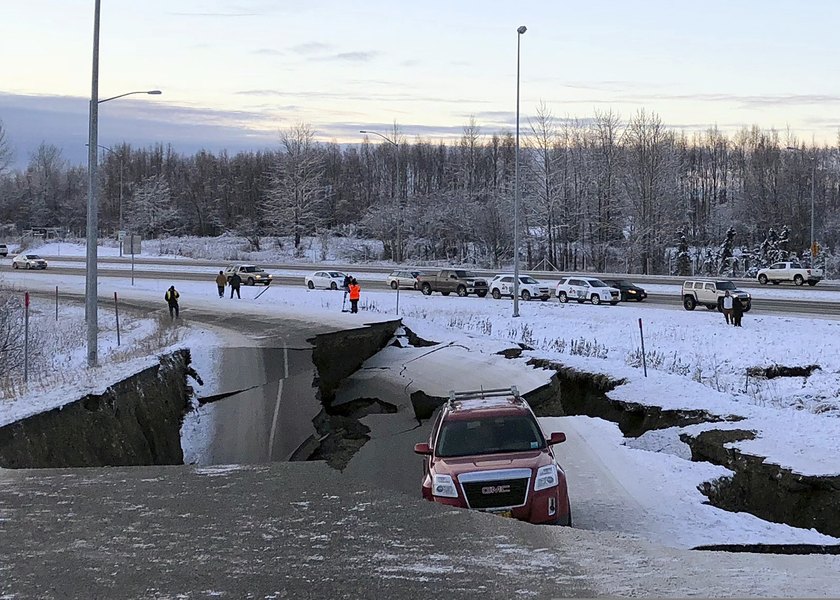 Back-to-back earthquakes measuring 7.0 and 5.7 shattered highways and rocked buildings Friday in Anchorage and the surrounding area, sending people running into the streets and briefly triggering a tsunami warning for islands and coastal areas south of the city.

No tsunami arrived and there were no immediate reports of deaths or serious injuries.

The US Geological Survey said the first and more powerful quake was centred about 12 kilometres north of Anchorage, Alaska's largest city, with a population of about 300,000. People ran from their offices or took cover under desks. The 5.7 aftershocks arrived within minutes, followed by a series of smaller quakes.

"We just hung onto each other. You couldn't even stand," said Sheila Bailey, who was working at a high school cafeteria in Palmer when the quake struck. "It sounded and felt like the school was breaking apart."

A large section of an off-ramp near the Anchorage airport collapsed, marooning a car on a narrow island of pavement surrounded by deep chasms in the concrete. Several cars crashed at a major intersection in Wasilla, north of Anchorage, during the shaking.

Anchorage Police Chief Justin Doll said he had been told that parts of Glenn Highway, a scenic route that runs northeast out of the city past farms, mountains and glaciers, had "completely disappeared."

Traffic in the three lanes heading out of the city was bumper-to-bumper and all but stopped Friday afternoon as emergency vehicles passed on the shoulder.

Flights at the airport were suspended for hours after the quake knocked out telephones and forced the evacuation of the control tower. And the 800-mile Alaska oil pipeline was shut down while crews were sent to inspect it for damage.

Anchorage's school system cancelled classes and asked parents to pick up their children while it examined buildings for gas leaks or other damage.

Gov. Bill Walker issued a disaster declaration. He was in an elevator in a high-rise Anchorage office building and said it was a "rough ride" coming down. He described the quake as a 7.2, though it was unclear why his figure differed from that of the USGS.

Walker says it will take more than a week or two to repair roads damaged by the earthquake.

"This is much more significant than that," he told reporters at a news conference.

Walker leaves office on Monday, and he said members of Gov.-elect Mike Dunleavy's staff had been involved with the earthquake response to ensure a smooth transition.

"This isn't a time to do anything other than taking care of Alaskans, and that's what we're doing," he said.

Alaska was the site of the most powerful earthquake ever recorded in the US. The 9.2-magnitude quake on March 27, 1964, was centred about 120 kilometres east of Anchorage. It and the tsunami it triggered claimed about 130 lives.

The state averages 40,000 earthquakes a year, with more large quakes than the 49 other states combined. Southern Alaska has a high risk of earthquakes because the Earth's plates slide past each other under the region.

Alaska has been hit by a number of powerful quakes over 7.0 in recent decades, including a 7.9 last January southeast of Kodiak Island. But it is rare for a quake this big to strike so close to such a heavily populated area.