The film starts with a disclaimer that it does not endorse dowry, but there will be many amidst its target audience, who will not be converted by the film’s message, but you can’t blame the filmmaker for trying. 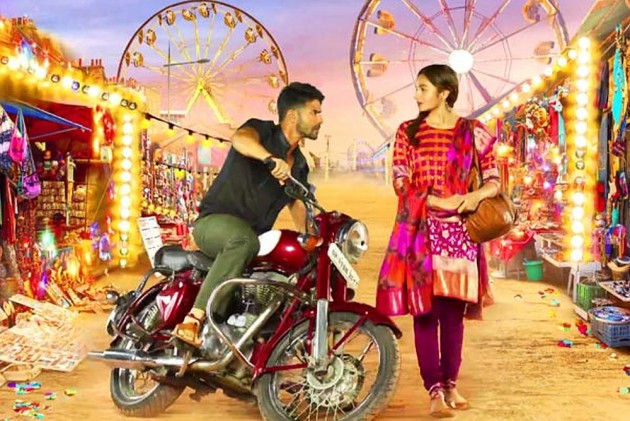 It may be a Bollywood romcom, co-produced by a mainstream production house (Dharma), with popular young stars, but what Shashank Khaitan's Badrinath Ki Dulhaniya does, is shine a light into India's heart of darkness, where the feudal khap mentality still rules; where men make the rules, women follow. When a young woman escapes this patriarchal hell, the order to is to go find her, bring her back so that she can be publicly lynched, as a warning to other girls with ambition.

That the film waves the feminist flag is good enough reason to cheer, even though it flies half mast-- not quite sure if a full on gender revolution would go down well in the B and C centres. Still it's a lot that in a Hindi film the leading lady says love is not enough, respect is important too, and waits out her suitor’s ardent stalking till he learns to respect her, and she him.

Badri (Varun Dhawan) is the Jhansi dude, belonging to the feudal Bansal family, controlled by the patriarch’s (Rituraaj Singh) seeming feeble heart that seizes anytime there is a hint of protest. The older son (Yash Sinha) capitulated and married a woman of his father’s choice; Badri falls in love with Vaidehi (Alia Bhatt) and is genuinely puzzled when she does not reciprocate; what’s not to like about a good-looking bloke from a rich family? Badri plots and manouevres to get a proposal, with the requisite dowry, approved by his father. The film starts with a disclaimer that it does not endorse dowry, but there will be many amidst its target audience, who will not be converted by the film’s message, but you can’t blame the filmmaker for trying.

The conflict, refreshingly enough, is not rich versus poor (or rather middle-class), but male entitlement versus female ambition. Vaidehi wants to escape the suffocation of a small town with its built-in male chauvinism, Badri is an inherently decent guy who needs to get generations of patriarchal conditioning and its automatic response of violence out of his mind before he can win Vaidehi’s love and respect. If Badri does not come across as a creep, it’s because Varun Dhawan plays him with charm and vulnerability. Even if he breaks out into macho aggression a few times, his heart is not in it. In a funny scene (which would not have been so if it had been a woman), he is saved from molestation by a group of men, by Vaidehi and her friends.

Khaitan’s is observant of small town life, where material progress (swanky car showrooms, shiny new cafes) have not made much of a dent in the mindset as far as women are concerned, but it is equally true that a lot of women who are making their careers in big cities come from just these kinds of towns—Vaidehi is the rebel, her sister is pragmatic enough to realise that for her escape will be via marriage to a good (read mild-mannered) man. It  would also not seem odd to a small-towner, that Badri hugs and hold hands with his best buddy (an energetic Sahil Vaid) rather than with the girl he loves—that’s the way it is in a Jhansi-like town. Badri, with his cheerful innocence, is in fact an aberration in that milieu—as he says to Vaidehi at one point, “I want to marry you, not make you my girlfriend,” quite unaware of the hypocrisy steeped into that declaration.

The combined talent of Varun Dhawan, Alia Bhatt and Sahil Vaid make the film enjoyable, but the Dhawan instinctively gets the contradictions of Badri’s personality right, and gives a fine-tuned performance.