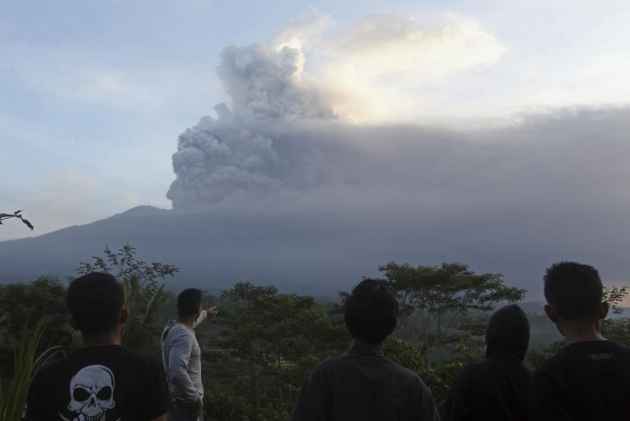 Thousands of foreign tourists were leaving Bali by plane today following a nearly three-day airport shutdown sparked by a rumbling volcano on the Indonesian holiday island.

The alert level on Mount Agung remains at maximum, but a change in wind direction blew towering columns of ash and smoke away from the airport, prompting authorities to re-open the island's main international gateway yesterday afternoon.

The move opened an eagerly awaited window for some of the 120,000 tourists stranded after the surge in volcanic activity grounded hundreds of flights, sparking travel chaos and forcing the evacuation of villagers living in its shadow.

Ash is dangerous for planes as it makes runways slippery and can be sucked into their engines.

"Since the airport reopened yesterday, some flights have resumed operation and things are gradually getting back to normal," said airport spokesman Israwadi, who like many Indonesians goes by one name.

More than 4,500 people have now flown out of Bali's main airport, authorities said, with around 3,200 of them on international flights.

However, the airport on nearby Lombok island -- also a popular tourist destination -- closed again Thursday after ash and smoke drifted in its direction.

The shifting wind direction was being caused by cyclone Cempaka which is battering Indonesia's main Java island -- west of Bali -- and has left at least 19 people dead in severe flooding and landslides.

Millions of tourists visit palm-fringed Bali annually. The majority are Chinese, followed by Australians, Indians, Britons and Japanese, according to the immigration office, which added that nearly 25,000 foreigners live on the small Hindu-majority island.

Tens of thousands of Balinese have already fled their homes around the volcano -- which last erupted in 1963, killing around 1,600 people -- but as many as 100,000 will likely be forced to leave in case of a full eruption, disaster agency officials have said.

Experts said Agung's recent activity matches the build-up to the earlier disaster, which ejected enough debris -- about a billion tonnes -- to lower global average temperatures by around 0.3 degrees Celsius for roughly a year.

While the volcano appeared to be belching less ash and smoke today, experts urged caution and have warned a major eruption -- could happen at any moment. It has already experienced a series of mini eruptions.

"The potential for an eruption is still there, but we cannot predict how big the eruption is going to be," said Devy Kamil, a senior volcanologist from the Indonesian volcanology agency.

"The volcano is still on the highest alert level."

Agung rumbled back to life in September, forcing the evacuation of 140,000 people living nearby. Its activity decreased in late October and many returned to their homes.

However, on Saturday the mountain sent smoke into the air for the second time in a week in what volcanologists call a phreatic eruption -- caused by the heating and expansion of groundwater.

So-called cold lava flows have also appeared -- similar to mud flows and often a prelude to the blazing orange lava of popular imagination.

Last year seven people were killed after Mount Sinabung on the western island of Sumatra erupted.