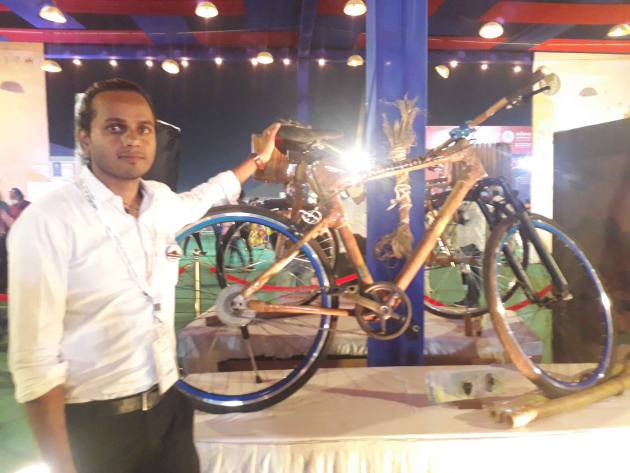 The humble bicycle has turned into a work of art for an innovator from Chhattisgarh. Mohammed Asif Khan, 30, a tribal youth from the Naxal-infested district of Bastar, has designed a two-wheeler with bamboo, incorporating four dying art forms of the state.

The cycle, named Bambooka, reflects a creative urge and a desire to save the near-extinct tribal arts of the state. The bicycle has 60 per cent bamboo components and weighs 8.5 kg, at least 10 kg less than a normal metal cycle.

Khan said he used four traditional items —wrought iron, ball metal, bamboo and jute—to make this bicycle. For instance, the tribal people use wrought iron to make various products for local use in various shapes and designs. He has taken one shape and modified it to make a mudguard of the cycle. Similarly, jute has been used to make the seat covers. Ball metal has been used to fix wires for the handbrake.

“Since a lot of ready-made products are available in the market, the use of local products is dying now. I hope my initiative will revive the tradition which is dying in our district,” Khan said. “I give full credit to district administration officials who gave me this idea. They asked me about six months ago to make a cycle out of bamboo to present it to the Tribal Co-operative Marketing Development Federation of India (TRIFED). It was then I started working on it,” he added.

He took three months to make the first cycle but it was not a commercially viable product due to its weight. “It weighed 25 kg. So, a person with 80 or 100 kg weight will find it difficult to ride it. So, I got in touch with people who are already working on this product,” Khan said.

Khan, who didn't have any mechanical background, learnt the initial geometry of the shape of a bicycle from the internet. Before making a full-fledged product, he made several unsuccessful attempts to learn the shape and corresponding arrangements of other parts. Besides, he carried out research and realised that there are three such brands available in India. “Vijay Sharma from Karnataka; Captain Shashishekhar Pathak from Mumbai and Godrej company have launched similar products. So, I got in touch with Capt Pathak and he helped me to improvise on its design and other components. I took cues from him and my second cycle was ready in 20 days and it weighs just 8.5 kg,” Khan said.

Bastar is a forest-rich area with natural bamboo groves. The state supplies bamboo products to other states, majorly for construction purposes.

The tribal communities make bamboo furniture also but Khan said that many people don’t use them due to a myth that only dead bodies should be laid on beds made out of bamboo. Also, the profit margin in bamboo furniture is not very high.

Due to lack of employment opportunities, there is always the chance that the jobless youth might turn to militancy and Khan is striving to wean way the youth from the lure of the gun

“My initiative will engage locals and create jobs. I have invested Rs 20,000 and will sell it at Rs 35,000. If I am able to get good orders, I will have a good profit margin and this will help generate job opportunities for people in my district,” Khan said.

He is planning to set up a manufacturing unit as well as a service centre so that he can employ more people from his community. Khan is confident that his product will do well commercially. “The bamboo cycle has a very good market in metro cities in India and overseas. I hope I can tap these opportunities,” Khan said. “I need funding and I request venture capitalists, who want to invest to bring change in the society, to come forward and help us take this cause forward.”

Visitors and senior officials from the state government were excited about the innovation.

Chhattisgarh tourism secretary, Anbalagan P, said, “I think this is a very unique initiative by a tribal youth from our state. This is attracting a lot of visitors. This encourages us to bring more individual achievers from the tribal belt on such platforms.”

Another IAS officer Rahul Venkat, who is the deputy secretary in the department of health says, “I am really very surprised to see the potential that tribal youths have in our state. I hope Bambooka will attract a lot of potential buyers from India and other countries.”

Ashish Meena, a visitor from Rajasthan who runs a bicycle shop in Jaipur, also expressed his desire to take the product to his city. “I have got all the details and will discuss with my co-partner in Jaipur. I will take one for a display to see the response. Personally speaking, I am really thrilled to see youth from a district like Bastar take such an initiative.”