Will Modi be able to deliver on Teesta convincing West Bengal Chief Minister Mamata Banerjee in lending her support to the agreement? 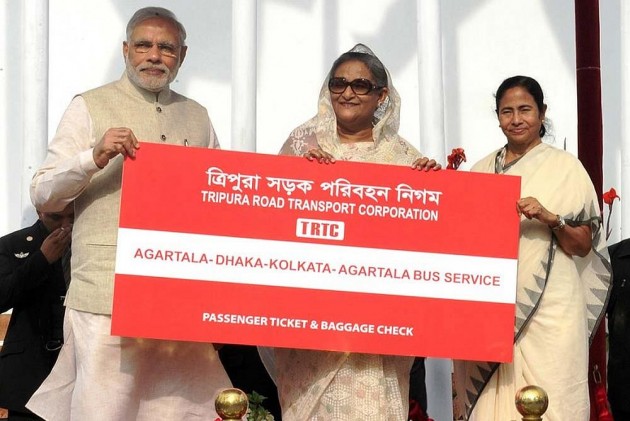 The inability of India and Bangladesh to resolve their differences and prepare the ground for signing the Teesta River Water sharing agreement is likely to take away much of shine from Prime Minister Sheikh Hasina’s forthcoming visit to the country.

Her visit is being billed as a big ticket item in the Indian diplomatic calendar. The Narendra Modi government is keen to project her as one of the most valued and reliable partners in the neighbourhood. Her bilateral visit to India after seven and half years, therefore, is the right opportunity for the government to showcase the growing partnership between the two sides for mutual benefit to the people in the two countries and beyond.

But the Teesta River Water agreement plays a central part in it.

Dhaka expects the agreement on river water sharing to be signed during Hasina’s visit to Delhi scheduled for April 7 to 10. But so far there is no indication that suggests the agreement will be signed while she is here.

Signals emanating from South Block instead suggest that the two sides may agree on a draft agreement or paper which is likely to be signed before the Bangladeshi parliamentary elections due in 2019 to boost Hasina’s image before her voters.

But if that is what Dhaka is left to be satisfied with then it will be “huge disappointment” say Bangladeshi officials involved with the high-profile visit.

The two sides have made several attempts in the past to ink the document on Teesta, but so far have remained unsuccessful. A chief reason for this has been the opposition to the agreement that has come from West Bengal chief minister Mamata Banerjee, whose state is one of the key territories through which the river flows after originating from neighbouring Sikkim.

Water sharing of common rivers has been a contentious issue both within and beyond Indian boundaries. However, in the mid 1990s the two sides managed to sign the Ganga River Water agreement, after the then chief minister of Bengal Jyoti Basu, lend his support to the document.

In 2011, during Prime Minister Manmohan Singh’s visit to Dhaka the two sides made an attempt to sign the agreement but in the face of stiff opposition from Mamata Banerjee, it remained elusive. Though Singh’s visit to Bangladesh was otherwise productive as the two sides managed to come to an agreement on a number of other issues, their failure to sign an agreement on Teesta created a popular perception in Bangladesh that India was not generous in looking after the interest of its smaller neighbour.

There is a growing feeling now that if the two sides are unable to break the Teesta deadlock then even Hasina’s visit to India next month might be seen as a failure despite the spin the media managers of the two governments are likely to come out with after the visit.

However, there are a couple of possibilities that might break the existing deadlock. It could be that the Modi government would be more persuasive in convincing the West Bengal chief minister to relent on her opposition to the deal. During a visit to Bangladesh in 2015 Mamata had indicated after a meeting with Hasina that she was willing to play a positive role towards the signing of the agreement.

But more than the internal politics within India, it is the image of PM Modi that is stake before the Bangladeshis. Unlike his predecessor Manmohan Singh, who was seen as the leader of a coalition government and therefore, more susceptible to pressure from his alliance partners, Modi is seen as a “tough” leader and a “go-getter.” This image has only been strengthened after the BJP’s emphatic victory in UP and other state Assembly elections. The expectations are, therefore, high that he will be able to deliver on Teesta. If he remains unsuccessful in convincing Mamata in lending her support to the agreement, it will be seen by people in Bangladesh as yet another example of India not delivering on its promise.

As a way out of this sticky situation the two sides could even broaden their negotiations for a comprehensive agreement on sharing water of all the rivers that are common to the two countries. But this plan also involves bringing China to the picture and the moment, despite Dhaka’s keenness Delhi might not be prepared to bring in Beijing to negotiations to resolve its bilateral issue with Bangladesh.

Bangaldeshi officials admit that even if no agreement is signed on Teesta River Water sharing, it is not that the country would face a serious crisis. But over the years, the issue has become a corner stone in Indo-Bangladesh relations and the ability of the two sides to formalize an agreement on it would go a long way to help Hasina in convincing her people why close and strong ties with Delhi was important for Dhaka’s future.

In the past, PM Modi has pulled quite a few rabbits from his hat to surprise both his supporters and his detractors. There are still expectations in certain quarters that he would be able to do so yet again on resolving the Teesta issue to further strengthen his growing alliance with Hasina. However, if he fails to do so, he would not only disappoint the Bangladeshi Prime Minister but also strengthen her detractors and the naysayers in the neighbouring country.