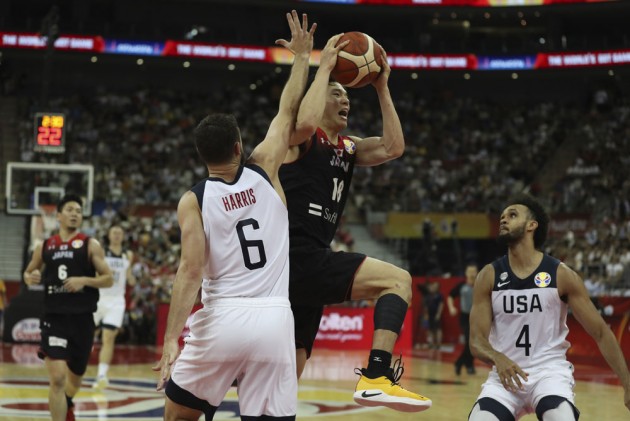 Giannis Antetokounmpo was in sensational form as Greece booked their place in the FIBA World Cup second round, while the United States completed a clean sweep in Group E.

Greece won a qualification shoot-out against New Zealand 103-97 to follow Brazil out of Group F, the South American side making it three straight victories by overcoming Montenegro 84-73.

After needing overtime to see off Turkey last time out, Team USA were back on song as they hammered Japan 98-45.

Australia and France booked top spot in their respective groups with wins over Lithuania and Dominican Republic, while Germany and Canada got off the mark.

USA BACK ON TRACK

Team USA had five players in double figures for scoring as they comfortably saw off Japan in Shanghai.

Jaylen Brown had a game-high 20 points and Kemba Walker added 15 and eight assists in a routine victory for Gregg Popovich's side.

They will face tricky encounters against Greece and Brazil in the second round.

Turkey were unable to follow the USA out of Group E, as Czech Republic advanced at their expense courtesy of a 91-76 victory in their meeting.

Having struggled to make his mark in Greece's opening two matches, Antetokounmpo ensured their campaign in China was not derailed in their first-round finale.

Defeat for the Tall Blacks meant rivals Australia qualified for the 2020 Olympic Games as the best-ranked team from Oceania.

The Boomers made it three straight wins at the start of a World Cup campaign for the first time in their history with an 87-82 victory over Lithuania.

Aron Baynes contributed 21 points and 13 assists for his first double-double in the competition, while Patty Mills scored 23 off eight-of-16 shooting.

Congratulations Australia on qualifying for the #Tokyo2020 Olympic Games!

By being the only team from the Oceania region to advance to the second round of the 2019 @FIBA World Cup, Australia earn Oceania's automatic Olympic spot.@BasketballAus @AUSOlympicTeam @Tokyo2020 pic.twitter.com/BMJycR92ix