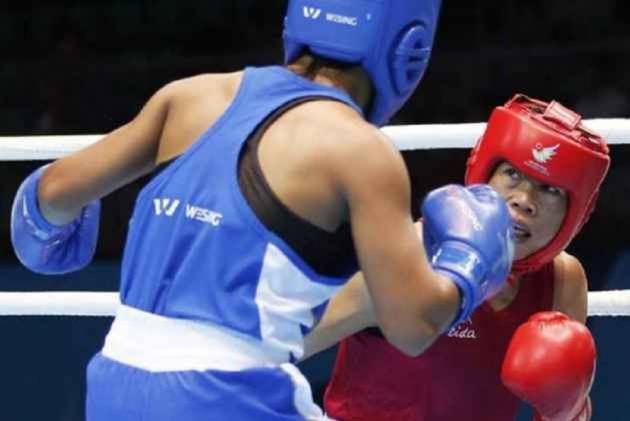 Arguably MC Mary Kom is the most decorated boxer in the world. But the five-time World Champion from Manipur will never be able to forget a certain Azize Nimani.

The Kosovo-born Albanian dashed the legendary Indian boxer's 2016 Rio Olympics dreams by defeating her in the second round of the 2016 World Championships in Astana.

And the European Championship bronze medallist in 51kg, Azize accepts that beating Mary in 2016 was a landmark win in her career.

Every One Of My Medals Is A Story Of Struggle, Says Mary Kom

"Beating Mary Kom during 2016 Olympic Qualifiers was an important fight for me. Because Mary is a legend in women's boxing and if you can beat her, you can beat everyone. So, of course, it meant a lot to me as it showed that I can be on top," Azize said during an interaction ahead of the AIBA Women's World Championship, starting November 15.

Azize is a fascinating character, an eclectic mix of different cultures and she flaunts it proudly.

"I basically represent Europe," Nimani said with a chuckle.

On her left bicep, there is an eagle tattoo and she excitedly replies: "That's the Albanian eagle and it's a part of me. I don't want to hide it. Yes, I am boxing for Germany but I am proud of my Albanian blood."

Her family migrated to Germany from war-torn Kosovo when she was only seven years old.

"We moved to Germany when I was seven years old, so I basically grew up in Germany and it wasn't as difficult for me," she said.

But it wasn't as easy for her elder siblings, who have memories of Kosovo's war of independence.

"But I know, for my brother, sisters older than me, it was a little bit more difficult. Culturally, they have more Kosovo roots in them compared to me. If you want to be a part of some culture, you will be, doesn't matter where you come from," said Azize.

"I am proud that I have my roots in Kosovo and also proud that I am a German now. Because now I am boxing for Germany and that's all what matters."

Germany as a nation has been an integration of many cultures but that image took a hit when Mesut Ozil walked out of national football team, alleging discrimination and racism after country's first-round World Cup exit in Russia, earlier this year.

Ozil, a German of Turkish descent was criticised for meeting Turkish President, Recep Tayyip Erdogan, who has been accused of human rights abuses.

When Azize was asked about Ozil's experience, she said: "I wasn't at his place so I can't talk for him (Ozil) but every story has two parts. People have to work together and not against each other. It will always be the way to understand each other."

But she made it clear that her nine years with the German national team has been a great experience where she has always been treated well.

"It wasn't as difficult for me to integrate myself in German culture. Nine years in the German national team and not for once did I think that they treat me badly because I am not 100 per cent German. I can't talk for someone else but I can talk for myself."