Beginning Of The End?

The fall of the Musharraf regime may not be imminent, but the sudden and spectacular agitation against him seems to indicate that it is only downhill slide from now on For more than half its life, Pakistan has been under military rule. Prevez Musharraf is the fourth dictator in khaki uniform, his three forerunners being Ayub Khan, Yahya Khan and Zia-ul-Haq. The luckless Yahya came a cropper in just three years because of the liberation of Bangladesh in 1971. Both Ayub and Zia lasted 11 years each. In both cases, however, came a time when popular sentiment against them exploded, about a year before Ayub's forced exit and somewhat longer before Zia perished in a still mysterious plane crash. Now Musharraf (often called "Mush", to rhyme with his benefactor, George Bush of the United States), who seemed to be sailing smoothly, occupying both the presidential palace and the Army House for seven and a half years, appears to have reached that twilight zone. From now on, it is only downhill slide.

No wonder, there is striking unanimity among seasoned Pakistani analysts and Pakistan watchers elsewhere that while the fall of the Musharraf regime may not be imminent, the sudden and spectacular agitation against him is the beginning of his end, thanks to the massive popular outpouring that began in Islamabad and is now spreading to other cities in Pakistan. Both the General in his labyrinth and his benefactors in the White House and the Pentagon are manifestly jittery. At the same time, the two former prime ministers and leaders of mainstream parties currently in exile, Benazir Bhutto and Nawaz Sharif, have perceived their opportunity, and are trying to seize it to give Pakistan's self-appointed "saviour" the last push.

If Musharraf is now in the eye of the storm—which he certainly is—it is due almost entirely to his own folly of wanting to ease out Chief Justice Iftikhar Mohammed Chaudhry for reasons that have not so far been spelled out but can be easily deduced. Although he had been under considerable squeeze from both the Americans and his erstwhile Islamist collaborators, like all military despots, Musharraf was evidently overconfident. He apparently believed that Chaudhry, like so many pillars of the judiciary in the past, would succumb to the relentless pressure to which the Army House and such infamous agencies as the ISI were subjecting him. But, to the consternation of all concerned, the Chief Justice stood up to his tormentors stoically and admirably. 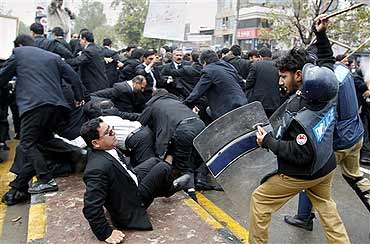 When Chaudhry and—even more shockingly—his wife were "roughed up" by Musharraf's brutish police and the Pakistani media, to its credit, publicized the disgraceful scenes on the TV and in newspapers, practically all hell broke loose. Lawyers of Pakistan have been part of all agitations against tyrants, but they have never before led any agitation. This distinction the Black-coated profession has acquired this time, understandably because the Chief Justice has become the nation's hero and icon by virtue of defying the military regime's tyranny, and enjoys the support of the media and large sections of the Pakistani civic society. The rattled commando general has tried to apologize to the Geo TV channel that his police attacked and has even been talking of a "conspiracy against me". But this doesn't seem to be cutting any ice.

The Americans have their own reasons to worry. As is their wont, Bush and his cohorts have been speaking with a "forked tongue", berating Musharraf in private for giving comfort to the Taliban and Al Qaeda and publicly praising him as their "key ally" in the war on terrorism. Their theory that, all things considered, he is their "best bet" because any alternative to him "would be worse" is fraying at the seams.

The crowning irony is that what began as a personal tussle between the mighty president-cum-army chief and the head of the Pakistani judiciary has gone far beyond the original cause and in a remarkably short timeframe and has focused on the fundamental issues of "return of democracy, rule of law and separation of powers". The resignations of half a dozen judges in protest against the beastly treatment meted out to Chaudhry and his Begum speak for themselves. The country is taunting Mush about "enlightened moderation" and "real democracy". Even so, it is worth examining why Mush wanted the upright and respected Chief Justice out.

At first it seemed that Musharraf was apprehensive that the CJ might obstruct his dubious plan to get himself re-elected president for five more years while retaining the right to wear his military uniform. But since the plan is timed for end September, it could not have been the cause of precipitate action at so early a stage. It is more likely that the General was peeved by the unanimous judgment of a nine-man bench, headed by Chaudhry, invalidating the sale of the Pakistan Steel Mill. What infuriated him even more were reports that the CJ was about to ask the ministries of defence and the interior to produce in court, or explain the whereabouts of, a large number of Pakistanis who have "gone missing". Those who have filed a petition on this issue allege that these persons have been handed over to the CIA by the Pakistani ISI in return of generous cash, reportedly as much as $ 80 million.

According to Pakistan's highly respected commentator, Ayaz Amir, what Musharraf had landed himself in is nothing less than a "judicial Kargil", although its impact could turn out to be that the "military debacle" on those steep heights, from which Nawaz Sharif "rescued our budding Rommels" by scurrying to Washington—something he has since regretted. Who would rescuer Musharraf from the present disaster?

India, of course, has no role in the whole sordid affair. Nor would it be wise for any Indian to intervene in Pakistan's internal affairs although the Indian people's preference is to have democracy, not military rule, there. However, the inevitable weakening of Musharraf in his country would surely affect adversely the peace process that, for all the disappointments and frustrations on both sides, has gone on for more than three years.

Inder Malhotra is a former editor of The Times of India. This piece appears in Outlook Saptahik dated April 2, 2007