Beware: Take Selfies With Karnataka Minister DK Shivkumar At Your Own Risk 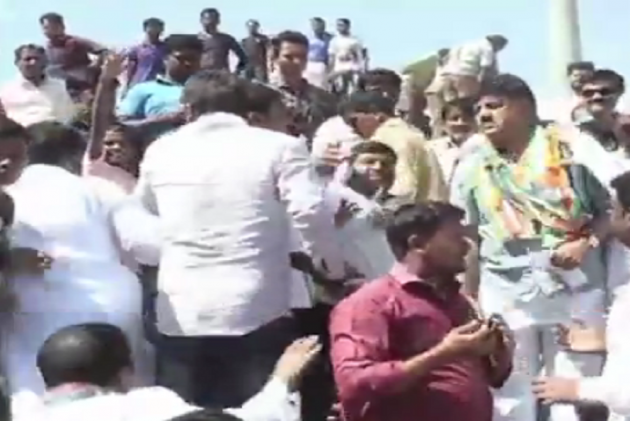 Karnataka Minister DK Shivkumar hates when he is not in control –like posing for a selfie- and could SNAP at you if you try to pull him into a frame.

Three months ago, the energy minister flung the phone of an intrusive student who tried to take a selfie with him at a function in Belagavi, on Sunday he again slapped away the hand of a man in Bellary attempting a selfie and shoved him aside.  Of course, he could have been a bit more polite like Prince Harry, who in 2015, told off a teenaged female fan who wanted a selfie with him. “Selfies are bad,” Prince Harry had said.

Not everybody hates selfies – the derisive cousin of self-portrait that has been in vogue since time immemorial. Indian Prime Minister is a great proponent of selfie, so much so that he even managed to pull the famously reticent Chinese President Xi Jinping into a frame.

But the Karnataka minister certainly don’t enjoy it, maybe because of the fear that the picture could be used by influence peddlers as proof of proximity to the minister.

#WATCH Karnataka Minister DK Shivkumar slaps away phone of a man who was trying taking a selfie with him in Bellary (4.2.18) pic.twitter.com/iLo6OSyT2Z

According to ANI report, the incident took place at the Vijayanagara College Stadium in Hosapete on Sunday when Shivakumar had come to supervise the construction of the stage for All India Congress Committee president Rahul Gandhi’s event on February 10.