One of the most detailed accounts of the doctrine(s), strategy, tactics and goals of the Pakistani Salafi jihadist enterprise Markaz Dawa’-wal-Irshad (MID), the terrorist outfit Lashkar-e-Taiba (LeT) and its parent outfit Jama’t-ud-Dawa (JuD) 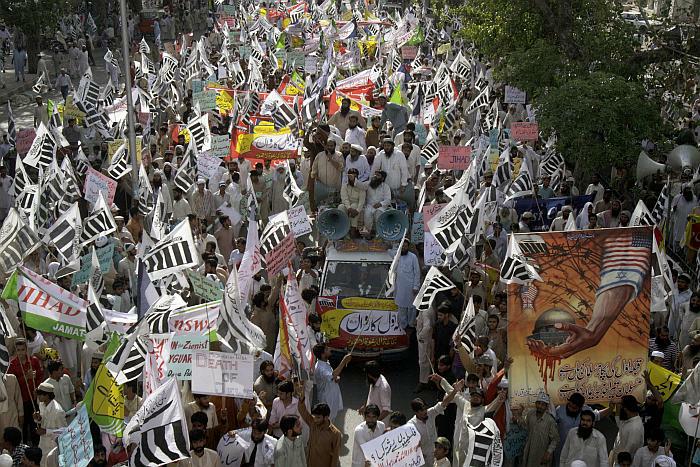 During his visit to India, the US Secretary of State John Kerry pledged to work with India to destroy the terrorist outfit Lashkar-e-Taiba (LeT), which he equated with the al Qaeda. India had recently protested to Pakistan over yet another delay in the trial of the LeT commander Zakiur Rehman Lakhvi and others who are charged with November 2008 Mumbai attacks. The latest book by the former New York Times contributor and author Arif Jamal meticulously describes why there should be little expectation of a trial and due punishment. It notes that the moment international pressure on Pakistan to try the LeT men relented, the Advocate General of Punjab told the Supreme Court that “the Punjab government wanted to withdraw the appeal because the Punjab government did not have enough evidence against Hafiz Muhammad Saeed” of the LeT’s parent outfit Jama’t-ud-Dawa (JuD). Saeed was subsequently released from an ostensible house arrest. Jamal notes that the LeT operatives have lived large under custody, enjoyed conjugal visit privileges and while in jail “Zakiur Rehman Lakhvi even fathered a son who is being raised as an LeT jihadist”. Jamal writes that the jihadists have nicknamed the boy Maulana Adialavi apparently after the Adiala prison where he was conceived.

Arif Jamal has produced one of the most detailed accounts of the doctrine(s), strategy, tactics and goals of the LeT, which he expounds is just the India-oriented head of the jihadist hydra JuD that aims to launch not a regional but a transnational " holy war". The author traces the ideological and organizational origins of the JuD to the November 1979 rebellion and takeover of the Holy Ka’aba by the Salafi millenarian group led by Juhayman al-Utaybi and patronized, among others, by the former Saudi chief cleric Abdul Aziz bin Baz. The Saudis quelled the rebellion with help from France and later executed al-Utaybi and dozens of his cohorts including the self-professed Mahdi (messiah) Muhammad al-Qahtani. But the radical Salafist legions called the Juhayman’s Ikhwan (brothers) survived including a Pakistani cleric Maulana Badiuddin Rashdi of the Ahle Hadith sect and the Saudi siblings of Indian descent: Ahmed and Mahmood Bahaziq. Jamal chronicles the founding of the original Pakistani Salafi jihadist enterprise Markaz Dawa’-wal-Irshad (MDI) in Lahore in 1987 by Rashdi, Bahaziq brothers, Zakiur Rehman Lakhvi, Zafar Iqbal, Amir Hamza and Hafiz Muhammad Saeed. Saeed was a rather low ranking figure in the Pakistani Salafi hierarchy and was appointed merely the mudeer (manager) of the MDI. He would later elbow out his ailing mentor Allama Rashdi to take over as the emir of the MDI, which later on changed its name to JuD in the aftermath of the December 2001 attack on the Indian parliament. The JuD has retained Juhayman’s creed minus any overt longing for a messiah. Jamal debunks the myth that Osama bin Laden’s mentor Abdullah Azzam, who created the al Qaeda predecessor Markaz-al-Khidmat, was among the MDI’s founders.

While the book uses the LeT— the most vicious and well-known brand of the Pakistan-based Salafist franchise— in the title, the author has made every effort to highlight that JuD remains the overarching jihadist umbrella that sees Kashmir as only a jumping board to rest of the India and, in turn, India as a prelude to its transnational " holy war". Arif Jamal notes that being born out of the Juhayman’s Ikhwan, which had cells in several countries, gave MDI/JuD a head start in its world jihadist campaign. He writes that the 1990s Bosnian war was truly an MDI/JuD jihadist campaign for which scholars and policy makers gave the al-Qaeda an erroneous and undue credit. Jamal archives that the first battlefield exposure of LeT men like Zakiur Rehman Lakhvi was in Urgun, Paktika, which is the city where the Jalaluddin Haqqani network had once started its reign of terror. The MDI/JuD were closely allied with the Afghan Salafis like Abur-Rab Rasul Sayyaf and Jamil-ur-Rehman’s groups in Nuristan and Kunar—they used and later took over their training camps (muaskar). Hafiz Saeed did his militant training in one of Sayyaf’s camps near Sadda in the Lower Kurram Agency while JuD’s men were one of the first outsiders waging " holy war" in Chechnya. Jamal is spot on that despite collaborating and/or competing with the al-Qaeda and its allies intermittently, the JuD arrived on the transitional jihadist scene long before it, and will outlive it as well. Leaders like John Kerry will be well advised to pay attention to the minute detail furnished by Arif Jamal. Pakistani security establishment has a vested interest in sending the US and others on a wild goose chase to hunt al Qaeda and underemphasize the JuD’s global ambitions. Jamal notes in detail the overlap and connections between the ISI, the drug baron and terrorist Dawood Ibrahim’s D-Company and JuD/LeT.

Arif Jamal’s gripping account of the ideological and numerical monstrosity which the JuD has become, with roughly half a million men having graduated through its militancy programs, is anchored firmly in primary source information, personal interviews with the JuD leaders, including Hafiz Saeed, and visits to their training facilities. Jamal’s strength is however not just as a chronicler but also as scholar of the jihadist doctrine and its nuances in which he outshines his peers. He cuts through the mishmash of fundamentalist Islamism to show that similar strains of Wahhabism and Salafism also compete and the latter’s scholars like Nasiruddin al-Albani look at the former with a certain scorn. The author hits the notion out of the ball park, defining accurately that the JuD and its ilk do not consider Saudi Wahhabists true Salafists in that the Wahhabi Fiqh (religious jurisprudence) is derived from the orthodox Hanbali Sunni school. The JuD is actually at loggerheads with the Deobandis of South Asia and Afghanistan and aims to convert them to the Salafi creed, which in the sub-continent carries the brand name Ahle Hadith.

The author has called the JuD a “wholly owned subsidiary of the ISI” but has successfully resisted the temptation to view it through the ISI lens. He is of the view that while the ISI, which to him is merely a euphemism for Pakistan army, preserves and manipulates the JuD marionette for projecting power in both India and Afghanistan, the jihadists consciously underplay both their local and transnational agenda as they do not want a premature fight on their hands. While the ISI has pitched the Salafis against the Deobandi jihadists that it can no longer control, the Salafis intend to convert or subdue all other jihadist shades for doctrinal reasons as well. The author cites the cardinal JuD treatise “Jihad in the Present Times” that lists eight reasons to wage " holy war" to describe the global ambition of the JuD for which it already has proactive cells in all Muslim countries, Philippines, Thailand, Europe, the United Kingdom and the USA.

The book spans 12 chapters and is literally a treasure trove of information on the JuD organization structure, manpower, training and recruiting methods, operations, including Mumbai attacks, and indeed the Salafist creed. It is a marvellous database of names of organizations and individuals that anyone dealing with the JuD will miss at their peril. Including an abbreviation list, glossary of Arabic terms and an expanded index in the next print run would be highly desirable as would be a searchable electronic edition. Arif Jamal stops short of making any policy recommendations but it would be extremely imprudent for politicians and counterterrorism experts to ignore this profoundly well-documented and timely warning in the face of the MDI/JuD/LeT’s call for a transnational jihad.

Dr. Mohammad Taqi is a regular columnist for Daily Times, Pakistan. He can be reached at mazdaki@me.com or via Twitter @mazdaki