The latest attacks in Mumbai – still unresolved at the time of writing – are intended to undermine international confidence in India and to instil a sense of pervasive insecurity and terror within the country, in an attempt to weaken the economy at large. International perceptions of India over the past years have been increasingly positive, and there is clearly an effort to alter such perceptions in order to affect foreign investments as well as tourism.

What remains both tragic and astonishing is that, after the attacks on the Marriott Hotel in Pakistan, greater precautionary measures had not been implemented in the country’s top hotels. Security at the Taj and Oberoi Trident was virtually non-existent in terms of preventing or containing a terrorist attack of significant magnitude.

There has, for some time now, been a great deal of talk about giving more powers to private security agencies to effectively carry out protective functions in private establishments, and particularly for collecting surface intelligence. It is obvious, however, that little has been done in this direction, and private security remains largely cosmetic, particularly in proportion to the challenges of counter-terrorist protection. 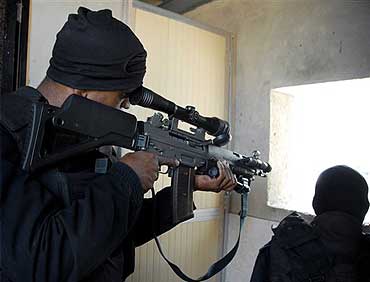 As regards the responses, it is premature to speak of particular details of the ongoing operations. However, one thing is clear – specialised counter-terrorism responses remain highly concentrated in particular locations and with elite ‘special force’ units, such as the National Security Guard (NSG) and small units in the Armed Forces, Paramilitaries and the special Anti Terrorism units in the Police. At a structural level, there is clearly an excessive measure of over-centralization and an inability to delegate authority and capacities of response where these are most needed – at the level of the ‘first responders’, the forces available at each thana and police post. Response capacities must be distributed across the country, at the level of the police station and, in urban areas, effective response times must be reduced to between one and three minutes to any terrorist incident. Absent such capacities of response, there is little hope that we will be able to reduce the effectiveness of terrorist attacks and the concomitant costs in lives, material and perceptions – both domestic and international.

A comprehensive reorientation and retraining of Police forces across the country is now an urgent imperative – one that can brook no further delay. Protocols of counter-terrorism response must not only be clearly defined and disseminated among all security agencies, all personnel must undergo processes of immediate and continuous retraining, including simulated operations and crisis management drills

It must, by now, be abundantly clear that the prevailing ‘emergency response paradigm’, the principal, if not exclusive, paradigm of response in India, has failed. The challenges of terrorism, proxy and sub-conventional warfare and insurgency are no longer transient ‘emergencies’, but chronic afflictions across vast areas of the country. Permanent and institutionalised mechanisms of response must now be designed to cope with these persistent challenges. Existing institutions are neither sufficient for, nor geared to, the imperatives of response to terrorism.

Crucially, any response that may be evolved or designed must be composite. This implies, first, that responses must be embedded into the permanent institutional mechanisms of security, law and justice administration. Further, weakness in any one aspect of the mechanism, from the first or ‘lowest’ elements of intelligence and policing, and up to the highest levels of administrative, judicial and legislative functions, jeopardise any gains that may be secured by any other part of the system. Similarly gains in one region are often frittered away as conflict and terrorism quickly emerge in another, robbing the nation of any cumulative advantage arising out of counter-terrorism successes or the ‘peace dividend’. Critically, responses must not cancel out one another. The tactical and short-term must be fully reconciled with the strategic and long-term. The endless and ill-informed debates on legal vs. developmental vs. political vs. negotiated vs. policing vs. military responses are fruitless. This entire spectrum – from use of extreme force to negotiations and conciliation – is comprehended within the notion of ‘counter-terrorism’.