Beyond Good And Evil

Gangs of Wasseypur is perhaps India’s first post-nationalist film — a Nietzschean saga against a provincial backdrop, illuminating a squalid aspect of the country's political history. 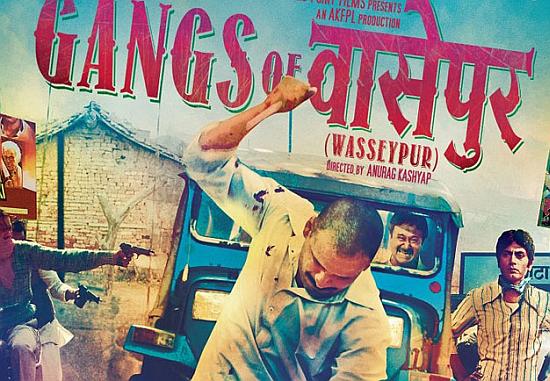 Anurag Kashyap’s latest offering is a Nietzschean saga against a provincial backdrop, illuminating a squalid aspect of India’s political history.

After land is given away by the newly independent Indian government to the major capitalist players, they recruit henchmen to run Bihar’s coalmines. The two rival clans, the Qureshis and the Pathans, refuse to forge a class, cultural or even religious solidarity. Clan-pride works hand-in-glove with an economic logic of survival. Ramadhir Singh, a Hindu businessman turned politician, portrayed with restrained élan by Tigmanshu Dhulia, shrewdly plays off the two growing mafia clans against each other. Piyush Mishra voice-overs that the world is inhabited by the perfidious and the foolish, as we slowly learn how the cunning Hindu divides and rules over the vainglorious Muslims. Wasseypur contends that the criminalisation of the poor comes from a foundational violence of the nation state and not merely from the immoral aberration of a corrupt system.

In off beat, social-realist films of the past, which featured the works of Bimol Roy and K.A. Abbas among others, the underprivileged was always depicted within an idealistic nationalist imaginary. The characters in Wasseypur use trains to smuggle in guns and imitate Bollywood stars, but these apart, they remain impervious to the nation’s imagined community. Even though bearing shades of the earlier brand of social realism as well as the Benegaleque “middle-cinema”, Anurag zooms in on a fragmentary mise en scène, where the national cord is rendered tenuous, instrumental and populist. In that, it is perhaps India’s first post-nationalist film.

Since Sholay, the prime crime of Hindi cinema has been to create a moral binary between the good and the bad criminal. A similar binary was adopted in other films including Deewar. Even years later, the morally torn Kishen in Parinda is contrasted with the psychotic Anna. Satya disturbs the binary up to a point. But as a gangster with an obscure past, Satya’s romantized figure ends up facing the moral dilemma of truth and lies. The individualisation of crime has been the main culprit behind the conservative moral impasse in all these films. Company goes a step further in greying the moral topos, but remains caught in the snake-and-mongoose schema of violence. Wasseypur blasts open the moral dichotomy ailing Bollywood’s films on crime. Manoj Bajpai, playing the lead role of an unscrupulous Sardar Khan, does not dramatise his rapaciously gleeful character. He maintains a restrained language of revenge. Khan’s confrontation with his adversary Ramadhir begins with a battle of economic one-upmanship. The film casts aside the stereotype of the criminal wrought by his psyche and fixes its lens on the web of his socio-political circumstances. Within this provincial history of criminality, the film registers the transition of time by depicting the changes in weaponry, consumer goods and styles of clothing. The detailing enriches the sociological texture of the narrative.

In Wasseypur, criminality is identified beyond good and evil – in the messy logic of politics. Doing away with the abstract, individual subject of crime, the film brings in the real subject: a community of labourers, lured into playing henchmen or comprador to capitalist puppetmasters. The real subject of crime is discovered within a noxious capitalist grip over social relations. To opt for such a narrative regarding the poor Muslims from the Bihar region, is a double-barrelled political counter to the jingoistic backlashes which occurred in Mumbai against these workers who provide India its largest and cheapest labour force.

By its lack of sentimentality and melodrama, Wasseypur steers clear of bourgeois affectations. The film allows the characters to depict their situation without gloss. When Nagma learns of Sardar Khan’s womanising ways, she tells him with sarcastic matter-of-factliness to eat well, so that he doesn’t disgrace the status of his conjugal life.

In Bollywood crime films, there are gunshots and killings, but with a conspicuous lack of blood, which creates a false spectacle of violence. In Wasseypur, blood flows without fuss, whether the butchers hunt or become the prey. The mutilation of bodies where goats are slaughtered animalises the sacral space of the human, exposing a bizarre, mixed economy of death. It also brings into focus the ghettoising and forced criminalising of poorer (minority) life worlds.

The film anticipates Sunil Menon’s recent criticism (‘Which Way to Ramgarh?’, Outlook, June 4th, 2012) regarding Bollywood’s sense of “atopia” or “placelessness”. Wasseypur thrives on details, where a cinematic reconstruction marks out a specific regional territory which violently mocks the nation’s utopian rhetoric. For once in Hindi cinema, a proper place stains the map.

The wives of Sardar Khan break the clichés regarding women in crime films. They aren’t innocent foils to the criminal world, nor do they hesitate to challenge existential limits. Both women protest against their pregnancies, dare the conventions against their sexuality, and tell their minds without fear, despite living within a hyper-masculine atmosphere. All women in the film live and confront the males with a space-affirming vulnerability. When Mohsina tells Faizal to learn the decency of asking for “permission” before holding a woman’s hand, you hear the stirrings of a new cultural ethic in Wasseypur.

The faces in Wasseypur are not starry caricatures. Everyone, from the blunt Richa Chadda to the understated Nawazuddin Siddiqui, are stunning ruptures against Bollywood’s commodified faces. Their faces introduce a refreshing body-language in Hindi cinema, where each face appears as an opening into the everyday world. Sneha Khanwalkar’s music, through her gravelly and localised experimentations with sound, deviates from Bollywood’s conventional melodic norms.

Anurag’s western influences as much as his reference to old Hindi films show the conscious attempt by an avant-garde student of cinema to turn his craft and characters into mimetic possibilities. The reckless and promiscuous Sardar Khan is a parody of Vito Corleone as much as Faizal Khan is a provincial mimic of Amitabh Bachchan’s screen persona. Except a couple of technical glitches and a limited effort to temper the masculinity in the film, Wasseypur delivers its goods as a significant moment of departure from mainstream Bollywood imagination. Amitabh’s veteran-eyed, profuse appreciation of the film might well turn out to be as historic as Satyajit Ray’s lauding of Sholay.

Manash Bhattacharjee is a writer and scholar, living in Delhi.