Despite the brouhaha over the minarets, European Muslims today are focused less on religious symbols and more on securing recognition as full-fledged European citizens. 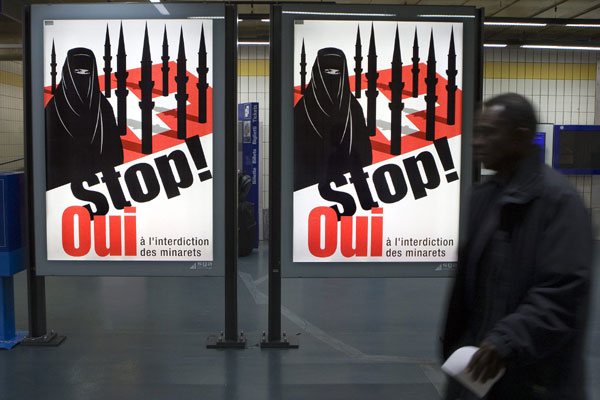 Switzerland's vote to ban the building of new minarets exposes a damaging fissure in Europe. It has provoked outrage among Muslims and applause from Europe's increasingly popular anti-Muslim politicians. As such, it appears to deepen the divide between Muslim and non-Muslim Europeans. However, although predictable, the reactions are misleading: for all the furore over minarets, European Muslims today are focused less on religious symbols and more on securing recognition as full-fledged European citizens. The brouhaha over the minarets also comes as a new reminder that while European politicians may win votes in some places by ranting against Islam, prosperity, stability, security and social peace across the continent depends on the successful integration of Europe's Muslim citizens.

The overarching challenge for European governments is to shift the focus from bans and restrictions on Islam and Muslims and instead try to forge a cohesive and inclusive society where all citizens – including the continent's Muslims – feel at home. Building belonging, accommodation and acceptance, however, remain much too low on the agenda of most European Union governments. European leaders have for long preferred to refer to Muslims as "foreigners" and immigrants" rather than as citizens who can be Muslim and European at the same time. On the other hand, European Muslims have long lived outside the mainstream, demanding special privileges and treatment, rather than focusing on concerns such as jobs and education which they share with the larger society.

Most of Europe's 20 million Muslims came to the continent from South Asia, Turkey and North Africa in the 1960s and 1970s to work in the steel and textile factories, coal mines and, as Europe grew increasingly prosperous, the expanding services sector. The much sought after immigrants were, however, expected to go home once their contracts expired. Many countries like Germany did little to try to integrate their so-called "guest workers" and excluded them from any right to acquire full citizenship and nationality. As Europe's economies slowed, formal immigration was stopped although most countries did allow family reunions.

In theory, most European policymakers today recognize the importance of implementing successful pro-integration, anti-racist and anti-discrimination policies. In practice, however, the EU's focus on European Muslims is coloured by security and counter-terrorism concerns. EU anti-discrimination policies get lost in the maze of measures being enforced by states across the continent to combat radicalisation, especially of young men of Muslim descent. In Britain, for example, police concerns about and action against violent extremism among South Asians poison ongoing efforts to ensure a better integration of Muslims.

In addition, although Europeans are increasingly secular, it is difficult to overlook many Europeans' deep, historical prejudice against Islam, with Muslims viewed as "the other", echoing once blatant prejudice against Jewish communities. Many still cling to an out-dated notion of Europe as a continent anchored in Christianity, with Muslims as permanent outsiders and Islam and Europe as fundamentally incompatible.

The acrimonious debate over admitting Turkey to the Union now seems to be accelerating Islam and Europe toward a damaging collision course. Switzerland's anti-minaret move comes on top of French efforts to ban the burqa, the all-enveloping veil worn by an extremely small minority of Muslim women. French President Nicolas Sarkozy – who like German Chancellor Angela Merkel opposes Turkish entry into the EU – has initiated a nationwide discussion over what it means to be French, a move that many see as creating more walls between French Muslims and their fellow citizens.

In the Netherlands, fiery far-right politicians like Dutchman Geert Wilders woo voters by denouncing Islam as a fascist ideology while elections to the European Parliament this summer led to the election of two members of the xenophobic British National Party. Other politicians, who routinely link Islam to global terrorism, warn that Muslims and immigrants are stealing jobs from mainstream Europeans and sponging off the continent's social welfare systems. Racism is also a factor, since many Europeans automatically associate Muslims with immigrants of colour.

Meanwhile demands by some Muslims for special privileges such as segregation by gender at public swimming pools and hospitals and the practice of tribal customs, including polygamy, genital mutilation, forced marriages and honour killings, prompt concerns that Muslims do not share European values. A minority of young Muslims are indeed falling prey to radical ideologies. Europe's diverse Muslim communities and their leaders often pay too much attention to demanding their rights and not enough on fulfilling their obligations as European citizens.

Such attitudes encourage the view propagated by some US analysts and, Europe's far right politicians that European Muslims are determined to transform a once-tolerant continent into what has been termed Eurabia, a land where the sharia will reign supreme, adulterers will be stoned and thieves will have their hands cut off. Europe, according to this vision, is morphing slowly but surely, into the ultimate battleground for a clash of civilizations.

The reality is more complex. While the radical actions of some Muslims make headlines and provide fodder for Europe's far right, European Muslims represent a mere three percent of the population of the continent, hardly the numbers to ensure a Muslim take-over of Europe. True, a minority of Muslims may live on the radical fringes of society but a large majority accepts European norms and lives successful and integrated lives, belying the stereotype of European Muslims as obsessed with their religion, socially and economically marginalized and unable and unwilling to integrate into mainstream society.

New studies on Muslims in Europe by organizations such as the Open Society Institute paint a picture of communities of European Muslims living comfortably and in peace with their non-Muslim neighbours. The OSI and the British Council are working on projects which focus on living in a "shared Europe" where conflict and confrontation between different religious communities in not inevitable, provided governments – at national, provincial and local levels – implement correct policies.

Addressing Europe's unease about accepting multiple identities, a recent Gallup poll shows that an overwhelming majority of Muslims in France and Germany said they were loyal to their country and saw no contradiction between being French/German and Muslim. In Britain, a 2007 Gallup study found that despite Muslims' strong identification with their religion, a majority condemned terrorist attacks on civilians and did not want to live in segregated communities.

Also, most European governments are finally waking up to the challenge. Across the continent, efforts are being made to change school curricula to reflect Europe's multicultural landscape while state authorities are encouraging the recruitment of ethnic minorities into the police force, health services and government offices. They are also working to promote the setting up of businesses by Muslims and other minority groups. Meanwhile European business leaders, worried about shortages of skilled and unskilled workers, are pressing governments to open their doors to new migrants and are stepping up the search for workers in Europe's migrant communities.

Such efforts have to be sustained. The onus is on European leaders and policy makers to marginalize the far right's discourse of hate and anger. But European Muslims must also work equally determinedly to counter extremist and radical ideologies in their midst. If Europe is to prosper and grow, European policymakers must recognize urgently and publicly that Europe is now a multicultural society whose members are willing to celebrate diversity rather than fear it.

Shada Islam is a senior program executive at the European Policy Centre. She writes for YaleGlobal Online in a personal capacity. Rights: Copyright © 2010 Yale Center for the Study of Globalization. YaleGlobal Online