He was sent to jail last year in connection with 2017 Saharanpur caste violence case. 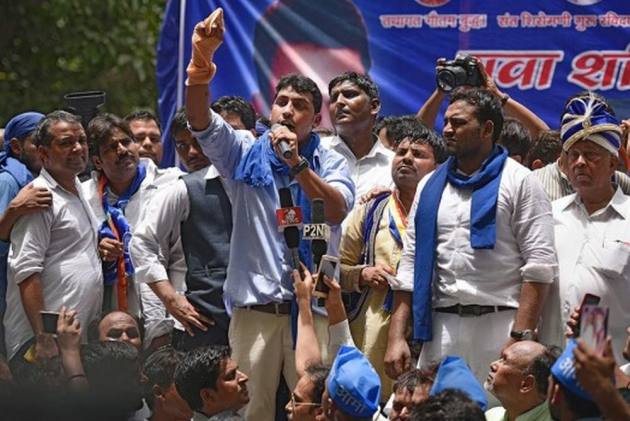 Hours after being released from jail, Bhim Army chief Chandrashekhar Azad alias Ravan on Friday said he will ensure that the Bharatiya Janata Party (BJP) is routed in the 2019 Lok Sabha elections.

"The Bhim Army will not buckle under pressure from the government and will fight in a constitutional manner to throw the BJP out of power in the general elections," Azad said.

Azad was arrested from Himachal Pradesh's Dalhousie in June last year in connection with the May 5 caste violence in which one person was killed and 16 others were injured at Shabbirpur village in Saharanpur.

The Allahabad High Court had granted him bail on November 2, 2017. However, police booked him under the stringent National Security Act days before his release. Under the NSA, he was to be detained till November 1.

"After going through the representation of Chandrashekhar's mother, it has been decided to release him early. He had to be in jail till November 1," a spokesperson of the Uttar Pradesh government's Home Department had said in Lucknow on Thursday.

Azad walked out of the jail at around 2:40 am as hundreds of his supporters wearing blue 'Bhim Army' caps had gathered outside the prison to celebrate his release, the Dalit group's national spokesperson Manjeet Singh Nautiyal said.

Many had thronged his residence and distributed sweets in the neighbourhood while a section of his admirers made a beeline to click a selfie with the Dalit leader.

The Dalit leader claimed that he met several inconsolable youngsters inside the jail who were falsely implicated by the police due to their caste.

He said his stay inside the prison had strengthened his resolve to fight against the alleged atrocities being committed against Dalits.

"It's a very long constitutional fight for our rights. It's time for the real battle. The Bhim Army was faltering in the absence of a leader, but I have returned now," the 31-year-old Dalit leader said, adding that he will not contest elections.

Talking about the treatment meted out to him inside the prison, Azad said he was given "dry rotis" and his family was not allowed to meet him.

All that I went through, I will make sure to return it to the BJP with interest in the 2019 Lok Sabha polls, he said, adding that he will not contest the upcoming elections.

He further said the government was playing politics on the SC/ST Act issue and the Dalit community will give a befitting answer to the BJP in the 2019 elections.

"The March 20 Supreme Court judgment diluting the Scheduled Castes and Scheduled Tribes (Prevention of Atrocities) Act was based on the government's views against the law," he said.

"Now, they have passed an amendment bill to restore the original version of the Act. We know what they are trying to do," he added.

Azad, however, denied revealing the Dalit group's plans for the future.

BJP sources in the state said the Bhim Army had played a big part in the win of joint BSP-SP-RLD candidate Tabassum Hasan in the recent Kairana Lok Sabha bypoll.

Azad had written a letter from inside the jail, asking Bhim Army cadres to campaign in support of Hasan and trounce the BJP.