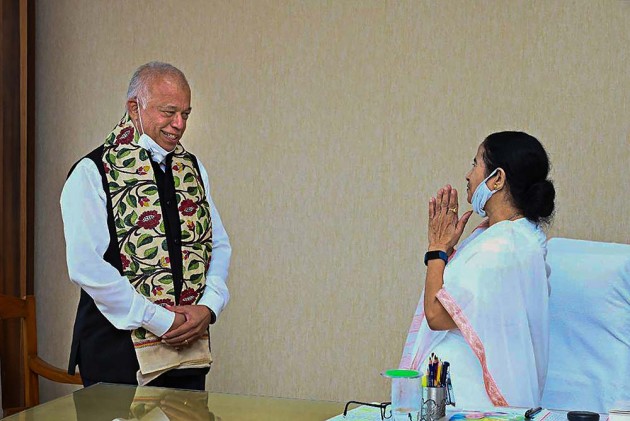 With former Goa chief minister and the just-resigned Congress MLA from Navelin assembly constituency in Goa, Luizinho Faleiro, joining the Trinamool Congress (TMC) in the presence of West Bengal chief minister Mamata Banerjee in Kolkata on Thursday, the TMC has taken two prominent faces of the Congress into their fold in the past two months – the first being the Congress women’s wing chief Sushmita Dev.

The TMC has already taken in a number of Congress leaders, including former MLAs, from Tripura into their fold. A TMC Rajya Sabha MP, unwilling to be identified, said that the party was eyeing a few more Congress leaders from Assam, Tripura, Goa and even Manipur and Meghalaya. In a move being seen as the party’s way to attract defectors with rewards, the TMC sent Dev to Rajya Sabha soon after she joined.

This poaching drive on the Congress took place amid the TMC’s escalation of attack on the Congress, portraying India’s grand old party as being weak, lacking in intent and therefore incapable of taking on the Narendra Modi-led Bharatiya Janata Party (BJP) in the 2024 Lok Sabha elections.

In contrast, the Congress had tried to extend a friendly hand to the TMC when the party decided that it would not field any candidate against Mamata Banerjee in the by-poll of Bhawanipur assembly seat, which Banerjee must win to continue as the chief minister. Explaining the party’s decision of not fielding a candidate, Bengal Congress president Adhir Ranjan Chowdhury had said that the party prioritised the strengthening of anti-BJP unity over its own interests.

The TMC, clearly, has a different way to go about. Born out of the Congress at the end of 1997, Mamata Banerjee’s party always tried to weaken the Congress in Bengal to gain in strength and eventually engineered a series of defections among Congress MLAs and MPs to build its own organisation. But this time, the magnitude of the aim is bigger, as the TMC is clearly looking to portray itself as  ‘the real Congress’, no longer in Bengal alone but across the country.

This becomes evident from the following lines that were part of an editorial published in the TMC’s mouthpiece, the Bengali daily Jago Bangla, on September 25: “The heritage flag of the Congress is now in the hands of the TMC. This is the sea… the rotten pond (the Congress) is now irrelevant. Those who are still with the Congress are welcome to the TMC. The same is the tendency in Delhi. We don’t insult the Congress. We are not talking of an alliance without the Congress. But if the Congress fails repeatedly, 2014 to 2019, the BJP’s benefits in the Lok Sabha and that cannot be allowed to happen again. Starting from Uttar Pradesh to several other states, the Congress has failed to recover. Days are gone to earn dividends from the heritage of the past.”

The editorial says that the TMC, too, is inspired by and proud of the Congress’ heritage and has deep sentiments for Indira Gandhi and Rajiv Gandhi, but if the Congress became a spent force on the battlefield, the TMC would not shy away from the responsibility of holding aloft the flag of secular, democratic and progressive nationalist forces.

It summed up the party’s line saying, “If the TMC is the real Congress in Bengal today, tomorrow the TMC will play the role of the real Congress nationally. It’s not a matter of ego. There is no complexity. The people want an all-out fight against the BJP and the Congress has failed to carry out its responsibilities.”

Over the past couple of weeks, both Mamata Banerjee and her nephew Abhishek, the TMC's all-India general secretary, have asked why the BJP-led Centre never targeted the Congress through its agencies but targeted the TMC's leaders relentlessly, using agencies like the CBI and the enforcement directorate (ED). They argued it was because only the TMC was taking on the BJP.

In turn, those who joined from the Congress, including Dev and Faleiro, have said, almost without an exception, that Mamata Banerjee was the only force that could be relied upon to defeat the BJP.

Mamata Banerjee had become a Congress MP in 1984 and won on a Congress ticket in 1991 and 1996 also. She had also served in the cabinet of Rajiv Gandhi as a junior minister. In 1997, when Banerjee’s relations with a majority of Bengal Congress leaders and the party’s national president, Sitaram Kesri, reached an all-time low, amid her own rising popularity, Sonia Gandhi had made a last-ditch effort to keep her from quitting, though in vain.

Since then, Banerjee’s rise in Bengal happened at the cost of the Congress’ decline, even though Banerjee had always enjoyed a workable personal relation with Sonia Gandhi. However, to quote a senior Bengal minister who spoke to Outlook on condition of anonymity, “Mamata Banerjee is in no mood at all to accept a Rahul Gandhi-led Congress as the leader of the opposition alliance. Mamata and Sonia have a workable personal relation but Mamata and Rahul do not enjoy the same.”

The TMC launched a poaching drive on leaders from other parties and an induction drive for civil society persons soon after returning to power for a third term in Bengal in May. Since then, the party has taken four BJP MLAs, a BJP Lok Sabha MP, and several Congress leaders, including former Lok Sabha MP Abhijit Mukherjee, who is a son of late Congress stalwart and former President of India, Pranab Mukherjee.

Bengal Congress veteran Abdul Mannan, who served as the leader of the opposition in the last assembly  (2016-2021), strongly criticised the TMC's role.

"I have repeatedly told the central leadership that trusting Mamata Banerjee is dangerous. But Sonia Gandhi and Rahul Gandhi repeatedly trusted her, made other compromises to accommodate her demands, even at the cost of damage to our organisation in Bengal. But Mamata Banerjee only responded with betrayals," Mannan told Outlook.

"Now that it's has become evident that the TMC is implementing the BJP's agenda of finishing the Congress, I only hope for good sense to prevail," he added.

Asked if the TMC’s poaching drive targeting the Congress in different states was not detrimental to the interests of the proposed anti-BJP alliance, a Bengal minister argued, “In no way. The Congress also takes leaders from other parties. Take the recent case of the CPI’s Kanhaia Kumar as the latest example.”