There have been numerous allegations on 'Bigg Boss 15' ex-contestant, Ritesh Singh, who has been in the news ever since he was eliminated from the house. Talking to Outlook, he speaks about his marriage to actress Rakhi Sawant, his first wife claiming they're yet not divorced, and lots more. 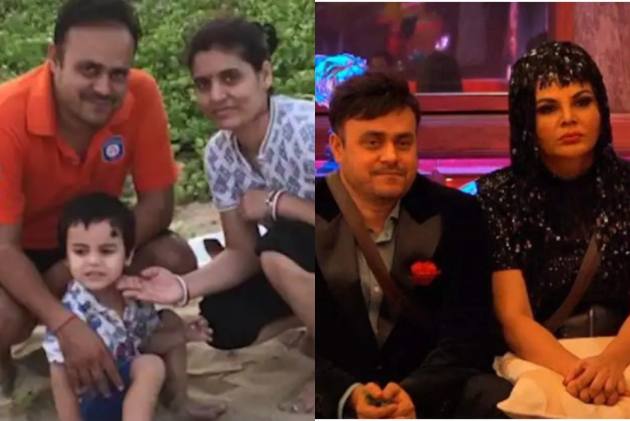 “My life was ruined already. I was silent because I understood that this is how our country’s system works. But I’ve had enough,” says Ritesh Singh, husband of Rakhi Sawant, who was recently eliminated from the ‘Bigg Boss 15’ house.

In a candid chat with Outlook, Ritesh Singh reveals how he isn’t yet married to Rakhi Sawant, how he has been troubled by his ex-wife, and how his life is being ruined because of this, and how he isn’t able to even meet his son. Excerpts:

You’re now out of the ‘Bigg Boss 15’ house. Are you missing Rakhi Sawant by your side?

Yes! Definitely, I’m missing Rakhi. Not Just Rakhi, I’m missing the BB house as well because I forged good friendships, had fun, fought and played games as well. So that goes unsaid, I miss the BB house a lot. I’m missing Rakhi the most because I honestly can’t do without talking to her for more than three-four hours. So this is actually a very different situation. Despite my desire to talk to her, I’m unable to do so. But, it’s good for her. I want her to win the trophy.

You mentioned about forging bonds in the BB house. Apart from Rakhi, who else did you forge a friendship with?

I couldn’t show my bonding with Rakhi on the show. But yes, I had a good bonding with Devoleena. Then, Abhijeet dada and I shared a good bond too. Pratik and I shared a good bond with meaningful conversations. Initially, Rashmi and I had a good bonding too. Shamita and I had a neutral bonding but there was a sense of mutual understanding. She was always in favour of Rakhi and me. All in all, I guess I bonded well. On the contrary, there were times when Karan and I faced trust issues. We had a neutral relation where so name-taking used to take place between us.

Talking about Karan, what’s your take on Karan and Tejasswi’s relationship? How true does it seem? Were they faking it for the cameras? What do the housemates think of it as?

Karan and Tejasswi’s relationship is something personal to them. I wouldn’t comment about that. But I sense a lack of trust from Karan’s side. He doesn’t let Teja talk to others. During the spaceship task as well, Karan, Tejasswi and their group didn’t sacrifice anything. I don’t think I could witness the trust factor here. However, Nishant did his share of sacrifice. To me, this game reflects the fact that there is a lack of trust between the two. The audience should think about it too. Your identity, relationships and your love for others speak volumes during times of any difficulty and sacrifice. A relationship that lacks trust cannot run its course for too long anyway.

Now that you are out of the house, who do you think is the strongest contender in the house besides Rakhi?

I got Karan, Tejaswi, Shamita, Pratik on my wish list! These contestants are playing it well! Karan and Teju have a lot of vote banks! Shamita has been very honest and hardworking. Pratik plays very well too. If he doesn’t get diverted by Devoleena, he might be able to perform better.

Who do you think is the weakest contestant in the house now, and you feel probably you should have been inside the house in their place right now?

Yes. I think Abhijeet dada doesn’t really talk much. He isn’t doing much in the house. He doesn’t really understand how to play the game. There is no physical activity from his side. It seems like he doesn’t take his own stance. It’s only the Weekend Ka Vaar during which he attempts to retaliate on the comments passed. He doesn’t have a strong take on many of the discussions. Rashami once slammed him as ‘Bigg Boss Ki Najaayaz aulaad’. He didn’t take a stand on that. I felt really bad for that! He did get saved from the vote banks but he is currently the weakest contestant in the house.

Talking about you and Rakhi, how did the two of you meet? How was the first interaction like?

It all started from a WhatsApp conversation (chuckles) and then the obvious telephone conversations.

Recently, you spoke in many interviews about the fact that the two of you haven’t been married yet. Could you tell us a little something about that?

Definitely! Seeking the blessings of God, we decided to take our relationship to another level. I had to move overseas, so we had to be in a long-distance relationship. It was the trust in each other that kept us going. My ex-wife (Snigdha Priya) hasn’t agreed to divorce me yet. So Rakhi and I were waiting for the right time. We want to formally announce our wedding.

Inside ‘Bigg Boss’, you seemed like a very decent person. Why do you think your first wife is putting allegations of domestic violence against you?

This is for the audience to decide. These allegations hold no meaning. They are false. I have been troubled since 2014 by her. She married me so she could fulfil certain motives and reap the benefits. Money and standard (of living) play a big role. She feels like she’s from a big house and I’m almost a nobody. I wouldn’t want to speak much about it. I believe that all of us are humans and all work for our greater good so we can lead a life of progression. A man who did so much for her, she just dragged him to the edge of ruination. I have been entrapped in false cases and been an active victim of her victim card strategy. She’s done a lot of it and continues to do so. She has flown away with her nephew twice. After she fled for the first time, I brought her home for the sake of our child. If I am the one who is being brutal to you, why do you even want me in your life? It’s up to the audience to decide. My attempts to scream and shout the truth will go in vain. Here’s what our country goes by most of the time. When a girl puts up an allegation, we consider it as a final verdict and deem her as the right one. Nobody goes to investigate the depths of the truth. I’ll tell you what the truth is. I will unveil all of her so-called truths by arranging a separate press conference with all substantial proof. If a man who earns Rs 2 lakh is considered a lower-class person, whereas she has done a job which would hardly fetch her Rs 20,000 to Rs 25,000, is just a graduate, and deems herself as an upper-class person, I don’t understand her thinking. Everything will be soon unveiled and understood completely.

She even complained of you being brutal…

If a husband was that brutal and kept hitting you for hours, you should’ve reported this before. It’s been so many years since 2014. Why did she file a case in 2017? What makes her so late to address such brutality? And what makes you claim such spurious facts? I have backed all the proofs of money extortion and sent them to the CM as well. But our system tends to work a bit differently. At times, we tend to think that if it’s a girl is raising such issues, she is the one who is innocent and vulnerable and will say nothing but the truth. She plays the victim card really smooth. She has been troubling me since 2017. Her family is hell-bent on my family ever since 2017 happened. There is no stone left unturned in an attempt to ruin me.

Having considered all these, there must be some issues your son must be facing…

I’m still silent (because of that). I long for a sight of him. I have all the happiness in the world today. But this woman… you will get to see how she lives. She stays in somebody else’s house. I don’t want to comment on that but imagine my son’s future. I have been enduring a lot of sorrow only for the sake of my son. I will expose all the truths. Just because this woman is my son’s mother, unfortunately, my child won’t be able to live a life with his head held high. My life was ruined already. I was silent because I understood that this is how our country’s system works. But I’ve had enough. I wasn’t a person who was born with a silver spoon. I have worked really hard all my life to establish my career. She ruined it in a jiffy. I have bounced back after 2.5 years and guess what, she’s back to ruin me.

Did you feel out of place inside the house considering most of the others were popular celebrities and you were more so as a common man?

It wasn’t an out of place feeling as much but I mingled well with many. The results were in my favour too. Karan faced issues as many of his tactics were futile against me. But yes, I was definitely sure that if I reach the elimination stage, I wouldn’t get as many votes as the celebrities. So I didn’t consider myself as a potential winner. Not to forget, the people inside in no way made me feel like I was a commoner. They are good people. Despite the fights and games, I wasn’t made feel this way.

If given a chance to enter as a wild card entry, would you go back to the house?

Definitely! I want to prove to the audience because the allegation imposed on me played a big role in shaping the audiences’ perspective. My strategy to get on odds with Rakhi and form an ally didn’t work well for me. My ex-wife rightly availed of the unfavourable circumstances that I was dealing with. She’s a master at curating such villainous plots. If given a chance, I would definitely want to go to the 'Bigg Boss' house and fix things.