Bihar Chief Minister Gets Flustered Over Speech Getting Disrupted

According to the police, some local level elected representatives had come to submit a memorandum to the chief minister and picked up a quarrel when they were stopped at a distance from the dais. 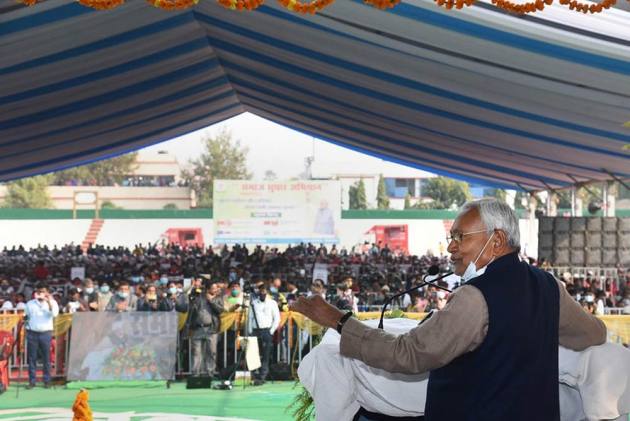 Bihar Chief Minister Nitish Kumar lost his temper when the flow of his speech was interrupted by some people at a public event where he was holding forth on evils of consuming liquor.

Kumar was in this north Bihar district to carry forward his “social reform campaign” as part of which he has been touring the state and holding public meetings against liquor consumption, dowry and child marriage.

“What mischief are you indulging in? Do you have no regard for social reforms? If it is so, leave this place,” snapped the septuagenarian leader, the longest serving chief minister of the state, when a scuffle between some people in the crowd and security personnel caught his attention.

The matter was resolved after the district police chief had a word with the agitated people, though not before they had received a tongue lashing from the chief minister.

“This meeting has been primarily organised for women. You people have been allowed to watch. Do you think social awakening is required only for them and not for you men?” said a visibly upset Kumar. “If you have any grievances, meet me when I am through with the function,” he added.

Kumar resumed his speech, holding forth on the evils of drinking, marrying off girls at an early age and demanding dowry. It was, however, not known whether the chastised members of the crowd got an audience with him.

The chief minister launched his “Samaj Sudhar Abhiyaan” on December 22 and he has, so far, toured East Champaran, Gopalganj and Rohtas districts.

His much-touted move of banning sale and consumption of liquor has been under scanner since hooch tragedies around Deepawali claimed more than 40 lives and police went into an overdrive to strictly enforce prohibition.

Fresh embarrassment for him came in the form of Chief Justice of India N V Ramana's averment last week that the prohibition law in Bihar suffered from a “lack of foresight” and has resulted in higher judiciary getting “clogged with bail applications”.

Nonetheless, Kumar has chosen to dig in his heels, asserting that no exemption will be granted even to people coming from outside and they “need not visit Bihar if prohibition inconveniences them”.

Invoking Mahatma Gandhi's well-known disgust for liquor in support of prohibition in Bihar, Kumar has also been calling for public shaming of those caught flouting the law in the state.

Sale and consumption of alcohol was completely banned in the state in April, 2016, in line with an electoral promise Kumar had made to women ahead of the assembly polls held the previous year.

He has been maintaining that the bold move has resulted in lower crime rate and better standards of living for many people which more than makes up for the loss of excise revenue.